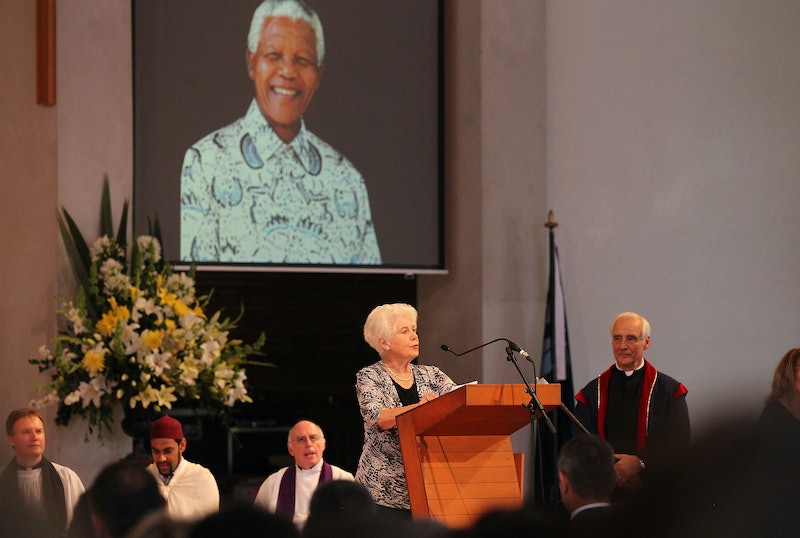 Bidding a last farewell to their beloved Madiba, South Africans buried Nelson Mandela in a state funeral Sunday. The service, which drew over 4,500 guests, was held at his ancestral home in Qunu, 450 miles south of Johannesburg. The former South African president and civil rights hero died last Thursday at age 95, leaving a country devastated and acutely aware of its dissatisfaction with its current administration.

Although the public televised service drew a large gathering — including civil rights activist Reverend Jesse Jackson and Oprah Winfrey — the family requested that the traditional Xhosa burial be attended by only a few hundred. "He really believed this is where he belonged," said his daughter, Maki Mandela. Because Nelson Mandela was a chief of the Xhosa ethnic group, the burial involves several traditional rituals, including slaughtering an ox, placing beside him objects he liked and used during his lifetime, and speeches by the tribe's elders.

"We may be drowned in sorrow and grief but we must be proud and grateful that after the long walk paved with obstacles and suffering we can salute you as a fighter for freedom," said Ahmed Kathrada, an old friend of Mandela's who had been in prison with him at Robben Island. "Farewell my dear brother, my mentor, my leader."

The passing of the acclaimed former freedom fighter has thrown the current leadership into sharp relief, with much attention being focused on current South African President Jacob Zuma, who has recently come under fire for using public money for private endeavors. "Today marks the end of an extraordinary journey that began 95 years ago," Zuma said during the ceremony. "It is the end of 95 glorious years of a freedom fighter ... a beacon of hope to all those fighting for a just and equitable world order."

According to a recent survey conducted for the Sunday Times, 51 percent of registered voters want the current South African president to resign — a large percentage of them were swayed by the recent allegations that Zuma had recently spent roughly $20 million dollars on a security upgrade for his house. The accusations caused such a stir that Zuma was actually booed by crowds when walking onstage at Mandela's mass memorial earlier this week.