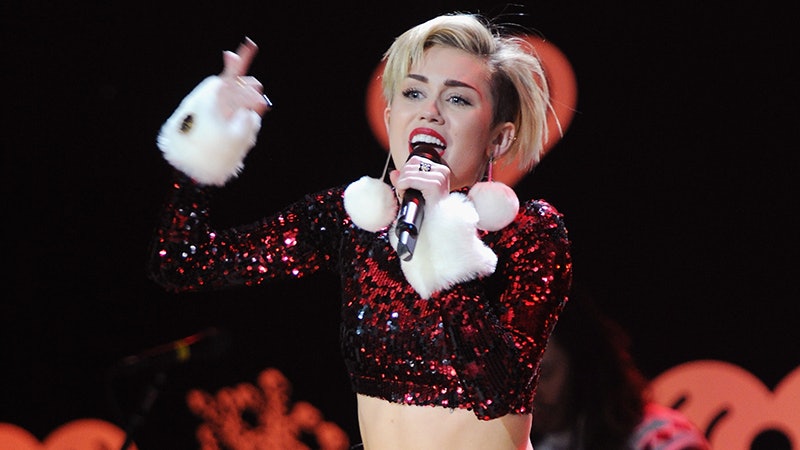 Say what you will about Miley Cyrus. Say she appropriates everything she can get her hands on, say that she is another Lady Gaga/Katy Perry/(But really originally Madonna) knock-off, say she is a giant tacky Internet troll, say whatever. It's probably true, at least partially if not fully for all of those, so whatever. But really, we should be grateful to Miley Cyrus, in some small way. Because Miley Cyrus is proving that our boob hang-ups are bullshit.

Some background: Miley Cyrus shows her boobs a lot. That's all the background you need. There was the time she did that photoshoot with Terry Richardson, in which her boobs were present and accounted for. That was hardly the last time — or the first. Kathy Griffin even had a bit in her stand-up about it — which you can see below; it starts at about 9:00 minutes in — recalling taking a photo with her where her nipples are clearly visible. At some point Cyrus (allegedly) says something along the lines of "if you had these, would you hide 'em?"

Basically: Miley Cyrus does not have any hang-ups about her breasts. For her they are just another body-part that she can flash to the world (she feels the same about her tongue). The world around her, however, is obsessed.

The fact that the world is obsessed with breasts is in now way new information, so I won't go too far into it because you've heard it all before. Just remember that approximately half the population (probs more) have breasts of some kind, and we all (more or less) have nipples, and yet only the population that has those aforementioned breasts are forbidden (in most places) from showing them in public.

No, those are left for our at-home activities, our movies, and our Internet searches. Which is a big part of why, every time Miley Cyrus ignores her shirt and thrusts her boobs out into the world, you see about a thousand articles talking about it — our world is so obsessed with young boobage that it automatically becomes SEO gold.

It's kind of fitting that Cyrus' most recent public boob discourse actually has less to do with shock value or Disney-distancing and more to do with opening up that very discussion: Dozens more articles have gotten to pop up with "Miley Cyrus boob" (which supposedly makes for more clicks, happy advertisers) due to the singer's campaign for Free The Nipple .

It seems like a rather self-aware campaign on her part, actually. She posts a picture that draws all attention to her breasts without actually showing her breasts, the Internet responds by writing it up every chance it gets (this article being no exception), everyone gets page clicks and/or publicity, and it's a nice celebrity-media symbiotic relationship playing off of strange patriarchal mores of shock value that the Puritans left deep inside us (damn Puritans).

A boob is a boob is a boob. They come in many different sizes and shapes and bounciness and they exist on roughly half the population, but we still freak when Lindsay Lohan maybe included part of her aureola in an instagram. These people — Miley Cyrus and Lindsay Lohan, as well as million other women around the world — are not freaking out over whether or not the world sees their boobs. It's not their hang-up.

In fact, this whole issue is a little bit akin to that sex-positive plug Evan Rachel Wood's on right now for her latest movie — that not-inconsequential pattern wherein female sex (and sexual pleasure) is censored far more than violence or male pleasure. But c'mon, guys: Sex and boobs? These are literally some of the most natural things in the world. They are how the human race exists — sex and then the feeding of the little baby things that can often result from the sex. And surprise! They still exist even without the presence of the little baby things! Why are we still "shocked" by that?