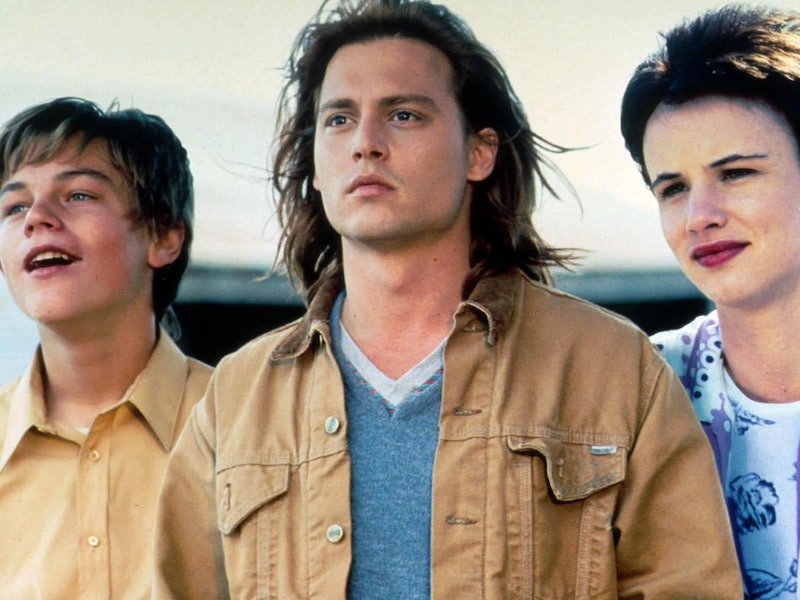 On December 25, it will have been 20 years since What's Eating Gilbert Grape hit the big screen in 1993. It was the first time Leonardo DiCaprio made us take note of his name, and it was during a time when Johnny Depp was still accepting roles that didn't turn him into a pirate, vampire or creepy chocolate factory owner. To celebrate 20 years since the tear-jerking and heart-warming family flick was released, here's nine things you might not have known about Gilbert Grape (the movie, not the man).

1. Darlene Cates, the actress who played Momma, only climbed the first couple of stairs in a scene where she tackles the entire staircase in the film. The footage was recycled to make it appear as though she made it to the top. (And her "upstairs" room, was actually a set built downstairs.)

2. Also, that photo of Momma as a young woman is a real pic of Darlene Cates.

3. You know that scene where DiCaprio slams the grasshopper in the mailbox and decapitates him? Well, he wasn't actually supposed to kill the little guy. Here's what he said about the incident:

I didn't know I wasn't supposed to kill him. They said put the head in and slam it. So I killed one and that is the take they used. There was a whole bunch of animal rights people on the set to make sure that the grasshopper didn't get its head chopped off, and I didn't know, and they complained. But it was too late when its head was on the floor. But if you think about it, an animal rights person for a dirty little grasshopper?! I mean, that's a bit ridiculous, don't you think? I think they should be helping some homeless people or something...

4. Gilbert Grape was Darlene Cates first and only film role.

5. Depp and DiCaprio were youngsters when they starred in Grape, so it's no surprise their playful nature translated off screen, too. On a bet, Depp dared DiCaprio to smell a rancid pickled egg, and paid DiCaprio $500 when he did it.

6. Cates hadn't left her home for five years when the film was released.

7. DiCaprio created a distinctive gesture for Arnie, that of pushing his forefinger against his eyes and then nose. "It's like a brain wipe... like Arnie is massaging the inside of his brain. I would stare at something and drift off into another dimension, and then I could do anything spontaneously in any scene because Arnie was completely unpredictable," he said of the gesture.

8. The interior of the Grape's house was the same set used for the 1980 film, The Roadie.

9. "Momma"s real name in the film is Bonnie, but she is credited as simply "Momma," because the only people who she ever converses with are her kids.

More like this
The 'Hocus Pocus' Sequel Finally Has A Release Date & It Makes Total Sense
By Shannon Barbour and Radhika Menon
David Schwimmer Doesn't Remember This Classic 'Friends' Episode
By Sam Ramsden
Hayden Panettiere Will Return For 'Scream 6': "We F*cking Won, Scream Fam"
By Jack Irvin and Jake Viswanath
8 Creepy Things You Probably Did In The '90s
By Julie Sprankles
Get Even More From Bustle — Sign Up For The Newsletter