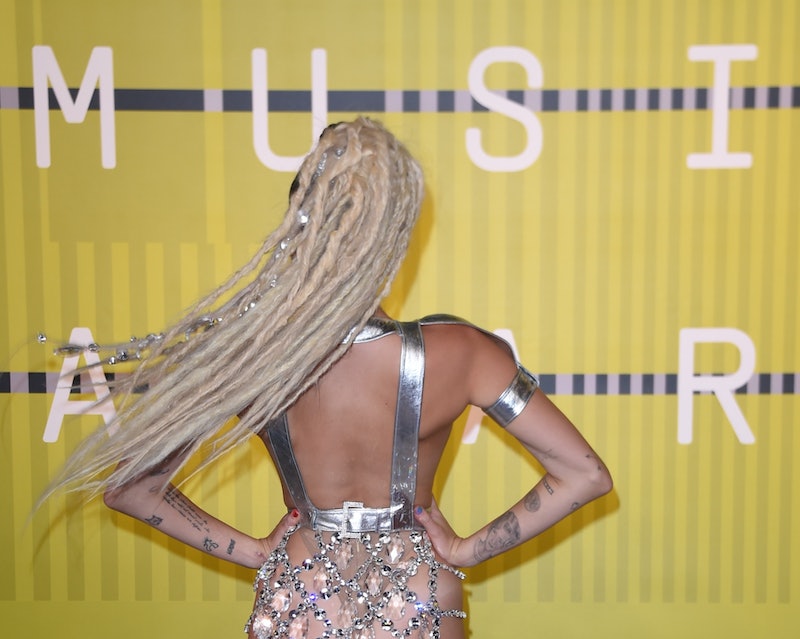 There are some things we shouldn't be surprised by at this point in our lives. A nearly-naked Miley Cyrus doing something controversial at the VMAs is totally one of them. Unfortunately, the controversial thing this year is Cyrus wearing fake blonde locs to host the show. As of late, it seems like Cyrus' disruptions of social norms have been upsetting nothing but the status quo, and helping move things in a positive direction. But tonight, she has what feels like just about every single person on and off Twitter seething.

It wasn't that many VMAs ago when Miley Cyrus' twerking and placement of women of color as background props were called out as culturally appropriative, racist acts. Her blonde locs this year are eliciting the same response, so it kind of feels like she hasn't taken the time to learn from the people asking that she acknowledge her white privilege. The fact that Cyrus sporting locs could potentially be seen as "edgy" and "fashionable," while Zendaya's dreads basically got her called a "dirty hippie" is a prime example of why this isn't OK.

I absolutely understand wanting to be edgy, or feeling a desire to push back against heteronormative ideals or the gender binary. But purposefully doing something that marginalized people have indicated is harmful to them — like appropriating black hairstyles — is the opposite of that.

Actress Amandla Stenberg has laid this out several times, including in her comments regarding a picture of Kylie Jenner in cornrows: "When u appropriate black features and culture but fail to use ur position of power to help black Americans by directing attention towards ur wigs instead of police brutality or racism." This was only a month and half ago, and was all over the news and social media. Still, Cyrus felt entitled to her "edgy" hairstyle.

But maybe you're still thinking, "What's the big deal?! It's just hair." Writer Maisha Z. Johnson explained that the significance of black hairstyles goes far beyond appearances on Everyday Feminism:

"We’re told that we’re not beautiful, especially not when we look most like ourselves. Oftentimes, the same people who appropriate elements of our culture are completely absent when we need support.And then we find a treasure that helps us challenge those abusive narratives, helps us recognize our value and be proud our heritage, even after a lifetime of degradation. Even after being violently disconnected from our ancestors and having our history erased, sometimes directly through suppression of our natural appearance.And that treasure is our own hair, which becomes more than just hair — we grow to understand that it’s one of the precious tools we can wield to help us affirm our worth and embrace our roots."

Earlier this year, Bustle's own Charmaine Simmons broke down how to keep cultural appreciation from becoming appropriation. It seems like that's a lesson that Miley Cyrus — and all white people, for that matter — could probably stand to learn.