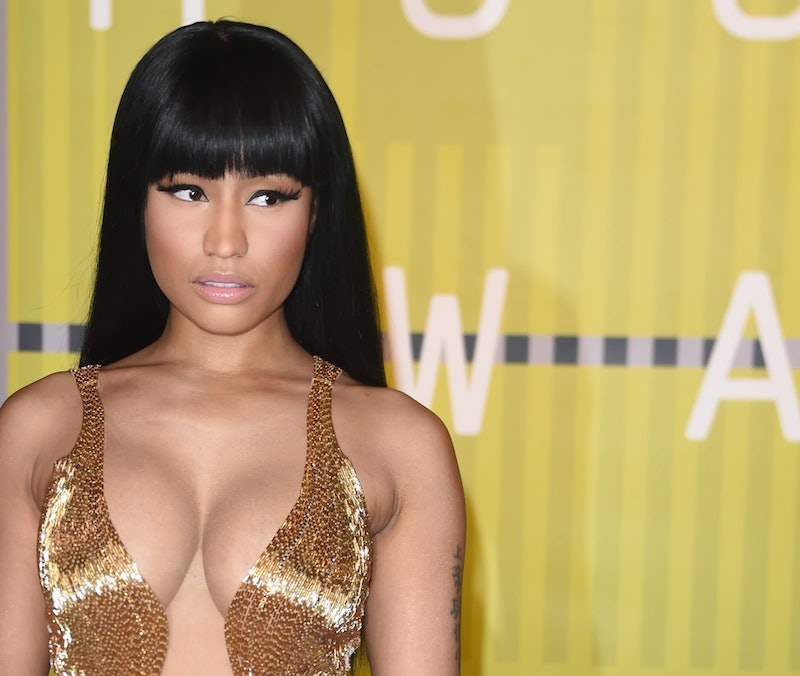 As one supposed feud ends, another begins? It seemed that way at the 2015 MTV Video Music Awards on Sunday night, as Nick Minaj accepted her VMA award for her video "Anaconda" for Best Hip Hop Video. She ended her acceptance speech with some choice words for the show's host. So, why is Nicki Minaj angry with Miley Cyrus? The rapper ended her speech by saying "And now back to this b*tch that had a lot to say about me in the press. Miley, what’s good?" Ouch. But there's definitely a story behind those intense words.

Well, it all started a few days ago, when Cyrus told the New York Times her own take on the supposed Twitter feud between Minaj and Taylor Swift from a few weeks ago. The NYT interview actually spends a lot of time on Cyrus' view on female pop stardom, and she talked specifically about Minaj and alluded to her anger having to do with jealousy.

Here's what Cyrus told the NYT:

What I read sounded very Nicki Minaj, which, if you know Nicki Minaj is not too kind. It’s not very polite. I think there’s a way you speak to people with openness and love. You don’t have to start this pop star against pop star war. It became Nicki Minaj and Taylor in a fight, so now the story isn’t even on what you wanted it to be about. Now you’ve just given E! News “Catfight! Taylor and Nicki Go at It. I know you can make it seem like, Oh I just don’t understand because I’m a white pop star. I know the statistics. I know what’s going on in the world.

Minaj has made clear that her words during the Swift "feud" were about race and the music industry as a whole, and it seems Cyrus has missed that point. And judging by Cyrus and Minaj's exchange of words during the VMAs, they still aren't on the same page.