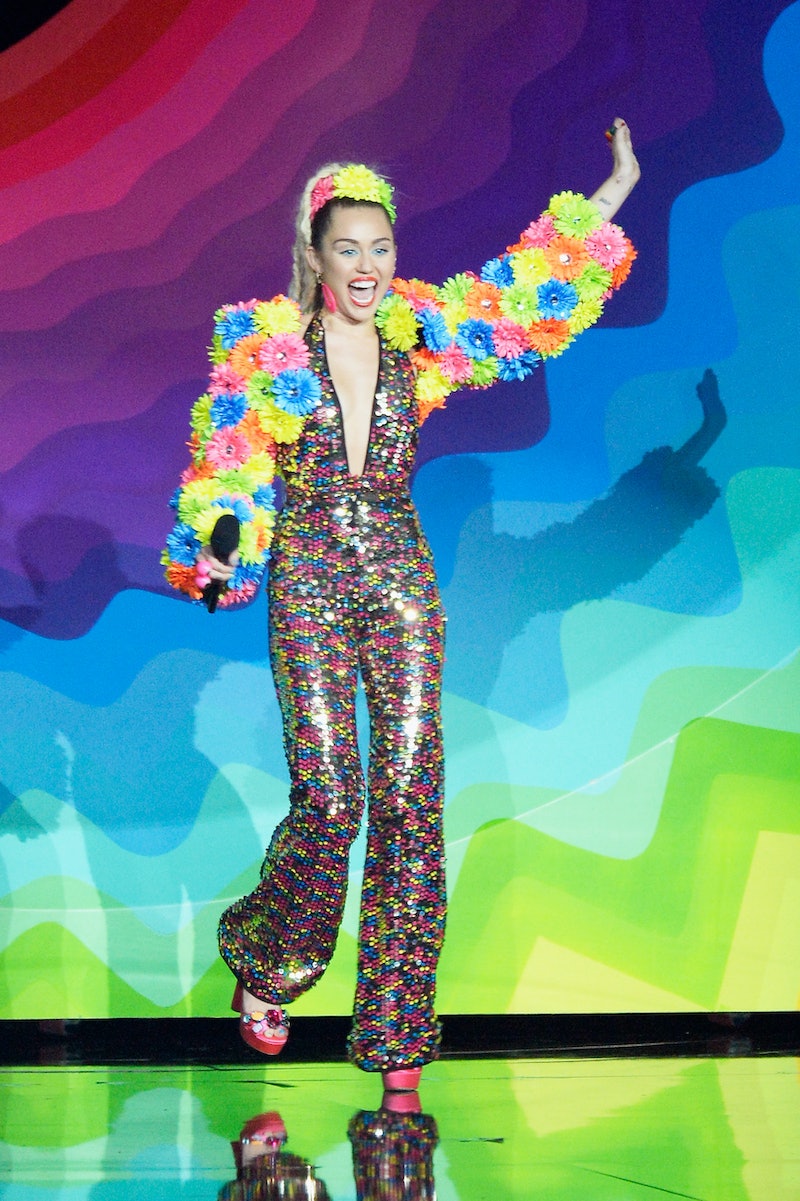 Miley Cyrus had one heck of a night at the MTV Video Music Awards. No one was sure what to expect out of the edgy, outspoken star, but Miley Cyrus' VMA outfits certainly did not disappoint. Whether it was her hosting duties or her fashion choices, the night was kind of up in the air in terms of what would go down with Cyrus. The best of Cyrus's night, though, was definitely her eccentric, but very Miley styles for the night. From her pink, metallic suspenders and sparkling bikini bottom to her eyeball bra top, each look was better (and more insane) than the next.

Prior to the show, there had been quite a bit of speculation as to what the hostess would rock both on the carpet and on stage. Many had suggested that the star may appear completely nude at the event, and while she didn't actually take it that far, she came pretty darn close. Cyrus did keep with the same vein as her much discussed VMA promos though. Strategically placed suspenders and bras were her friends, and she kept her short locks pulled back off her face. While, there aren't comparisons for al of Cyrus's outfits, questions have been raised as to whether or not she's been channeling Barbarella or a sexy firefighter tonight. Regardless, Miley kept true to her signature— and out there— look, and she deserves major props for her unique and awesome confident style.

So, what exactly did Miley rock for the evening? Here's a rundown of her looks, from carpet to close!

There was definitely some sticky tape involved in this number.

Definitely a Studio 54 throwback, no?

It's all very sexy Zenon: Girl of the 21st Century.

Not going to lie, totally love the lip skirt.

Strategy is key with Miley outfits.

Something about this reminds me of those '90s neon raincoats.

Some thought this was overkill, but I dig Miley's message.

Sparkle is a big trend tonight.

Definitely going to try to pull this look off for fall.

She definitely knows how to go out with a bang.

More like this
Twitter Can’t Get Enough Of Lewis Capaldi Creating Fashion Looks For ASOS
By El Hunt
Here Are All 703 Outfits Rachel Wore On Friends
By Kat George
Dua Lipa On YSL Beauty, Plus Her Fearless Approach To Hair & Makeup
By Erin Stovall
The Best Looks From Miami Art Basel 2022
By Dominique Norman
Get Even More From Bustle — Sign Up For The Newsletter