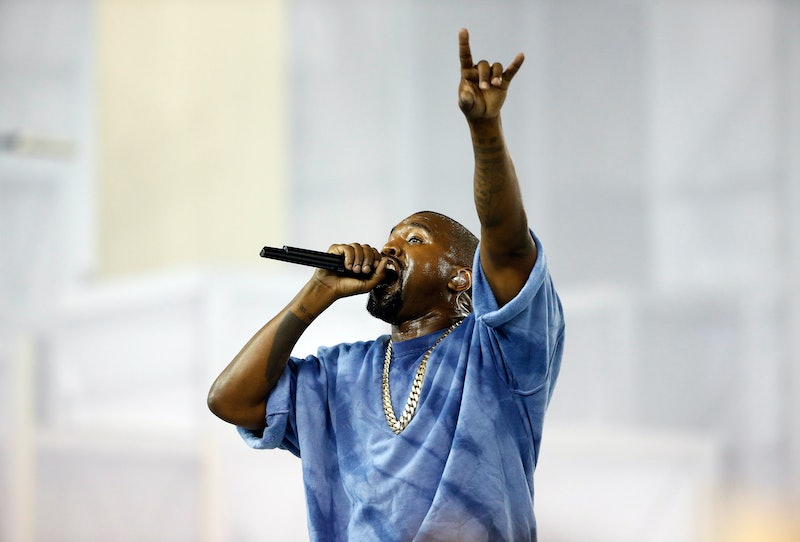 During his epic Video Vanguard Award speech at the VMAs Sunday night, Kanye West talked Taylor Swift, the very nature of award shows themselves, and... running for president in 2020. Kanye finished his accepted speech with, “And yes, as you probably could’ve guessed by this moment, I have decided in 2020 to run for president." Actual mic drop. The crowd went crazy, shrieking at West as he wandered down the stage towards Swift — who in a perfect one-eighty had been the one to give him the award — and his wife Kim Kardashian, who looked thrilled at the prospect of becoming First Lady.

"Trump, you had my vote... but Kanye West for president!" Miley Cyrus crowed on stage when she stepped back on. Which might actually be a bit of a diss — considering Trump is about as far removed from Cyrus as anyone could be, it's unlikely that Trump ever had her vote. Plus, comparing anyone to Donald Trump is pretty offensive. If Miley was really thinking about voting for West 2020, she probably would have said something more along the lines of, "Hillary, I'mma let you finish, but Kanye West is about to have one of the most successful presidential campaigns of all time." (You can use that line, Miley. You have my permission.)

Look, stranger things have happened than Kanye West running for president. Like Kanye West and Kim Kardashian, two celebrities nobody would have paired together, finding love and finally settling down together. Like Ronald Reagan, a silver screen legend, abruptly changing career paths and running for president — and making a great one, no less.

Not long after his announcement, Kanye tweeted:

Well, that settles it. Should Hillary make it into the White House next year, she'll have to go head-to-head with Kanye West. You ready, Hilz?