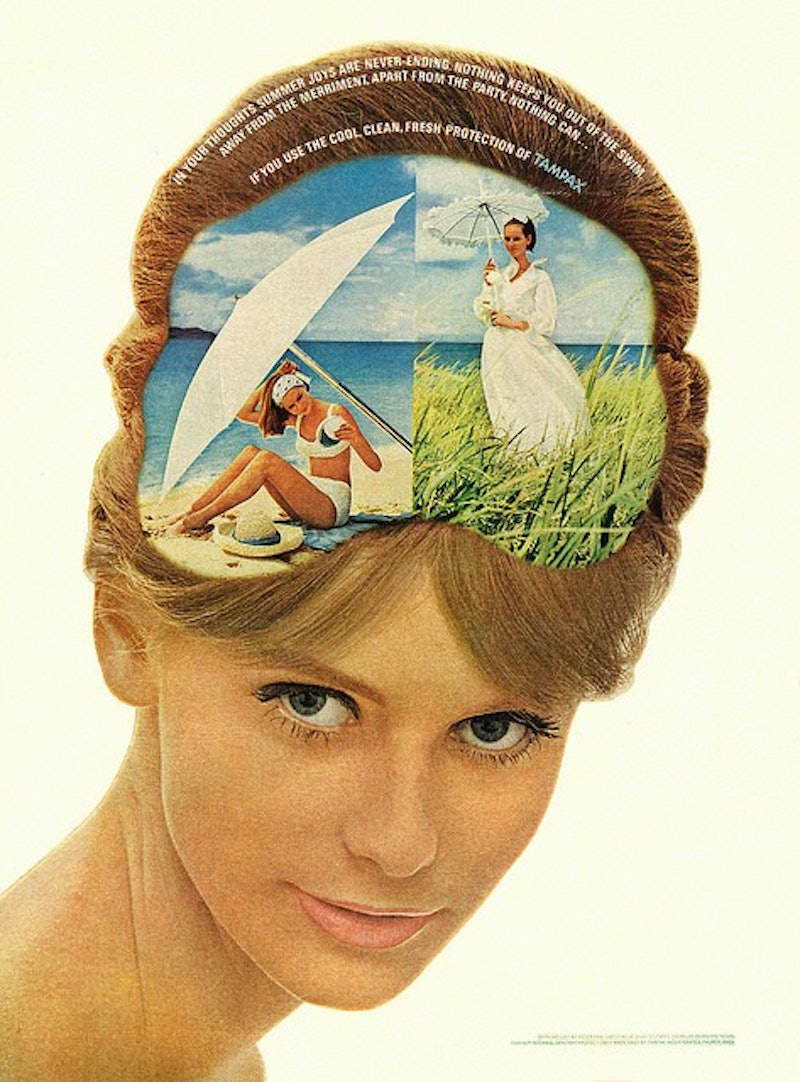 The next time you catch an ad for a tampon or pad, as silly as they can be, you should count your lucky stars. We've only been able to see advertisements for sanitary products for less than a century, due to concerns about "public decency." (Presumably, once reminded of the existence of menses, the populace would riot out of sheer disgust.) And even then, they've mostly been sexist, bizarre, or just plain silly. Something about periods, it seems, has made advertising departments throughout history get all squeamish. I mean, it took us until the '90s to actually say the word "period" or mention blood in most ads, rather than papering the whole thing over with euphemisms and cheerful women in white pants.

The big sin of tampon and pad ads has been an almost fanatical delicacy. The blue dye in the place of actual leaky women-blood. The priority on preventing "embarrassment," as if revealing that you are an adult female will likely lead to your lynching. The refusal to mention any possible cause or need for a pack of cotton in your nethers. It's all been geared toward selling a product while studiously avoiding any mention of why you would ever need it. It's like fearing saying Bloody Mary 13 times in the mirror — only in this case, Mary might show up waving a Mooncup and bleeding all over her own thighs.

So prepare yourself. Here are the nine most ridiculous period-related ads in history. They're picked for their sheer sexist nonsense, their outrageous crimes against menstruation, or for just being pleasing bundles of lunacy.

No, this is not a joke. The Protecto Bloomers are found in numerous catalogs in turn-of-the-century America. Because what women really want when they're shedding their uterine lining is the equivalent of a tire's inner tube between their thighs. I'm a particular fan of the ventilation side-openings, and the fact that they're reversible. Because who doesn't want to look like Amelia Earhart at that time of the month?

Let's bring this back, guys, I'm tired of sanitary products that don't need their own traveling suitcase.

This glory is based entirely on the fact that an educated person couldn't guess that there are sanitary liners in this lovely, pretty box. Because the mere idea that a woman could want something that stops her from dribbling blood on her own clothing, and buys it using her own initiative, is so powerfully shameful that it's caused Modess to pretend they're Christmas presents.

This is a hilarious example of sexism in advertising against basically everybody. They have a partner ad to this one alleging that Pursettes are great for "unmarried girls," essentially because they're tiny and will fit into a vagina that hasn't yet been widened out by man-mining. And this one helpfully reassures women who've made their birth canal into the Suez by pushing out a baby: They're suitable for you, too! What champions.

Note how there is absolutely no mention in this of a period causing the cheerleader's nervousness. You could very well get away with thinking that her problem was repressed lesbianism — until a helpful voiceover reassures us that tampons are useful for "special days." If I were an American teen watching this, I'd get very confused during the holiday season.

5. The Bouffant With A Mind Of Its Own

Surprise: This one's from the '60s. And there's nothing really wrong with it — well, aside from the idea that women are still wandering through fields with white parasols, looking like extras in A Room With A View. No, the terror here is the bouffant. It's there, staring at you, looking deep into your heart. It knows all your secrets, particularly the menstruating ones. It can hear your dreams.

6. The Incomprehensible Slang One

This one has particular merit for being, well, basically unreadable as well as being sexist. Girls are meant to be "gay and gurgly" (which is NOT a word), rather than letting "some pretty prowler blitzkrieg their man." Because women must always smile and be cheerful, regardless of their own feelings; otherwise, their man will leave them. "How do up-to-date and dated-up girls manage?" Kotex, apparently. But with all that repression of their own emotional needs, I am also guessing Valium.

7. The One Where The Dove Is Your Period

Haven't we all changed a tampon or a pad, felt the first horrible cramp in our abdomen, or got a splitting hormonal headache, and thought "This is the equivalent of handling a gentle, very clean bird"?

In this '80s gem, we see the usual white-clad dancing woman surrounded by white flowers. But the dove who flaps the second anybody might start mentioning menstruation or the female body? That's a master flourish.

8. The One Disguised As A Manners Guide

This is particularly special because it shames you on four different levels. Not only are you shameful for bleeding everywhere, but you're also useless because you don't know about makeup, glove etiquette, job applications, or tanning protocol. What is the use of you? Why haven't you been put in prison yet?! The idea that good tampon use is part of ordinary female manners could have been reasonable, but this "in the know" etiquette guide ends up being ridiculous. (Also, you totally can wear cerise with a tan.)

9. The Threat Of The Servant Class

My everlasting favorite. Stop pissing off the servant class by bleeding all over things and then asking them to clean it up. The visual here is also spectacular. Look at the glowering laundress and the apologetic flower-arranging lady of the house! The veiled threat — "Ask me to clean up ONE MORE BLOODY NAPKIN and I'll make you EAT IT" — is so great they should teach it in Marxism 101 at college. Tampons: Preventing a proletariat uprising since 1932.