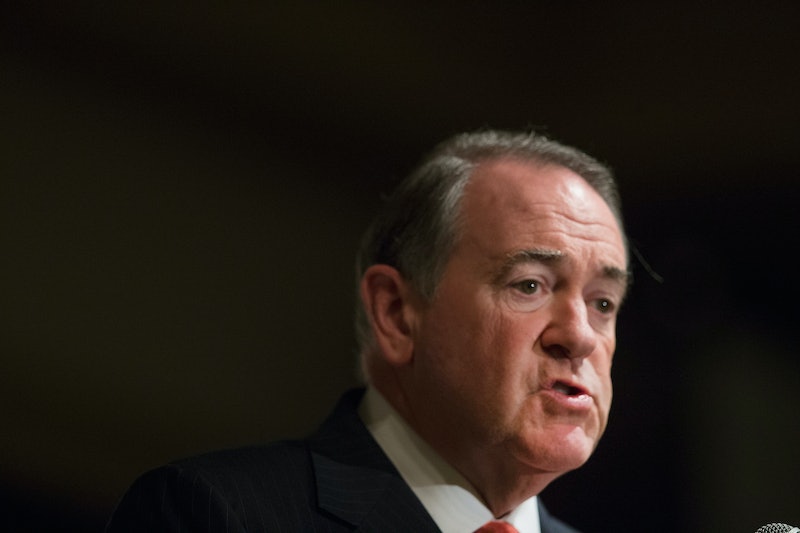 During a campaign stop in Des Moines, Iowa last week, presidential hopeful Mike Huckabee took his conservative views on women's reproductive lives to a whole new level. He compared abortion to the terrorist actions of ISIS. After talking about the threats of ISIS, Huckabee said: "Let us not be too smug in this country. Because we have sins to answer for. Since 1973, 60 million unborn children have died in their mother’s womb." He promised to protect unborn life if elected president by making fetuses legal citizens protected by the Constitution. Equating abortion to ISIS is misguided on many levels. Not only does it exaggerate America's "abortion problem," but also devalues the threat of ISIS and the lives lost in the militants' violence.

Huckabee didn't stop at that ridiculous comparison, either. He went on to say that America's abortion "problem" is of the same caliber as slavery once was. And while most Republicans were focusing their anti-abortion efforts on defunding Planned Parenthood, Huckabee thought that wasn't nearly enough. He said: "What we need to be doing with abortion, and the destruction of innocent human life, is what Lincoln and the early Republican Party did with slavery 130 years ago, and that is bringing abolition to it."

Claiming that abortions are equivalent to ISIS' violence in Iraq and Syria (which has led to so many deaths so quickly that statisticians can't keep count, four million displaced Iraqis, a widespread sex slave industry, and tortured children) grossly exaggerates the so-called "problem." Even if you oppose abortion, it doesn't make sense to claim that terminating unwanted or dangerous pregnancies is the same as the brutal attacks and prevailing fear that ISIS brought upon an entire region. While there are varying beliefs on whether or not a fetus can feel pain, men, women, and children definitely can.

Huckabee's absurd statement diminishes ISIS' reign of terror, making it seem as though it's not a dire crisis. Abortion has been legal in the U.S. for more than 40 years, and the country isn't falling apart because of it. Iraq and Syria can't say the same of the three years ISIS has been gaining power. Huckabee's comparison also devalues the thousands of Iraqi and Syrian lives lost. These were people who had lives, emotions, and thoughts — it's not fair to them to equate their lives to unborn fetuses. The same is true of his comparison between abortion and slavery; such strong actions had to be taken to end slavery because living people were suffering.

Abortion is not the same as ISIS' actions, and it's not the same as slavery. Huckabee has every right to preach against abortion, but comparing it to global humanitarian catastrophes is insensitive and misleading.