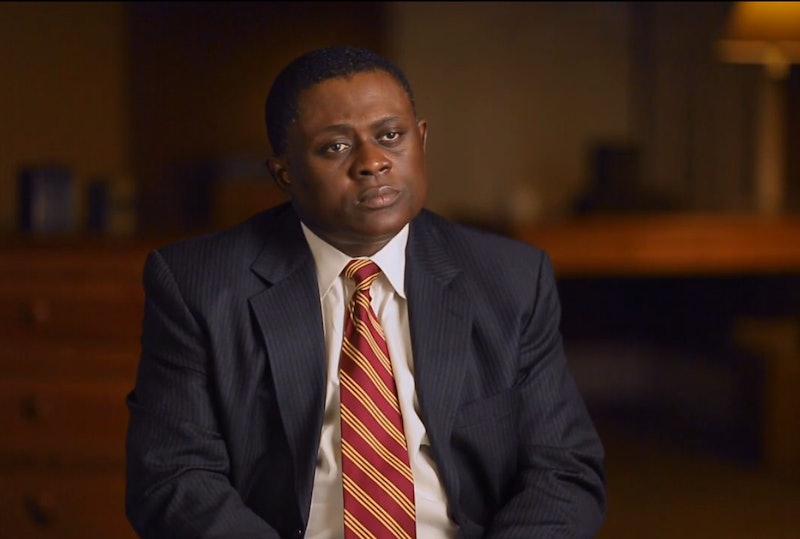 The trailer for Will Smith's new movie Concussion was released on Monday, and it's already expected to ruffle a few feathers. Smith's newest film tells the true story of a Nigerian-born doctor who discovered a disease in the brains of professional football players, and it will likely make many Americans rethink the dangers of football and how the NFL functions. So who is Bennet Omalu, the real-life doctor portrayed in Concussion ?

Omalu, a 47-year old forensic neuropathologist, discovered chronic traumatic encephalopathy (CTE) in 2002, after performing an autopsy on former Pittsburgh Steelers star Mike Webster. Webster died of a heart attack at the age of 50, after years of depression and dementia that eventually led to him becoming homeless and forgetting how to do basic things, such as eating. From examining Webster other football players, including Dave Duerson and Andre Waters, Omalu determined that repeated head trauma from the sport causes a brain condition that leads to memory loss, impaired judgement, impulse control problems, aggression, depression, and eventually progressive dementia. Doctors knew that boxers suffered brain problems after years of continuous head trauma, but Omalu was the first person to associate the same issues with football players.

The discovery of CTE raised questions nationwide about whether football could ever be truly safe — which obviously didn't sit well with the NFL or football-loving Americans. After Omalu published his findings, the NFL sent a letter to one of his colleagues accusing him of fraud. Omalu told Frontline in 2013: "They went to the press. They insinuated I was not practicing medicine; I was practicing voodoo." Because Omalu is from Nigeria, some people said that he was "attacking the American way of life." Omalu told Frontline that he was asked, "How dare you, a foreigner like you from Nigeria? What is Nigeria known for, the eighth most corrupt country in the world? Who are you? Who do you think you are to come to tell us how to live our lives?"

The NFL did make some changes after Omalu's newly-discovered disease gained more attention. In 2009, the league instituted concussion management guidelines, which include neuropsychological testing on all NFL players to help determine when a player could return to play after a head injury. When Omalu heard about the new standards, he told GQ: "You mean they never had any concussion guidelines before now? Geez."

In a statement released to FOX Sports, the NFL said about the new film: "We are encouraged by the ongoing focus on the critical issue of player health and safety. We have no higher priority. We all know more about this issue than we did 10 or 20 years ago. As we continue to learn more, we apply those learnings to make our game and players safer."

More like this
Jake Daniels Just Became The UK’s First Active Football Player To Come Out As Gay Since 1990
By Sam Ramsden
What Is Jeanie Buss' Net Worth? The Lakers President Is Uber Rich
By Hugh McIntyre
Rebekah Vardy & Coleen Rooney’s Trial Has Officially Begun
By Bustle UK
Twitter Was Saying The Same Thing About Sam Ryder’s Surprising Eurovision Result
By El Hunt
Get Even More From Bustle — Sign Up For The Newsletter