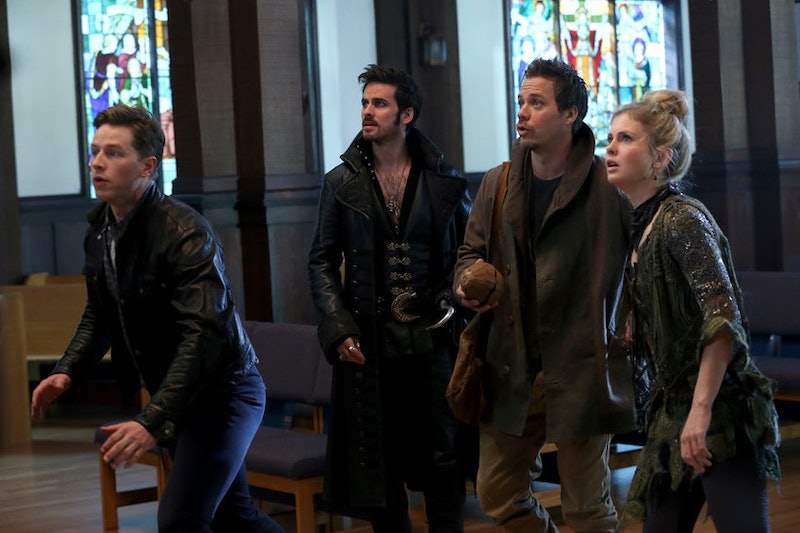 Just when you thought there was a happy ending in sight, ABC's Once Upon A Time let everyone know that magic and happiness has a price. Sunday night, on the show's midseason finale, we lost a main character, the town of Storybrooke, and everyone's memories. And so the show will begin again, fresh, when it returns in early March 2014 with everyone returned to their rightful home in the Enchanted Forest except for two very, scratch that, extremely important characters: Henry and Emma.

The main action really pulled at our heartstrings— we were forced to watch the entire cast endure so much at the hands of Pan both in Neverland and back in Storybrooke. Rumpelstiltskin realized the only way to end Pan was to end himself and Regina realized that the only way to end her curse was to end Storybrooke once and for all. "Magic always comes with a price," after all, people. You should know that by now (mostly because that line sneaks into the dialogue every episode). All of the town's original residents were wiped off the map with it and returned to their respective lands while Emma and Henry drove away towards New York City (where they live in a ridiculously awesome apartment that will make you wonder how she can afford it).

Regina's last act of love towards Henry was to give him and Emma and slew of memories, as if Emma had never given him up for adoption. Essentially, Regina gave them a chance at their own happy ending. Which is really sweet, if not one of the saddest things we've ever watched. Regina loved Henry, in a misguided and selfish way, but loved him nonetheless. Sacrificing herself for people she only likes 80 percent of the time (and that's being generous) was a huge step for her.

Now that Pan's gone, there's a new evil coming — which, according to the short preview of the show's return, looks like it will be in the form of the Wicked Witch of the West in all of her green glory. Also, in the last few minutes of the episode, we learned that Hook still has the power to sail between worlds, and he's figured out where Emma's new sick apartment is in order to tell her that her family (who she doesn't remember anymore) is in danger. (This gives us immense hope that those two will finally get together!) Of course, Emma had no idea who Hook was and threw him out of her place, but we have a feeling she'll come around. Between her own curiosity and Henry's incessant whining, there's no way that those two won't end up on Hook's ship prepping for their magical journey to the Forest.

We also have to wonder about Emma's family and the rest of Storybrooke's residents who are returning to their lands after a prolonged siesta in the real world. What awaits in the Enchanted Forest obviously won't be welcoming (because what kind of fun would that be?). Snow, even though she's not supposed to remember Storybrooke, somehow remembers enough to say, "We're back," when the cast meets up with long-forgotten favorites Aurora, Mulan, and Prince Phillip in the preview. A new bad witch in town means trouble for Regina, who's used to being the magic kingpin, and it means trouble for everyone else trying to safely make their way back to their respective homes — assuming that they remember where they are.

In terms of Rumpel, excuse me for preparing myself for the big surprise that he's not actually dead and just living the non-magical life. He deserves a happy ending with Neal and Belle by his side. Also, Belle's been through more than enough, so I'd say she deserves that happy ending too. It also would be exactly like him to figure out a way to turn his death into a second chance for himself, because there's nothing he wants more in all of the worlds than a second chance with his son.

Once Upon A Time has officially given us a reason to never underestimate it again following this shocking and game-changing midseason finale. Adam Horowitz and Edward Kitsis introduced many possibilities for the rest of the season ahead by erasing Storybrooke and sending the two saviors of magic off to drink hot cocoa with cinnamon for breakfast in New York. Amazing things are going happen, including, undoubtably, a new romance between Hook and Emma. So, though we're pissed we have to wait until March for Once Upon a Time to return, it's impossible to not be excited about the days ahead. Who doesn't love a fresh start?