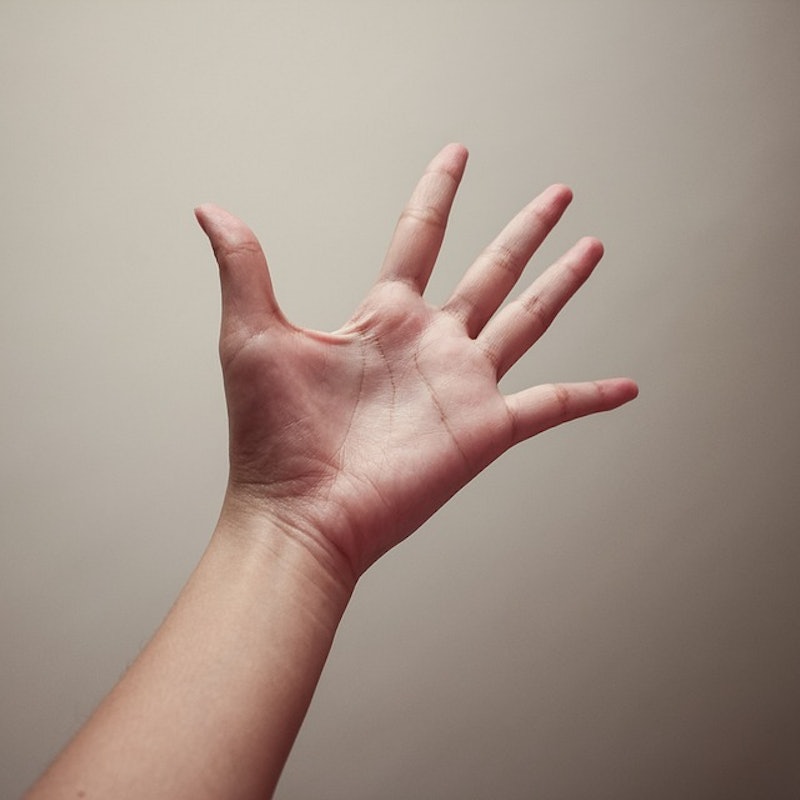 Hands are expressive by nature: With a friendly wave, you can say “Hello!”; with a simple touch, you can say, “I’m sorry”; with a single finger, you can say … well, something not very nice. But some people believe that hands can convey a lot more — that everything from the lines of the palm to the shape of the fingers can provide insight into someone’s character. If you’ve ever wondered what your hands are saying, this handy (see what I did there?) guide to palm reading may help you to see yourself (and your hands) in a new light. And once you’ve mastered the basics of palmistry, you can go forth to startle and amaze your friends with your eerily accurate insights and predictions! … Or at least start potentially interesting conversations with them about who they are and what they want. Either way, it’ll be fun, right?

Palmistry is an ancient practice dating back thousands of years. Based on the premise that the hands possess clues about one’s character and future, palmistry has roots in ancient China, Tibet, India, Greece, and elsewhere. The well-travelled practice is still popular today, though many regard it as a pseudoscience. James Herbert, head of the Psychology Department at Drexel University, explained bluntly to The Philly Voice, “There is scientifically no evidence whatsoever to support the claims about palmistry.” Proponents of palm reading, or chiromancy, as it’s sometimes called, of course disagree with Herbert’s assessment. Indeed, a lot of Americans believe in spiritual practices that scientists may view with skepticism. According to a 2009 poll by the Pew Research Center, 26 percent of Americans believe that “spiritual energy” can be located in objects, 25 percent believe in astrology, and 15 percent have consulted a fortuneteller or psychic.

A recent article in The Atlantic supports the idea that there is some connection between the hands and one's future. Studies have shown, for example, that a man whose ring finger is longer than his index finger is likely to be more attractive and athletic, be more well endowed, and father more children than a man with a shorter ring finger. (Yes, I’ll wait while you go look at all the men’s hands around you). This and similar research show that certain features of hands may correlate with other aspects of health, but they don’t prove the validity of palmistry, which tends to focus on one’s emotional state, character, and spiritual journey.

The following guide is gleaned from a variety of sources; although these sources generally agree on what major lines of the palm mean, there are differences in interpretation, due to different palm readers’ backgrounds and personal beliefs. Nevertheless, this “how to” will introduce you to the basics and make you everyone’s favorite party guest. (Well, if you give them good news, that is. Telling all your friends that they are destined to end up alone because “their palms told you so” will swiftly assure that you never get invited anywhere ever again).

Here they are, the palm-reading basics:

2. If you’re struggling to see the lines on the palm, place the hand under a bright light or use a magnifying glass.

The image above outlines seven of the most prominent lines of the hand. The first three are the most famous:

Contrary to popular belief, the life line does not show how long someone is going to live. Instead, it tells you about your subject’s quality of life. A long, deep life line is a sign that things are good: you have health and energy. Kay Packard, founder of the American Academy of Hand Analysis, claims in an article for Real Simple that a long life line also indicates that “You’re a rock whom people count on to stay strong in difficult times.” Tash and Silverman suggest that a short, deep line means the subject has the ability to “overcome physical problems.” A faint life line suggests a lack of energy and adventure, while a complete absence of a life line suggests that the subject is struggling with anxiety.

Breaks in the life line are indicative of past traumas or major losses. Professional palm reader Raven Maples told Nylon that a moderate amount of breaks could be a sign of someone “burning the candle at both ends.” In this case, “it’s a good idea to actively seek better rest at night and pay more attention to your self care.”

Tash and Silverman write that the head line, which stretches across the palm diagonally, indicates a subject’s “psychological makeup, intellectual development, and intuitive abilities.” Packard explains that a long head line that stretches across the palm can be an indicator that one thinks too much about things, overanalyzing problems again and again, while a short head line (stopping at the center of the palm) suggests that one is a quick thinker who doesn’t hesitate. Maples warns that a short head line can indicate that one moves too quickly, making decisions without fully sorting out their implications. Tash and Silverman suggest that a curved headline is a sign that someone is “romantic,” “creative,” “idealistic,” and tending to trust in intuition. A broken head line, in contrast, suggests one is suffering from “nervousness and mental exhaustion.”

Crossing above the head line, the heart line gives insight into a subject’s emotions. According to Packard, a long, straight heart line indicates that someone is a rational and considerate person; a long heart line that arcs upward, in contrast, suggests that a person is openly and unapologetically driven by his or her “passions and desires.” Tash and Silverman write that a short, straight heart line suggests that someone isn’t particularly driven by thoughts of romance, and that a short line running parallel to the head line is a marker of emotional stability. Maples tells Nylon that a curve, or lack of curve, in the heart line makes all the difference, saying,

The curvy line people are those that outwardly express their emotions easily, and are willing to initiate those heart to heart discussions. The folks with a straight line are more comfortable working things out in their own mind on their own time.

The following lines are known as “minor” or “secondary” lines. (Refer to the image above to see where they are). Not everyone has them:

4. The Girdle of Venus

Tash and Silverman write that this short line above the heart line can “indicate a wound-up and nervous person,” who tends to experience “extreme highs and extreme lows.” U.K. palm reader Jim Winter explains in a video that, despite sometimes getting a bad rap, the girdle of Venus “enhance[es] the subject’s emotional and sensual receptivity to his or her environment.”

5. The Apollo Line, or Sun Line

This line, which runs vertically down the side of the palm, is an indicator of success, a sign that someone is “creative,” “self confident,” and “extremely capable of following through on a plan of action,” according to Tash and Silverman. They emphasize that lacking this line does not reflect one’s success or lack thereof (so if you don’t have one, don’t worry.)

6. The Mercury Line, or Health Line

The Mercury line often starts at the center of the base of the palm and works its way outward and upward toward the pinkie. It is tied to health. Winter explains that “its very presence can show someone with refined communication skills, and someone who is more conscious of their health.” Tash and Silverman warn that if the line is broken, “it can be an indication of possible illness or those illnesses that have come and gone.”

Tash and Silverman explain that the fate line “is tied to one’s life path,” an “indication of obstacles that may be faced, educational and occupational choices, accomplishments and how content an individual is with his life.” Lori Reid, author of The Art of Hand Reading , explains in Nylon that the fate line also “tells us about duty and responsibility. Here we can trace major events that happen through the individual’s working life."

More like this
These Are The 3 Most Mellow Zodiac Signs
By Kristine Fellizar
Emily Ratajkowski & Pete Davidson's Astrological Compatibility, Revealed
By Nina Kahn
Here’s Your Daily Horoscope for December 7, 2022
By Mecca Woods
These 4 Zodiac Signs Will Breeze Through December's Full Cold Moon
By Brittany Beringer
Get Even More From Bustle — Sign Up For The Newsletter