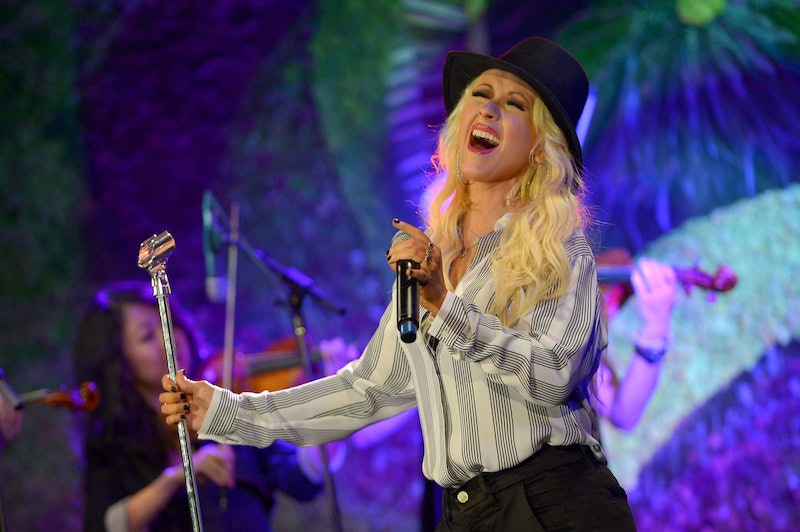 I am good at a few things, but singing is not one of those things. I am not being modest when I say I am a terriblesinger. But do you know what I am good at? Dreaming up totally unrealistic scenarios. Here's one of the scenarios I like to envision: my voice magically blossoms, I can suddenly carry all of the tunes, and I end up on The Voice. In this daydream, all four chairs turn during my Blind Audition. I look at Carson Daly, I look at all of the coaches, and then I utter those two words I never thought I'd get the chance to utter: Team Christina. After all, the woman who became a household name thanks to the high E above middle C is only one of the best vocalists of this generation. (“It'd be intimidating to sing in front of her” is a gross understatement. A disgusting understatement. I’m nauseated by that understatement.) Fun daydream, huh? Well, it looks like the dream of joining the diva's team could sort of be made into a reality: Christina Aguilera is going to teach an online singing course. According to Billboard, the “Ain't No Other Man” chanteuse will lead her very own MasterClass, and anyone—yes, anyone—can put their name on the wait list. No, it's not the same as being a contestant on The Voice, but that's OK by me. I'd pick singing in the privacy of my own home over in front of millions of people any day of the week.

According to a press release (via Billboard), the course includes "video lessons, interactive exercises, learning materials, and workbooks.” Now, just how interactive are we talking? How hands-on will Aguilera be? Will she be giving notes? Will she be the one grading the students' progress? Will she actually hear the students sing? Or will this be more along the lines of that online music history course I took in college (aka the class where the professor sent us prerecorded lectures the first day of class and ghosted for the rest of the semester)?

No matter what the case may be, it's still a class taught by Christina Effin' Aguilera. If I were to take this class, I'd want to be as prepared as possible. Here's how I'd prep:

Load Up On Hot Tea And Honey

My vocal cords can use all the help they can get.

I assume the lectures are pre-recorded, but it's still Xtina. And it'd be likeshe was talking directly to me, and that's enough to leave me starstruck.

Yeah, it's an online course, and no, no one would see what I wear. But that doesn't matter. There's something about a pair of "Genie In A Bottle" cargo pants that'd make me feel powerful/less insecure about my garbage voice.

Watch This Video On Repeat

Why? Uh, because it's incredible. That's why.

More like this
Katy Perry Regrets Not Working With Billie Eilish On “Ocean Eyes”
By Alyssa Lapid
Twitter Wants To Dance With Anne Hathaway At Paris Fashion Week
By Alyssa Lapid
Watch Kelly Clarkson Sing A Taylor Swift Breakup Song About A Toxic Relationship
By Alyssa Lapid
Gigi Hadid Gave Up One Surprising Thing After Having A Baby With Zayn Malik
By Alyssa Lapid
Get Even More From Bustle — Sign Up For The Newsletter
From hair trends to relationship advice, our daily newsletter has everything you need to sound like a person who’s on TikTok, even if you aren’t.