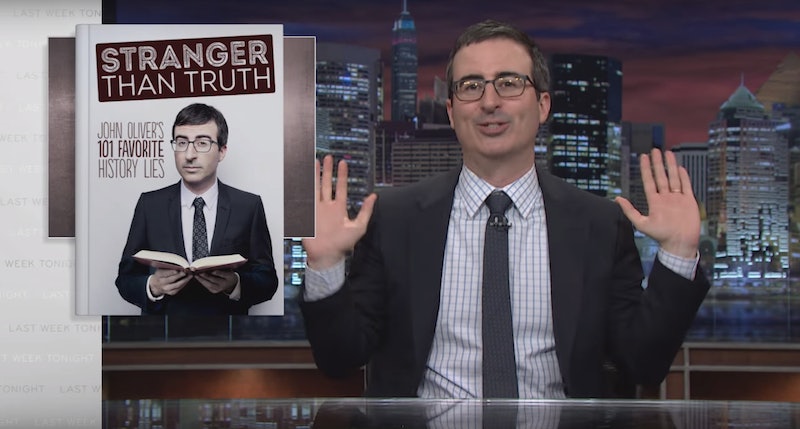 Without John Oliver telling us the news on Last Week Tonight (or was it Yesterday Right Now?), how else will we know what's going on in the world? The HBO show is on hiatus until Sept. 13, but thankfully Oliver hasn't forgotten us. Posted Sunday, a web exclusive clip shows Oliver touting an upcoming book full of historical lies to fans, only to pull the rug and declare it's a fake. But seriously, is Oliver's book Stranger Than Truth real?

The full title of the mysterious tome is Stranger Than Truth: John Oliver's 101 Favorite History Lies​ and is supposed to be filled with a bunch of fake history lessons because "the only thing that feels better than lying to someone is lying to someone, then regaining their trust, and then lying to them again." In fact, lying feels better than cocaine — which Oliver admits is a lie.

So, what other kind of lies are we talking about? Abraham Lincoln pardoned a drunk man for trying to have sex with an animal, and that man's name is John Wilkes Booth. Paul Revere sneezed and vomited the entire time during that famed midnight ride. Irish step dancing was invented by farmers trying to kill field mice by "rhythmically clobbering them to death" with their feet. Saddam Hussein received a key to the city of Detroit. (Wait, one of these is actually real.)

In the end, Oliver admits he wasted everyone's time because the book is fake and isn't coming out in April 2016 as he promised. That is, unless he's lying about that, too. Because the publishing house he claims is releasing the book, Simon & Schuster, is actually a real deal company, and it did publish titles by Dr. Oz, one of Oliver's favorite targets. That hardcover photo also looks super legit to me. Here's hoping!

More like this
The 'Firefly Lane' Book Ending Teases Way More Tears To Come In 2023
By K.W. Colyard
'Bridgerton' S3 Teases Exciting Social Season For Penelope Featherington
By Bustle
Lib & Will’s Romance In 'The Wonder' Is Very Different From The Book
By Sam Ramsden
'Waterloo Road' Is Back, With More Than A Few Familiar Faces
By Sam Ramsden and Vivian Iroanya
Get Even More From Bustle — Sign Up For The Newsletter