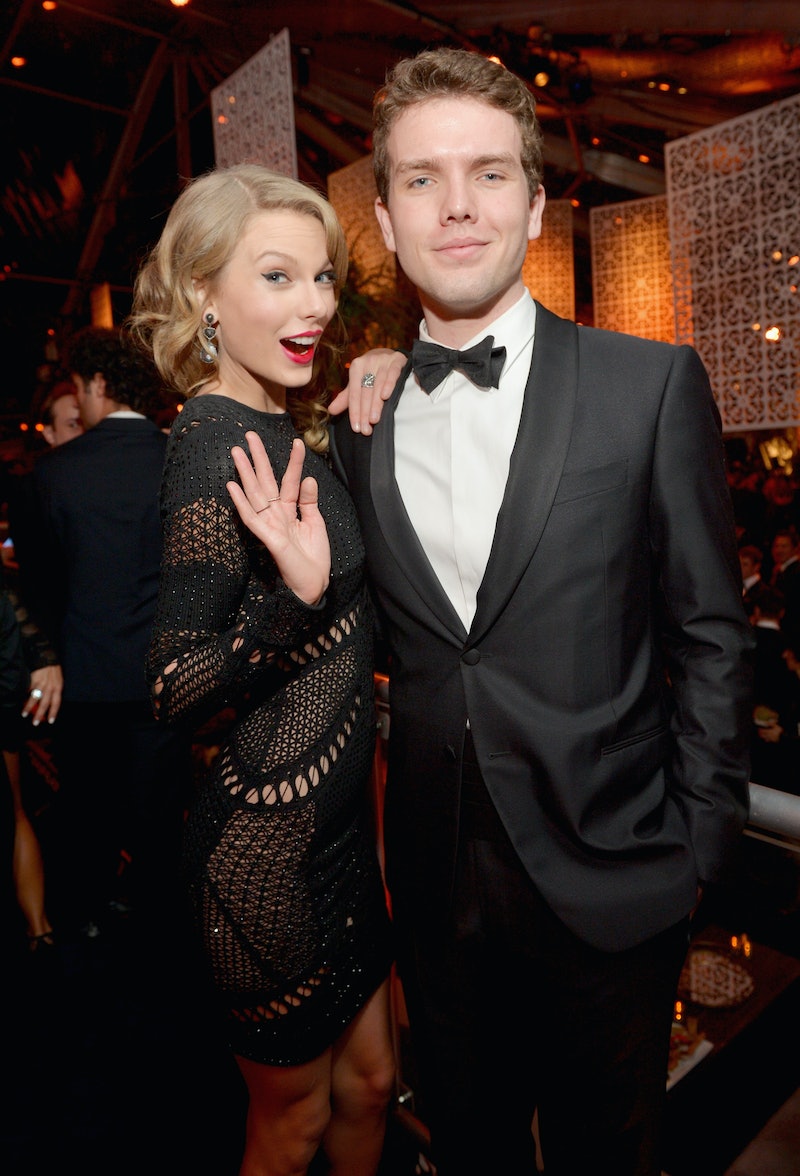 Being that Taylor Swift is currently the Queen of NYC Tourism, it's easy to forget she hasn't spent her entire life there. But before she made it to Nashville, she lived somewhere else: A farm. OK, so maybe not like the kind of farm that word conjures up for most of us, with cows and chickens and Old MacDonald and stuff, but a Pennsylvania Christmas tree farm is pretty close. Swift has always been pretty open about her upbringing, which sounds pretty magical, and during the 2015 VMAs last weekend, she and her brother took the opportunity to think back on how crazy it is that their farm beginnings brought them to such an epic award show. And this led to Swift posting an adorable throwback photo from her childhood on the farm, and in case you didn't already know, she and Austin were the cutest little kids ever.

It all started when Lorde took to Twitter to share a ridiculously adorable moment that was shared between Taylor and Austin at a VMAs after party. Apparently, Austin realized that his sister is not only BFFs with every Victoria's Secret Angel but also has practically become one by assimilation, and he just couldn't get over it. Not that I can blame him, of course. I'd feel the same way!

And it seems that this moment inspired Swift to share this photo of her and her brother together on the farm as blonde, curly-headed kids riding a tractor with their dad who had no idea that, one day, they'd party with people like Beyonce and Justin Timberlake.

In case this whole Christmas tree farm thing is news to you, let me be the one to fill you in. Swift has actually talked extensively about her childhood, and it makes me bummed that I grew up in the suburbs, playing with my Barbies instead of being infected with the spirit of Christmas and Santa Claus 24/7.

It Was Actually Magical

It was an actual Christmas tree farm. We had, like, 15 acres. It was really fun as a kid. I also spent my summers at the Jersey Shore, on the bay in Stone Harbor. I walked everywhere barefoot. It was just the most amazing, magical way to grow up.

It Sparked Her Love Of Christmas

Plus, Her House Itself Was Actually Gorgeous

Can I live here? Seriously.

More like this
Michelle Obama & Taylor Swift React To The Supreme Court Overturning Roe v. Wade
By K.W. Colyard
Sadie Sink Would Escape Vecna From 'Stranger Things' With This Taylor Swift Song
By Grace Wehniainen
Tanya Burr Is Expecting A Baby With Her Mystery Partner
By Maxine Harrison
EJ Marcus Runs The Most Wholesome Corner Of TikTok
By Alexis Morillo
Get Even More From Bustle — Sign Up For The Newsletter