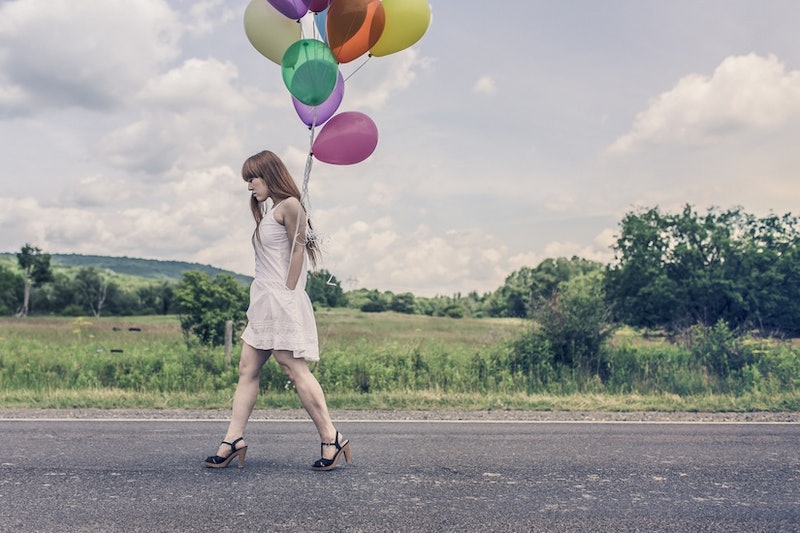 Introversion is an often misunderstood situation; we're not people-haters, and we can like parties and big events as much as anybody else. It's a matter of energy. Extroverts gain energy from social situations, while introverts expend it — so on the fourth hour of a party, extroverts are buzzing around like lightbulbs cranking watts, while introverts are fading and flickering out. Managing big social events like parties as an introvert becomes a slightly tricky endeavor with that in mind. How can you do your duty to the host and have fun, without seriously depleting your social stores and leaving yourself hobbled for ages?

One solution is to find an extrovert partner in crime (I'm an introvert married to an extrovert of old). But that situation isn't perfect; the extrovert can never quite understand the realities of an introvert's energy lag, and can only "boost" them so far before somebody gets left behind. Plus, it's a matter of independence. It's important for introverts to be able to hold themselves in social situations on their own, without reliance on others — though, as we'll see, an understanding friend or two might do wonders.

I know you don't want to leave your nice bedroom and exhaust yourself by talking to people, but if you hack the experience a little, you'll be, if not a party animal, then at least a relatively socially fulfilled animal who doesn't need to hibernate for six months after the glitter's swept up. (Not that there's anything wrong with that though, let's be honest.)

Your own particular brand of introversion dictates whether you lose more energy in a group situation (less pressure on you, more people to talk to) or one-on-one (fewer people, more intensity). But practice has shown me that a reliance on one-on-one conversation is more lasting for an introvert party situation. If you're with a friend, don't monopolize them all night, though; let them lead you around, or join in bigger situations together. Introverts united are a force to be reckoned with (very quietly).

I love hosting parties, but the last one I threw had 60 people and I tired out very quickly. The solution? Scheduled breaks. Every so often I'd just go upstairs to sit quietly in the dark for a little while, recharge my batteries, and reemerge exuding social energy like a lightbulb. Even if it's not your own house, finding space to breathe is a good plan to help you last the distance.

3. Find The Pets Or Small Kids

Friendly party members who don't talk back and like snuggles? Introvert's best friend. Take over baby duty, offer to mind the cat, spend time calming down the dog after a firework has upset it; you'll be seen as a saint and get time to yourself, possibly cuddling a cute thing. Plus, pets and animals in general are an amazing icebreaker.

One time when it's totally acceptable to stand in silence is when you're judging somebody's life choices. Look with great interest at what interests you in the party venue. If you're lucky, it's somebody's house, and you can look at their vinyl, paperbacks, and old prints. (If they have good taste.) If you're unlucky, you're at a club, and I can't help you.

Tip: if you feel the need to circulate but know absolutely nobody, or no one is offering to let you into the conversation, don't try to infiltrate groups of tight-knit chums. Look for the people who are drifting themselves, and having a quiet introductory conversation. You can bond over how few people you know.

I know the temptation to hide in the bathroom may be immense, but please don't do it. People will get annoyed at you rather than respecting your need for space. If you do really require a bit of breathing time, scout out a location — out in a garden, or on the edge of a big group — where you won't be in anybody's way and can regroup. And don't go anywhere that's off limits.

7. Be Helpful To The Host Or Cook

A great way to get out of talking to anybody is, as we'll all have learned from third grade parties, offering to help the host. But we're grown-ups now, and chances are you know the host or whoever's trying to hold the party together — and that they'll appreciate your offer to chop cucumber, run out for ice, or stir the sauce. No more party pooper, just star party guest.

8. Board Games Are Good, Watching Is Better

The good thing about a board game situation developing in one room at a party is that it can become a spectator sport — an introvert's dream. Sitting quietly watching people make fools of themselves is brilliant, because you don't have to do anything and they're having too much fun to notice you — and it's probably good fun to watch, too. You can join in a round once you're feeling recharged.

9. Entering An Argument Is Easier Than Crashing A Conversation (Mostly)

Gone out for a recharge break and come back to discover all the conversations have moved on? An argument can actually take less social energy than a struggling polite conversation, because the lines are already established; all you have to do is take a side. Look for the people getting into it over Wes Anderson or which Star Trek captain was best. Political arguments can get draining, though, so steer clear.

10. Always Have An Exit Plan

An exit plan is an introvert's kindest gift to herself. Chances are that you'll tire out early, but even if you manage to last a considerable time by restricting yourself to one-on-one conversations and spending a long period with the dog, you'll need a way to get out. Don't pin it on anybody else — they may want to stay and enjoy the vibes. Have timetables, bus money, and cab fare sorted so you can jet when you like. And do say goodbye when you leave; don't ghost, no matter how much you're missing your pajamas.

More like this
You Can Stay At The 'Hocus Pocus' House On Airbnb
By Alexis Morillo
Craving The Beach? Here's Your Guide To A Solo Vacation In Turks & Caicos
By Alexis Morillo
3 Zodiac Signs Most Likely To Be The Center Of Attention
By Nina Kahn
10 Ways To Be More Empathetic To Your Partner
By Raven Ishak and Lexi Inks
Get Even More From Bustle — Sign Up For The Newsletter