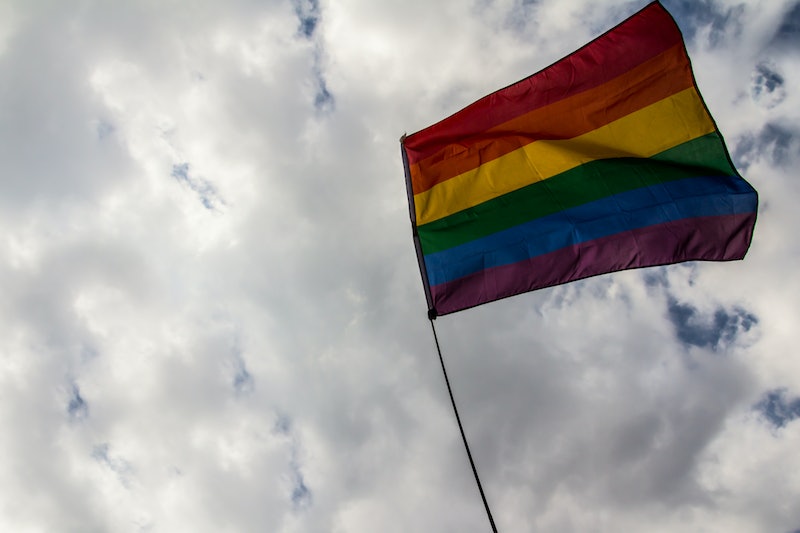 Puberty is a dark time for all of us, but at least many of us had those painfully earnest sex education videos to distract us from our rebelliously hormonal bodies every now and again. For trans individuals, however, it's a different story. Although hormone replacement therapy (HRT) frequently results in a "second puberty," there are few informational guides on the subject — until now. Second Puberty, the awkward, old-school guide to transitioning, is currently Kickstarting, with the goal being to provide both some much-needed information and a little levity.

Shooting in the style of those awkward sex ed videos that provided entertainment for middle schoolers for weeks after being shown, Second Puberty intends to provide education for trans and non-binary individuals who are considering or have just begun HRT. As much attention and visibility as the trans community has been receiving of late, the actual implications of hormone therapy are rarely discussed. Part of this, of course, is because trans individuals are obviously under no obligation to discuss the details of their bodies with the public, no matter how much talk show hosts badger them about it. Additionally, HRT can be incredibly expensive, and many individuals simply can't afford (or don't want) to go through the process.

On the flip side, according to Second Puberty writer Ashley Lauren Rogers, the majority of available information regarding HRT is couched in medical terminology that many find difficult to interpret. This, then, is Second Puberty's goal: To act as an informative starting point for those considering HRT, as well as for friends and allies. "It can be a lot to wade through and I know I learn more information from a joke... way better than a multi-page pamphlet of information," she tells Bustle over email. "If we can compile some of that dense information into a quick and fun intro guide for people considering HRT, it will at least give them an idea of what they might expect physically, emotionally, and mentally, and can also help their family, friends, and allies in the process as well."

Websites devoted to the effects of HRT on an individual basis do exist, but they are far and few between. Second Puberty, however, intends to be " entertaining and easy to understand — breaking down the experience of HRT in a way that'll make sense for everyone," according to its Kickstarter page.

It's clear that an old-fashioned puberty video might be useful for many in the trans community, but why did the creators of Second Puberty take the "old-fashioned" part literally? According to producer and writer Lux Alptraum, it's all down to comedy.

"My main motivation for doing the show is the simple fact that sex ed videos... are just straight-up funny," she tells Bustle over email. She continues, "But beyond that, I appreciate the fact that starting from a place of comedy makes it easier for people to talk about sex, period." After all, the sex ed videos of our youths may have been hilariously terrible, but isn't that exactly why we remember them?

"Humor is a really fantastic entry point for conversations that can be fraught, uncomfortable, or difficult – it’s a lot easier to get a conversation going, and help people get educated, if we’re making them laugh along the way," Alptraum adds.

Second Puberty also makes a point of using trans individuals in the cast and crew. "We want to include as many trans people as possible in the crew; I strongly encourage NYC-based film professionals to reach out if they’re interested in getting involved in the project," Alptraum writes.

This is hugely important considering the discrimination faced by many trans individuals in the workplace — and yes, this includes industries that many would expect to be LGBT-friendly. Rogers herself has experienced profiling firsthand.

"I'm 6'4", have the shoulders of a linebacker, and refuse to feminize my voice so there's not a lot of digging a person has to do to find out my status as a trans woman," she writes. "More often than not I've been under-employed." However, once hired, she says she has "never been met with anything short of absolute support."

Second Puberty is largely intended for a trans audience, but the creators note on their Kickstarter page that it will be useful for family and friends looking to support trans individuals as well.

Watch the campaign video below, and to donate, head over to the Second Puberty Kickstarter page.