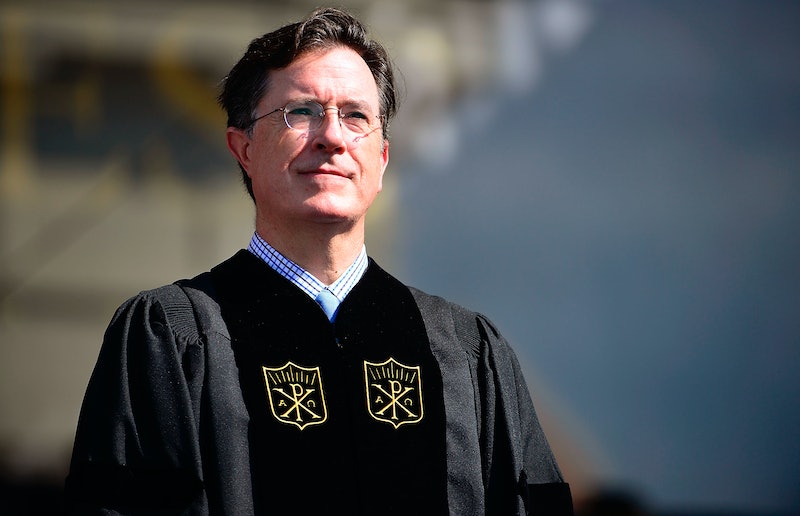 Stephen Colbert is geeking out. After putting out a list of his exciting first week guests for The Late Show With Stephen Colbert — many of whom are first timers — CBS released the lineup for Colbert's second week in the late night chair, and they're nerdier than ever. Which is fantastic, because Colbert is at his best when he's at his smartest. On the list of the second-weekers: presidential candidate Bernie Sanders (who I assume Colbert looks up to with heart-eyes), UN Secretary General Ban Ki-moon, and Supreme Court Justice Stephen Breyer. There are also some superstar celebs, and a good handful of musical guests, including a surprising but exciting collaboration between Run The Jewels and TV On The Radio. It's shaping up to be a very uniquely Colbert Late Show, and we're still a week away from his Sept. 8 premiere.

I considered ranking the guests on a scale of least to most nerdy, but what does "nerd" even mean anymore? So here's a ranking of the guests based on how excited I am to see them, but, even the last on the list, I'm still jazzed for. (Musical guests have been excluded, purely based on panel content alone — although Colbert has some great performances slated for his second week on The Late Show.)

I actually really like Naomi Watts in movies, but, as a person, I've yet to truly connect with her. Maybe Colbert will charm her like he does most movie stars.

I do love the House Of Cards star, but I'm growing bitter the longer I have to wait for the next season of the show. Maybe Colbert will ask Spacey to give us some spoilers to tide us over.

I love a good movie star interview, and Emily Blunt is one of my favorites.

Jakey G is on the cusp of being an even bigger movie star than he already is, with Southpaw and Demolition gaining tons of attention this year. But what I really hope Colbert grills him about is that beard.

I hope Colbert and Nyong'o get into more inspirational stories about beating the odds; they both have plenty of them. Also interesting: Nyong'o will be appearing the same night as Senator Bernie Sanders — will she participate in their political discussion? And how much will super-geek Colbert be able to drag out of her about the upcoming Star Wars reboot?

One of the nerdier and more exciting names on the list: the Supreme Court has had an historic summer, and I've missed Stephen Colbert's political take through the guise of his character. But Colbert recently took down Breyer's colleague, and Colbert's own sworn enemy, Antonin Scalia in a scathing repudiation of his dissent on gay marriage. I want them to slyly agree that Ruth Bader Ginsberg is a goddess.

Stephen Colbert sitting down and talking to the Secretary General Of The United Nations?! That is nerd central. I don't even know if I will understand most of what Colbert and Ban Ki-moon talk about.

Oh man: Carol Burnett, Abbi, and Ilana are probably three of the funniest female comedians... on earth. Throw Colbert into the mix, and I don't know what will happen. I do have to just issue a preliminary "Thank you" to CBS for making this happen.

The most interesting guest on the list: Vermont senator Bernie Sanders, who is currently real competition for Hilary Clinton in the polls. I wanna know: are they going to talk about the Black Lives Matter movement? It's bound to be an intense, and hopefully revealing, interview, and it will surely be Colbert at his best. This time, though, we'll see a genuine Colbert, and it will be comforting to have his political views back on TV.

I still gotta say, though: I wish that Colbert had billed more women in his second week. His musical guests for week two are pretty impressive, but still scarce on women: he's got Willie Nelson, Run The Jewels and TV on the Radio, and the cast of the Broadway musical An American In Paris. Nonetheless, Colbert is taking the reins in full, and I'm excited that he's making The Late Show nerdier than ever.

More like this
Liz Truss Is Being Compared To A Controversial Emma Thompson Character
By Sophie McEvoy
Mel C Wants You To Know That Margaret Thatcher Wasn’t A Spice Girl
By Darshita Goyal
Who’s The Richest 'Grey’s Anatomy' Star? See The Net Worth Of Each Cast Member
By Hugh McIntyre
Dan Levy Appears In The Latest Teaser For The Weeknd's HBO Series, 'The Idol'
By Jake Viswanath
Get Even More From Bustle — Sign Up For The Newsletter