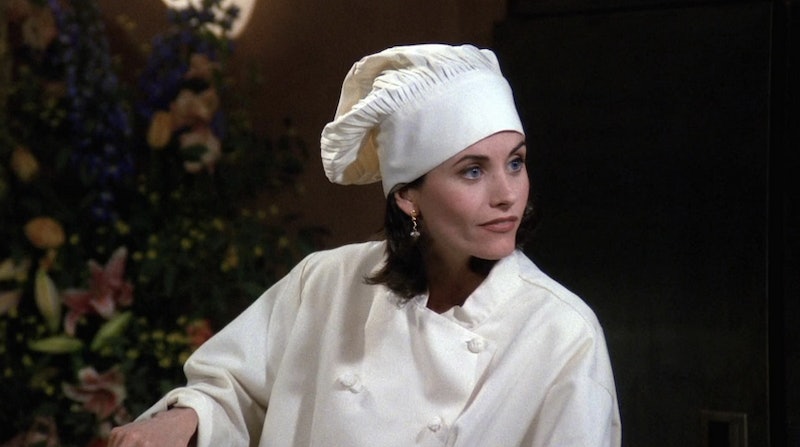 Not only was Friends' Monica Geller-Bing the glue that held the favorite TV group together, she was a chef extraordinaire. Throughout the NBC series’ ten season run, Monica cooks up a storm — while rocking “Yummy Yummy Yummy I Got Love In My Tummy.” And, over the course of Friends , there were some memorable recipes that I'm pretty sure we all wanted to try for ourselves.

After all, that woman knew how to cook. Monica was always the hostess and she had the big apartment and the culinary skills to back it up. Sometimes, her food was too sophisticated for the group, like her salmon mousse that Joey so lovingly called “whipped fish,” her desire to poach things for fancy parties, the multi-syllable foods for poker night, or her amuse-bouche that Chandler mockingly calls “amuse-ing.” But, there were plenty of other, less intimidating dishes that the gang gobbled up. From her gorgeous Thanksgiving spreads, to her party platters, to her well stocked fridge (mostly in anticipation of Joey showing up at any moment), Monica’s food always looked incredibly appetizing and was the basis for some of the show’s best plots.

Here are Monica’s nine most memorable recipes — from the Moist Maker to Mockolate — ranked in the order I most want to try them, from best to worst, of course.

“My sister makes these amazing turkey sandwiches. Her secret is, she puts an extra slice of gravy soaked bread in the middle. I call it the Moist Maker.” — Ross

Guys, this is THE sandwich, made from leftover Thanksgiving food, that’s good enough to cause a nervous breakdown. When Ross’s sandwich is stolen from the museum fridge, it’s the straw that breaks the camel’s back (Ross’s back) after a hard year... and yeah, another failed marriage.

Make your own "moist maker" leftover sandwich with this recipe via SpoonForkBacon.com.

After Monica’s failed jam plan, she moves onto the baby plan… she’s going to need bigger jars. But, before she abandons the jam, we see Joey eating jars and jars and jars of it. Joey loves it so much that he can’t even imagine choosing the girl from the copy place over it, though he does come up with a creative solution for that hypothetical would-you-rather situation.

Suffering from a recent Richard-esque heartbreak? This strawberry jam recipe from AllRecipes.com will the spot.

3. All The Different Kinds Of Thanksgiving Potatoes

When Monica hosts Thanksgiving for the first time, in “The One Where Underdog Gets Away,” she over extends herself by making different kinds of potatoes that are reminiscent of home for each friend. Phoebe’s has peas onions, Ross wants lumpy mashed potatoes, and Joey needs tots. But does anyone care what Monica wants? Nooooo!

We all know Chandler doesn’t eat Thanksgiving food. So, when Ross brings him home for Thanksgiving, Monica meets Chandler for the first time and makes him some mac and cheese. It’s so good, Chandler says she should be a chef. This visit certainly changes the trajectory of Monica’s life, in more ways than one!

When Monica caters a party for her hypercritical mother, she gets a lot of backlash from her mom when she loses a blue false fingernail in the quiche. Her mom then pulls back-up frozen lasagna out the freezer, saying she had it all along just in case her daughter pulled a Monica, i.e. screwed up. Monica and Phoebe then change the definition of Judy Geller’s cruel phrase and make a spread that puts the frozen lasagna to shame. They really end up pulling a Monica. But, you know, nail or no nail, someone needs to eat the ruined quiche. Somebody like Joey… or me.

Here's an easy lasagna recipe to have as backup, just in case you "Pull a Monica" in the kitchen.

OK, in “The One with the Two Parties,” not everyone is a fan of the birthday flan. Let’s be real, two parties should equal two cakes. But, I’m also sure anything Monica makes is delicious and the poor flan is getting a bad rap.

Here's a birthday flan recipe from Scrumptious Saturdays for the next time you simultaneously host two parties.

Monica and Phoebe put painstaking effort into using the last of Phoebe’s grandmother’s chocolate chip cookies (one that’s been in the freezer for at least two seasons) to figure out the lost recipe. In the end, they realize they put days of work into what turns out to be the Nestle Toll House cookie recipe. I mean, I know it’s just Nestle chocolate chip cookies, but I still want one.

You can find the classic Nestle recipe on the back of every bag of chocolate chips, or here.

Mockolate is a "completely synthetic chocolate substitute” that Monica is tasked with making edible via Thanksgiving recipes. After using the gang as guinea pigs in her Mockolate experiments, she finds out that the food substitute wasn’t approved. Hey, she needed the cash and, after all, some Mockolate is fine.

When Joey needs to be, well, uncut for a role — and he is not IRL — Monica does what any good friend, and chef, would do. She makes him a falsie. I could be crass here. I mean, there are just so many jokes about wanting to try Joey’s… uh... meat. But, honestly, this creation of Monica’s is solid in last place on my list. Not only do some of the concoctions include Silly Putty, but we also need to look out for toothpicks — yikes.

I don't have a recipe for this one ... But, knock yourself out. Whatever you do in the privacy of your own home is none of my business.