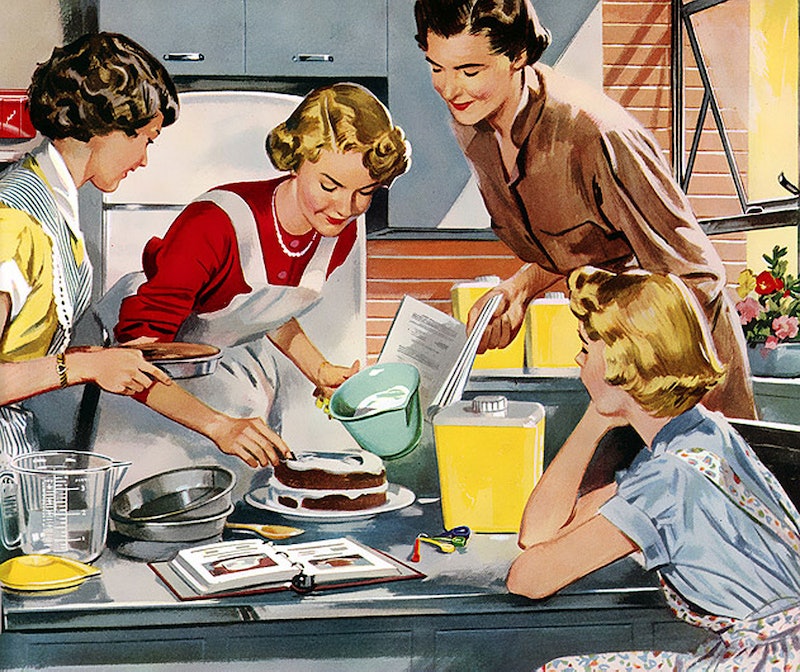 A book coaching women on how to be submissive wives has been on Amazon's bestseller list in Spain for weeks, much to the dismay of feminists. The book, by Italian author Costanza Miriano, is straight-up called Cásate y sé sumisa ("Get married and be submissive'). Miriano, a mother of four, has some priceless gems in her book. Her thesis is pretty easily summed up here:

If you only do what is right for you, what you think, then you are not married to a man, you are married to yourself. Instead of doing that, you should submit to him ... It’s true, you’re not yet an experienced cook or a perfect housewife. What’s the problem if he tells you so? Tell him that he is right, that it’s true, that you will learn. On seeing your sweetness and your humility, your effort to change, this will also change him.

Miriano says she was inspired by the Gospel of Saint Paul, which spells out women's duty to be meek: "Let the woman learn in silence with all subjection." Her book has attracted both support from traditional members of the Catholic Church, and the wrath of feminists and politicians. The wrath part isn't really surprising – you can count on a lot of people getting angry when they read that "we [women] like humiliation because it is for a greater good." (Yes, that's an actual line from the book.)

Politicians from both of Spain's main parties and left wing groups have criticized the book, arguing that it encourages violence against women. Spain’s Socialist Party has denounced Miriano's work as a promotion of “inequality, chauvinism, and discrimination,” while the ruling Partido Popular’s minister of equality is calling for the banning of the book. Censorship seems a little too extreme, especially given the country's past under Franco. Instead, Spain should be asking itself why this book ever became a bestseller.

Politicians from both of Spain's main parties as well as left wing groups have criticized the book, arguing that it encourages violence against women.

The book's success has led to protesting across the country. On November 25, International Day for the Elimination of Violence against Women, protesters gathered in the northern city of Bilbao and tore up dozens of copies of Miriano's work. Protesters also staged a fake "submissive wedding" outside the Archbishopric of Granada, the book's publisher. The Archbishop Francisco Javier Martinez himself called the backlash "ridiculous and hypocritical" in a society where abortion – which he sees as violence against women – is legal.

The Archbishop already has Miriano's next book lined up for publishing, called Cásate y da la vida por ella ("Get married and give your life for her'). Which is a good thing, because with all this submitting, we'll be needing someone else's life to fill the void once we stop "[doing] what is right for [us]." Welcome back to the 1950s.

More like this
Allie Rowbottom Will Have Her Feminism With A Side of Botox
By Samantha Leach
Steve Banerjee's Wife Irene Sold The Chippendales Brand Prior To Her Death
By Brad Witter
Robert Downey Jr.’s New Film Is A Tender Story of Fatherhood & Forgiveness
By El Hunt
Casey Anthony’s Father Said He Was “Ready To Forgive Her” Before She Renewed Allegations
By Brad Witter
Get Even More From Bustle — Sign Up For The Newsletter