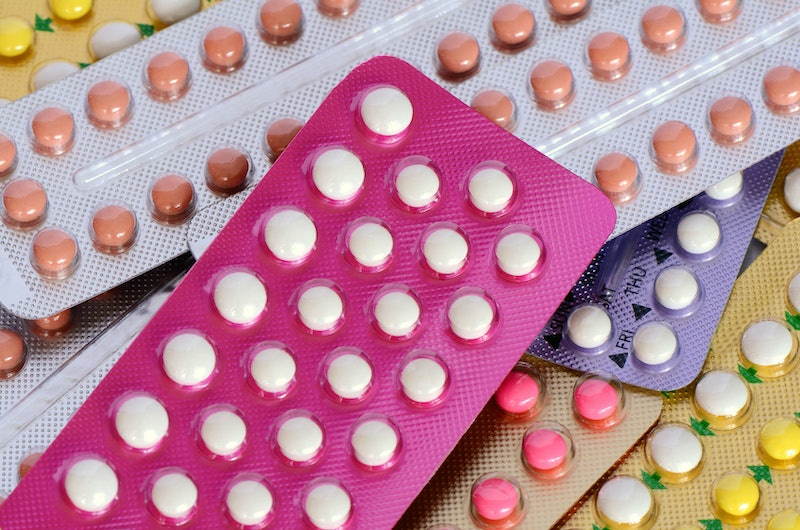 We know our history: men have long tried to control women's bodies. This has been clear since Roe v. Wade, and it was made even clearer with new abortion restrictions across the country this summer. But while the abortion debate has its points to argue — it is, after all, essentially a tension between the fetus' so-called right to life and the woman's right to her own body — reproductive coercion is another ballgame altogether. Not familiar with the term? That's probably a good sign. Reproductive coercion is essentially contraceptive sabotage, where one partner strips the other of the ability to control their own reproductive system. And while reproductive coercion does happen to men, for women, it's alarmingly common.

Barring physical assault and forced ingestion, reproductive coercion is virtually impossible to prosecute in the United States. The crux of the matter? The legal interpretation of consent. While in Canada the law allows for a distinction between consenting to a sexual act and consenting to a sexual act with the use of contraception, in the U.S., the law is much fuzzier.

These women dealt with an abhorrent range of pressure from their partners. Boyfriends and spouses did everything from hiding the women's birth control pills to poking holes in their condoms. Some used emotional tactics, threatening physical violence or abandonment if the women refused to get pregnant.

A piece in The Nation exposed the story of a woman whose partner would hide her birth control pills. Yet when she got pregnant and refused to get an abortion, her partner tried to physically beat her into getting one by kicking her in the stomach and pushing her down the stairs to induce a miscarriage.

"This study affirms findings of previous investigations that reproductive coercion is common among reproductive-aged women and is associated with a history of intimate partner violence," the researchers from Brown University said.

But as the Daily Beast recently pointed out, incredibly, reproductive coercion still isn't actually against the law:

The issue gained newfound attention last month, when the Supreme Court of Canada heard the case of a man who was sentenced to jail time for admitting that he poked holes in condoms to get his girlfriend pregnant in an effort to keep her from ending their relationship. She ultimately terminated the resulting pregnancy, and though a judge ordered the boyfriend’s acquittal, a second trial determined he was guilty of sexual assault. According to legal experts in the United States, however, he would not be guilty of any crime south of the border.

Barring physical assault and forced ingestion, reproductive coercion is virtually impossible to prosecute in the United States. The crux of the matter? The legal interpretation of consent. While in Canada the law allows for a distinction between consenting to a sexual act and consenting to a sexual act with the use of contraception, in the U.S., the law is much fuzzier. As the Daily Beast explains:

That case hinged largely on the definition of consent. The victim consented to sexual intercourse, but only intercourse that involved the use of effective contraception. So in sabotaging that birth control, the perpetrator engaged in a sexual act to which the victim did not consent, thus resulting in a lack of consent, deemed an assault. According to the law review analysis, “the prevalence of ‘generalized consent’ in American sexual assault law practically makes the question moot. Given this context, legislatures would be wise to create an independent criminal cause of action for birth control sabotage ... U.S. courts are less likely to get into the details of what transpired between two consenting adults once general consent to the sexual act has been established and proved. That is problematic, of course, as the choice to become a parent is a separate and independent choice from whether to engage in sex."

The Brown study encouraged ob-gyns to try and familiarize themselves with the markers of reproductive coercion, so as to identify it in their patients and act accordingly. "With improved understanding, [ob-gyns] will be better equipped to identify affected female patients and offer them options to help interrupt the cycle of birth control sabotage, male power over pregnancy decision making, and unwanted pregnancies," the researchers concluded. But is this really enough?

Bearing in mind the recent anti-abortion legislation sweeping across the country, the fact that it's not illegal to force or trick a woman into getting pregnant seems downright absurd. Not only will men who poke holes in their condoms in order to impregnate their partner see no ramifications, but if the woman lives in a state where abortion rights are restricted, she could be stuck with a baby forever. To say that's nightmarish is no exaggeration.

“This most recent case of a Canadian man charged with sexual assault is not the first time a woman has been manipulated by a partner through tampering with her method of birth control," said Rep. Carolyn Maloney (D-NY). "Such cases are often linked to domestic violence and unwanted pregnancy. We must do more to protect women from partner violence and ensure our court system prosecutes those who commit such acts.” Damn straight.