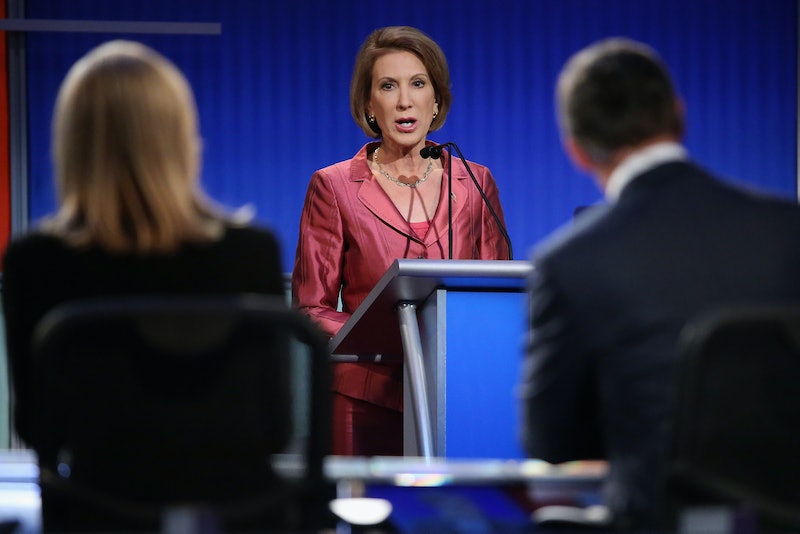 The second Republican debate of the 2016 election is fast approaching. The event will be held on Sept. 16 at the Ronald Reagan Presidential Library in Simi Valley, California. In addition to being held in a different location from August's highly popular first GOP debate in Cleveland, this second debate will be presented by CNN rather than Fox News. The network released an updated set of guidelines on Tuesday that includes one major change. Thanks to an added stipulation, any candidates ranking in the top 10 in designated national polls between Aug. 6 and Sept. 10 will be added to the roster. This means that Carly Fiorina will join the next GOP debate, and she might do so as the 11th candidate onstage.

When debate guidelines were initially released on May 20, CNN stated it would only look at polling numbers from three weeks before the first GOP debate as well as five weeks after (originally July 16 and Sept. 10). Despite initially indicating they'd be unable to change their criteria, the network has instead expanded their range. CNN's rationale boils down to a lack of national polls available within their initial guideline's time frame. The network issued a statement on Tuesday expressing surprise at the addition of just three new national polls rather than the mass amounts of polling that was seen before the first GOP debate:

At the time, we expected there to be many more national polls following the first Republican debate, in August, than there appears there will be. ... We learned this week that there will likely be only two more polls by the deadline of September 10th. In a world where we expected there to be at least 15 national polls, based on historic precedent, it appears there will be only five. As a result, we now believe we should adjust the criteria to ensure the next debate best reflects the most current state of the national race.

The RNC has readily given its blessing to CNN for changing its debate criteria. Likewise, so has Fiorina. The former HP CEO has lobbied to be included in the latest upcoming debate since last week, likening CNN's initial guidelines and Fox News' similar rules to the reason voters distrust the media so much. In a recent interview on MSNBC's Morning Joe Fiorina had this to say about current numbers from state polls:

They all say the same thing: I'm in the top five. And so I didn't think the Fox News rules were particularly good using national polls. I don't think the CNN rules are particularly good, especially since they go all the way back to mid-July. I think it's why people are losing trust in the media, frankly, and are upset in many cases with the RNC.

Fiorina's polling numbers have risen substantially following her commanding performance at the GOP pre-debate forum in Cleveland on Aug. 6 and have only continued to improve. Recent numbers from HuffPost Pollster put Fiorina in fourth place overall with 6.2 percent popularity. Just one week before the first GOP debate, she was polling at less than 2 percent. According to an analysis of current numbers from CNN, in addition to Fiorina, the 10 other candidates who will be featured in the second GOP debate are Jeb Bush, Ben Carson, Chris Christie, Ted Cruz, Mike Huckabee, John Kasich, Rand Paul, Marco Rubio, Donald Trump, and Scott Walker.