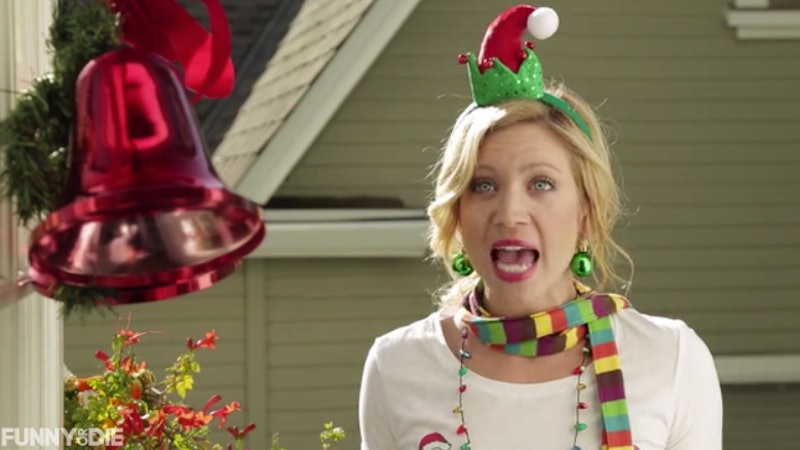 If you thought the a cappella warriors in Pitch Perfect were intense, think again: Funny Or Die videos always seem determined to one-up the type of thing. Sometimes even with the same cast! Which is why Brittany Snow's Christmas caroler in this sketch is all kinds of Tracy Flick demented — and it's great.

The sketch follows over-intense carolers Gretchen and Marnie (Snow) as their rivalry comes to a head. People don't seem to like their caroling all that much, which I disagree with because if someone showed up on my doorstep singing "Baby It's Cold Outside," playing both parts themselves, and highlighting the songs consent issues? I'd be all over that.

The tone of the sketch as a whole is actually pretty reminiscent of aspects of Pitch Perfect: The strident competition, Snow's line about her gay cousin, etc. There's still no detailed news on that 2015 Pitch Perfect sequel the world is eagerly anticipating, although producer Elizabeth Banks said in a recent interview with Slash Film that the script's coming along nicely:

We’re working very hard on the script but I don’t anticipate we’ll shoot it until maybe first or second quarter of next year ...

All we know is that Brittany Snow should get far more opportunities to flex her obviously impressive comedy chops.

More like this
Christina Perri Reacts To Her 'Twilight' Song Being One Of YouTube's Most-Viewed Ever
By Radhika Menon
Taylor Swift Calls Dwayne Johnson "The Man" After Revealing New "Taylor's Version" Song
By Jake Viswanath
Yes, You Do Know The Song From The 'Black Panther: Wakanda Forever' Trailer
By El Hunt
Beyoncé Is The First Woman To Have A No. 1 Album Since Adele Did Almost A Year Ago
By Radhika Menon
Get Even More From Bustle — Sign Up For The Newsletter