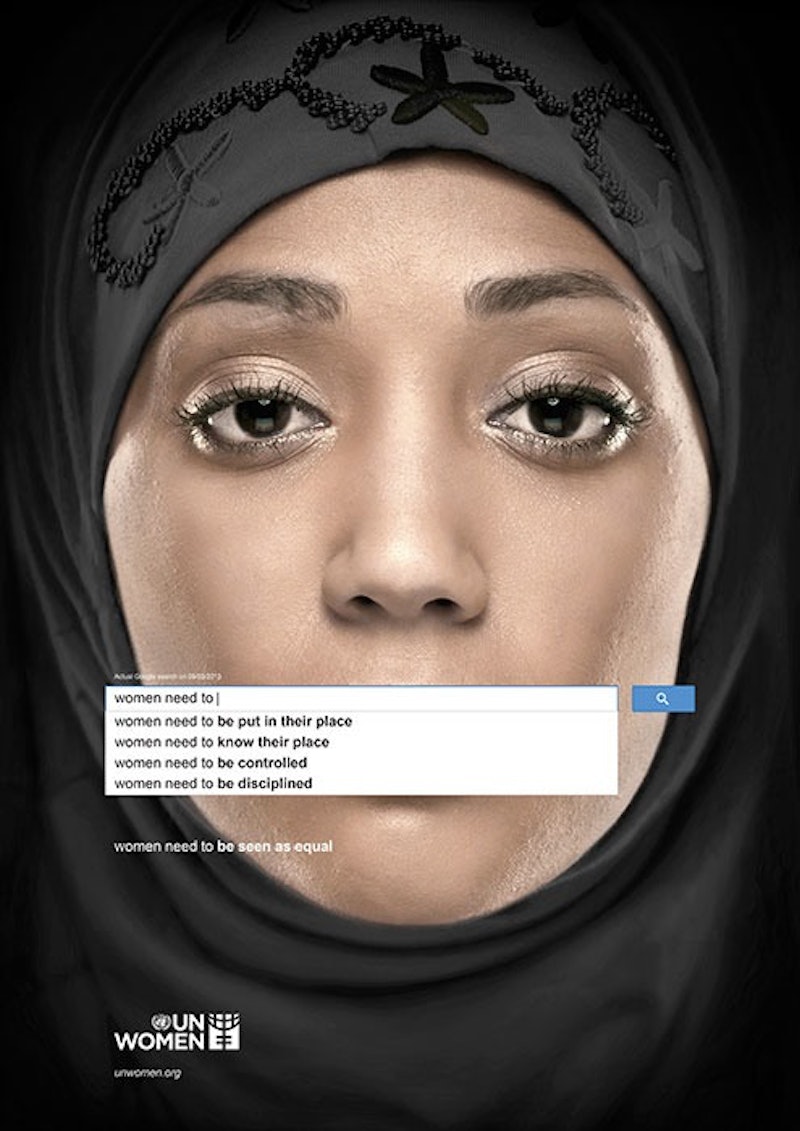 Feminism has become, slightly weirdly, a buzzword in marketing. Thank Beyonce, or just a new generation of social-media-savvy feminists with copious money to spend, but it's now the hot new thing to incorporate feminist messages into media and advertising. Make no mistake: Feminism is being utilized to sell products. Is this a good thing or a tragedy?

Feminism is an intensely complex thing — intersectionality, privilege, and politics all add extra texture to the fundamental quest for equal rights — and seeing it reduced to a buy-me-now technique often feels manipulative and simplifying. But it's also pretty cool to see that feminism is now such a necessary part of consumer belief systems that companies need to appeal to it. More and more, if it's sexist, then it's not getting bought, while if it proves its feminist credentials, it sells.

We're pretty savvy nowadays. If feminism seems too plastered on, rather than an organic part of the product, we tend to get wise immediately. Moreso than other kinds of ads, feminist advertising has to be sincere to really resonate.

We've come a long way baby — especially considering that, historically, advertising has not treated women very well. But over the years, there have been some truly awesome feminist ad campaigns that managed to strike the right chord in their time. Here are nine of the most memorable.

This was one of the more interesting manifestations of the current Girl Power advertising craze, and is also shaping up to be one of the most virally shared. "Throw Like A Girl" has a simple concept — ask girls and women what they think "throw/run like a girl" looks like, and film the results. It may not have very much to do with sanitary products, but it's a devastating message about the societal whittling of our self-confidence.

This wasn't actually a widely seen recruitment campaign at all, but rather an internal motivational poster made to encourage women working for Westinghouse during World War II. It wasn't really influential until several decades later, when it was rediscovered. The "We Can Do It!" image, also known as Rosie the Riveter, has since gone on to be one of the most widely used feminist icons in the world. But in 1943, it was simply meant to help female employees feel motivated. The artist, J. Howard Miller, would probably be seriously startled to see its status in the modern world.

Sports and feminism have an interesting history together. This world has historically hoarded all the prize money, TV space, and sponsorship for male athletes, and only recently have female athletes started to claim an equal slice. With this in mind, Sport England launched "This Girl Can" to encourage women to exercise, regardless of their fear of judgement, embarrassment, or looking "unwomanly".

The most famous image from the "Votes for Women" campaign isn't actually for voting at all — at least, not directly. The 1909 art deco poster is actually for the suffragette newspaper Votes for Women, which sold 40,000 copies across the United Kingdom each week at the height of the suffragette movement. Hence the woman's elegant newspaper-selling bonnet and pile of papers. Suffragettes were, of course, campaigning for women's right to vote.

Virginia Slims mounted a new campaign in the 1960s to capitalize on the women's movement and the sexual revolution, selling a cigarette brand directly to women. Pretty unscrupulous, but the resulting slogan — "You've Come A Long Way, Baby" — became one of the key phrases of '60s and '70s feminism. And the ads for the brand, which ran for years in many different forms, was one of the first overtly feminist major campaigns.

This amazing ad for an amazing product — an engineering set for boys and girls that builds miniature working machines in basically any way you like — made a splash at the Super Bowl, when it became one of the major talking points between the games. Add in a Beastie Boys song scandal, and you have the criteria for a full-blown feminist overtaking of the nightly news.

This campaign by UN Women utilized a very clever means of expressing societal beliefs about women — Google search autocompletes — and some very good design to get its point across. The searches, unfortunately, are real. They were dated March 9, 2013, and the advertisers merely transcribed them. Which makes the point even more depressing.

With today's pink-dominated girl's toy aisles, the rediscovery of this 1981 Lego ad in 2012 by The Huffington Post went viral. It also raised the point that sexism in toys hasn't been a uniform trip towards more equality — and that in some areas, we seem to have gone backwards.

Dove's "Evolution" ad, which demonstrated the impossibility of beauty standards by showing the behind-the-scenes manipulation of a fashion model to appear unrealistically beautiful, was a bombshell in 2006. It won a huge host of awards, kick-started Dove's ongoing campaign about real beauty, and was probably a big inspiration behind today's feminist advertising craze.