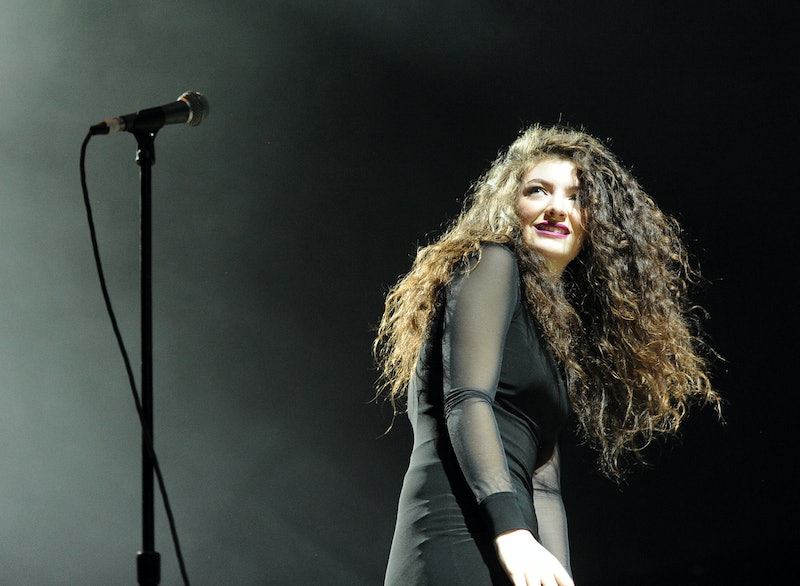 Absolutely no one was surprised when Taylor Swift threw a cocktail-dress-and-sparkler-infused 24th birthday party. We know better than expect edginess from T.Swift, and there's a sense of comfort one gets looking through the floral, softly Instagram-filtered pictures she put up from the affair, because they're exactly what we'd expect. And in such a world of oversexed X-rated pop superstars, sometimes that's rather nice. Sure, perhaps I'd hope to do something a bit more exciting for my own birthday party, but it seems kind of obvious that Taylor Swift would be happy with flower arrangements, staged photos, and sparklers. However, what did shock me was Lorde's presence at this girl-fest, and not just because 24-year-olds don't usually invite 17-year-olds to their parties.

Judging from the Instagram pics, Lorde showed up looking like a dark-haired T. Swift, similarly flowery and cuddly. And she looked adorable and they look like they all had fun, but gosh darn it, this is not the Lorde we've come to know and I felt so weirdly... betrayed. Just look at this:

It's just too cute. Who could even handle all that cuteness.

They even took stair pictures. What was this, a sorority spring fling or a goddamn party? I know it's unbecoming to be so hateful, but just look at them, LOOK AT THEM ALL.

The Lorde we know wears black like it's her job. She works fierce, untamed hair and is sickeningly awesome and feminist and mature. She has a cool looking boyfriend whose glasses I covet and she won't take shit from Selena Gomez or anyone. Lorde is generally "girl power" in a Joan Baez way to Taylor's Swift's "girl power" in a Powderpuff girl kind of way.

So it's not at all fair of me, but seeing pictures of her cuddling Tayor Swift and playing with sparklers and wearing a dress that appears to match Taylor's dress just weirds me out because whoa, this is Lorde actually looking her age for the first time ever. And I didn't expect to be so confusingly ageist about Lorde occasionally appearing to be a 17-year-old girl, which is what she is, and I sort of hate myself now for the whole thing.