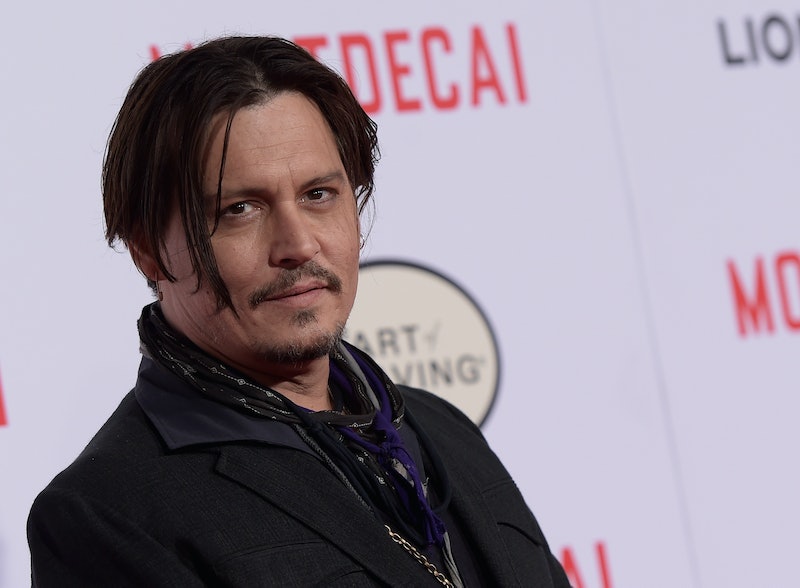 Dior has been teasing us all summer, first with news of a Hollywood leading man as the face of Sauvage, the house's first new fragrance in a decade, and then with a 15-second trailer for the commercial. Now, the Dior Sauvage commercial with Johnny Depp is finally here in full, and it's basically a Depp-fueled fashion fever dream.

There were a lot of distinctly Depp-ian elements at play here — eyeliner and rows of hoop earrings a la Jack Sparrow, an electric guitar solo evocative of his Viper Room days, and that goatee-and-purple-shades look that's been more or less omnipresent since right around the time Blow came out. Even the appearance of animals like a buffalo, a wolf, and a hawk seem to be referential of Depp's claims to Native American ancestry. Most striking, perhaps, are the undeniable Fear and Loathing in Las Vegas vibes, from the sleek classic car making a lone desert crossing to the slightly hallucinogenic animal cameos.

The commercial was directed by Jean-Baptiste Mondino, who has also directed videos for Madonna, Lenny Kravitz, and Vanessa Paradis, Depp's ex. It opens with Depp strumming a moody rendition of "Bad To The Bone" on an electric guitar in what appears to be downtown Los Angeles.

Suddenly, Depp huskily announces, via voice-over, "I gotta get out of here," and the film cuts to the actor speeding out of the city, past oil fields and into the desert. His inner dialogue continues as he ponders, with the obligatory furrowed brow, the age-old man-on-the-run question, "Which way?"

After taking his eyes off the road to observe a buffalo striding by on the empty highway, he pulls over, takes out a shovel and digs. A hawk glides by and a wolf suddenly appears, affixed to the roof of his abandoned car.

Depp violently begins to remove his jewelry — they're merely adornments from the material world, after all — and throws them into the hole. Then, just as the sun begins to set he stands up, weeping, as his narrative concludes with "I can feel it. It's magic. Sauvage."

Fragrance commercials can get seriously cheesy — remember Brad Pitt's Chanel commercial? There's a lot of emotion to pack into a relatively short time, multiplied by the fact that fragrance campaigns are now almost exclusively fronted by actors, who likely want the chance to show their acting chops more than a model would be inclined to. But with the repetition of so many of Depp's "things" — the desert, the solitude, the jewelry, the eyeliner — added to the overly familiar man-in-the-desert-waxing-omniscient-about-life (Matthew McConaughey pretty much cornered that market with his Lincoln MKC commercial) makes this feel especially incongruous. But hey, this is Depp we're talking about here — I would expect nothing short of high drama.

Watch the full clip below, and decide for yourself if Depp does right by Dior.