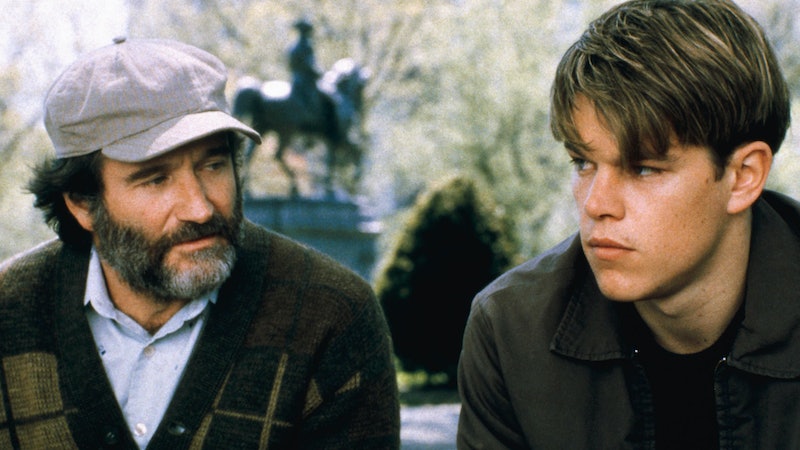 It's hard to believe, but as of two weeks ago, Good Will Hunting, the movie that introduced us to Matt Damon, Ben Affleck, and "how do you like them apples?" is 16 years old. Yet despite the movie's old age, the legacy of Good Will Hunting has never been more present, thanks to parodies on shows like Family Guy ("Stewie, it's not your fault!") and "remakes" like this Affleck-as-Batman version. Yet if nostalgia for the movie seems to be at its high now, just wait until the premiere of Good Will Hunting: The TV Show, an actual possibility now that The Weinstein Company and Miramax have entered into a distribution deal.

The agreement, announced on Monday, means that Miramax films like Shakespeare in Love, Rounders, and, yes, Good Will Hunting, could see Weinstein-produced revivals either in sequel form or in TV series. The idea for the deal was first announced back in 2010, but its details weren't released until today. While the news that some of the most acclaimed movies of the last few decades finding new life is undoubtedly huge, we're a little hesitant to see Shakespeare in Love 2 coming to theaters anytime soon. Still, there's one idea we can't help but root for, even if it's likely to not stand up to the original: Good Will Hunting: The TV Series.

We know, we know, the movie was perfect, and any variation on it is bound to be not even half as good. Yet while we agree with this wholeheartedly in most cases (see: 10 Things I Hate About You, My Big Fat Greek Wedding) a TV series based off of Good Will Hunting could actually be kind of great. The movie's ending, while perfect, left us with so many questions, and sixteen years later, we're still dying to know what happened to Will, Sean, Chuckie and everyone else. Here are the three biggest questions we'd like to have answered in Good Will Hunting, TV version:

1. Are Will and Skylar Still Together?

In basically the best finale scene of any movie ever, Sean (Robin Williams) finds a note from Will (Damon) that says, "I had to go see about a girl." It's a fantastic moment ("son of a bitch... he stole my line") and a perfect end to the story. Still, assuming that Will and Skylar ended up together in California isn't enough for us diehard Good Will Hunting fans. We need to know everything — did Will make it to California? Did Skylar forgive him? Are they still happy? Do they have adorable Bahston-accented children?

2. Is Chuckie Still Working at the Junkyard?

While everyone knew Will was going to do something amazing with his life, the fate of his best friend, Chuckie (Affleck) was less certain. A blue-collar worker, Chuckie encouraged Will to take better jobs, but never admitted to having aspirations for his own future. Did he continue working at the junkyard after Will left? Is he still there, all these years later? Did he ever reunite with his best friend?

3. Did Will Ever Get That Job?

When Will left Boston for California, he was also leaving behind a lucrative job offer arranged by Professor Lambeau (Stellan Skarsgard). It's commendable that Will decided to pursue his true love, but that was a pretty great job he had waiting for him back in Boston. Did he ever go back and take the job? Hell, did he even call them and say he wasn't coming? Did he take a job in California instead? Is he now the CEO of Google or a head professor at Stanford? We'll never know — unless Good Will Hunting really does become a TV series, and then we'll finally get to find out what happened to the characters we love so much.

More like this
At 28, Minnie Driver’s Personal Life Was “Falling Apart”
By Kate Dwyer
Amanda Seyfried Reflects On 'Mean Girls' & "Gross" Remarks That Men Made After It
By Jake Viswanath
'Dirty Dancing's Jennifer Grey On The Tearful Moment That Changed Her Relationship With Patrick Swayze
By Sam Ramsden
Cameron Diaz Just Recreated *That* Iconic 'There’s Something About Mary' Scene
By Rachel Mantock
Get Even More From Bustle — Sign Up For The Newsletter