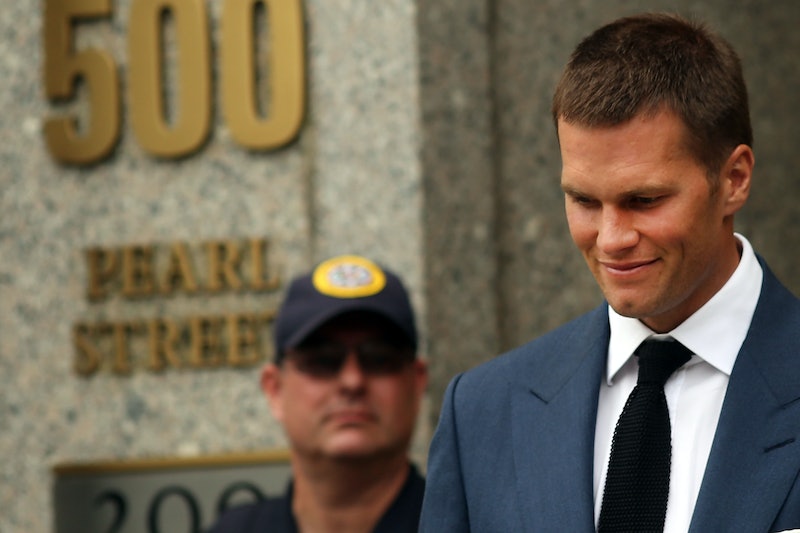 After months of investigation in the Deflategate scandal, a judge nullified Tom Brady's four-game suspension on Thursday. In May, NFL Commissioner Roger Goodell had imposed the punishment on the New England Patriots quarterback for his alleged involvement in deflating footballs during the AFC Championship game with the Indianapolis Colts. In July, after Goodell upheld that decision, Brady appealed the decision in federal court. Goodell, who was the arbitrator for the appeal, has now decided that Brady has provided enough evidence to reduce his punishment.

On Thursday morning, U.S. District Judge Richard Berman handed down the ruling after weeks of struggle between Brady, his camp, the NFL, and the NFL Players Association to reach a settlement. Brady and Goodell met before Berman on Monday, but the judge dismissed both sides after just minutes when he realized they were far from a settlement, rescheduling his ruling for later in the week. Thursday's decision essentially clears Brady's name in the Deflategate scandal and will allow him to start in the Patriots' season-opener next Thursday.

In May, a 243-page report by an independent investigator appointed by the NFL found that it was likely that Patriots personnel had deflated footballs during the AFC game in January, and that Brady was "at least generally aware" of it. Ted Wells' report stated:

For the reasons described in this Report, and after a comprehensive investigation, we have concluded that, in connection with the AFC Championship Game, it is more probable than not that New England Patriots personnel participated in violations of the Playing Rules and were involved in a deliberate effort to circumvent the rules. ... Based on the evidence, it also is our view that it is more probable than not that Tom Brady was at least generally aware of the inappropriate activities of McNally and Jastremski involving the release of air from Patriots game balls.

In light of the report, Goodell issued a four-game suspension against Brady, a decision he appealed. In July, after a comprehensive hearing of that appeal, new damning evidence of Brady's involvement emerged. It was discovered that Brady likely instructed his assistant to destroy his cell phone right before being interviewed by Wells and his investigative team. As a result, Goodell upheld Brady's four-game suspension.

Disappointed with Goodell's decision, Brady took his appeal to federal court in Minnesota at the end of July.

Judge Berman's decision to nullify Brady's four-game suspension means he will be starting on the field next Thursday in the season-opener game against the Pittsburgh Steelers.

This story is developing.