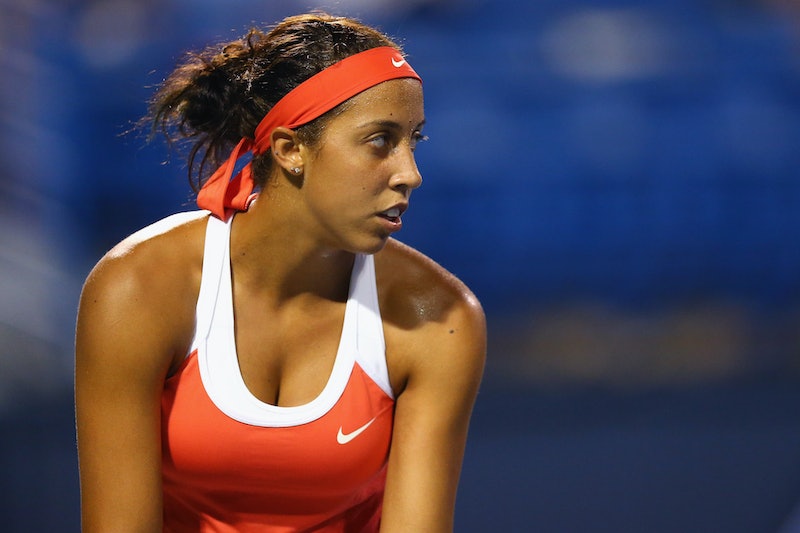 The US Open is in full swing, pun intended, and that means that all eyes are trained on the sensational, the inimitable, the national treasure that is Serena Williams. However, Serena Williams isn't the only woman in tennis worth paying attention to. Although Williams definitely deserves every bit of the attention she's been getting this year, I firmly believe that the country is capable of caring about more than one amazing female athlete at a time. And the good news is, at this year's, US Open there are plenty to watch.

The tournament is only on its fourth day, and already there have been lots of upsets on the women's side. Several top ranked players have already been eliminated — it is the end of tennis season after all, and it's hard to stay at the top of your game consistently all year long. Between that and the fact that the second ranked player in the world, Maria Sharapova, had to withdraw from the US Open due to injury, fans might find that there are a lot of unfamiliar names in the mix.

But never fear! There are still plenty of great players worth watching this tournament, including quite a few Americans. (Hey, just because we're all rooting for Serena to win, that doesn't mean we can't root for the other US players to do their best, too, right?)

Here are five women's tennis players besides Serena Williams to pay attention to during the US Open right now — because there are plenty of champs to go around.

Caroline Wozniaki, a 25-year-old from Denmark, has been playing professional tennis for 10 years, and her name is therefore probably familiar to tennis fans. Though she has yet to win a Grand Slam tournament, she has frequently made the quarterfinals and semifinals of the major tournaments. She has played in the final at the US Open twice, including last year when she lost to Serena Williams, with whom she is also close friends. She's a strong defensive player with a powerful backhand whose matches are never dull. This year she was ranked fourth going into the Open, and has already easily won her first match against Jaime Loeb. Her next match-up is against Petra Cetkovska, and is scheduled for tonight, Thursday night, in the main stadium following a men's singles match at 7 p.m.

Venus Williams is more than just Serena's big sister. She's also a long-time tennis star in her own right who has won seven Grand Slam titles, including two US Open wins; over the course of her stunning 21-year career, she's spent a total of eleven weeks ranked as number one in the world. She also spent time advocating for the World Tennis Association to pay women and men equal prize money, and was ultimately a large part of the reason that this change eventually came about. And off the court, she just earned a business degree.

Although Venus is still a powerhouse, she's not as strong a player as she was when she was younger. However, she did make the quarterfinals of the Australian Open earlier this year, and regardless of how far she advances at the US Open, she's a hard-hitting player who is always great to watch. She's already battled her way to the third round, and her next match will be against Belinda Bencic.

Venus's next opponent, Belinda Bencic, is also worthy of attention. Although she's just 18 years old and has only been playing professionally for two years, this Swiss player has already marked herself as someone to watch. She made it all the way to the quarterfinals of the US Open last year, and in a surprise upset, she actually defeated Serena Williams in the finals of the Rogers Cup in Toronto just last month — making her the youngest player to beat Williams since Maria Sharapova did so in 2004. She was the 12th seed going into the US Open, but she hasn't had an easy time of it so far; her second round match against Misaki Doi was a tough slog, and her third round match against Venus Williams is sure to be even more of a challenge for the young player. No matter who advances, though, both women are people to keep an eye on.

With Maria Sharapova having withdrawn from the tournament before it even began, Romanian player Simona Halep is seeded at number two. She's been competing at the professional level for five years, but has been particularly strong for the past two. She has yet to win a Grand Slam title, but she's had a great season this year, including impressive tournament wins at Dubai and Indian Wells. She's also made it to the third round of the US Open. She's fast, she's aggressive on the court, and she's definitely going places.

Madison Keys is another young player, just 20 years old, and she's definitely one of the more promising American players coming up in the game. This year, she made the quarterfinals at Wimbledon and the semifinals at the Australian Open; she also made one of the 10 fastest serves of the 2015 season. She's ranked 19th in the US Open and has made it into the third round of the tournament for the first time in her career. Her next match will be against Agnieszka Radwanska.

Of course, these are not the only women's tennis players worth watching. In fact, I'm not sure there is such a thing as a boring US Open game. You can watch any of these players — or any other matches — live and for free through ESPN here.