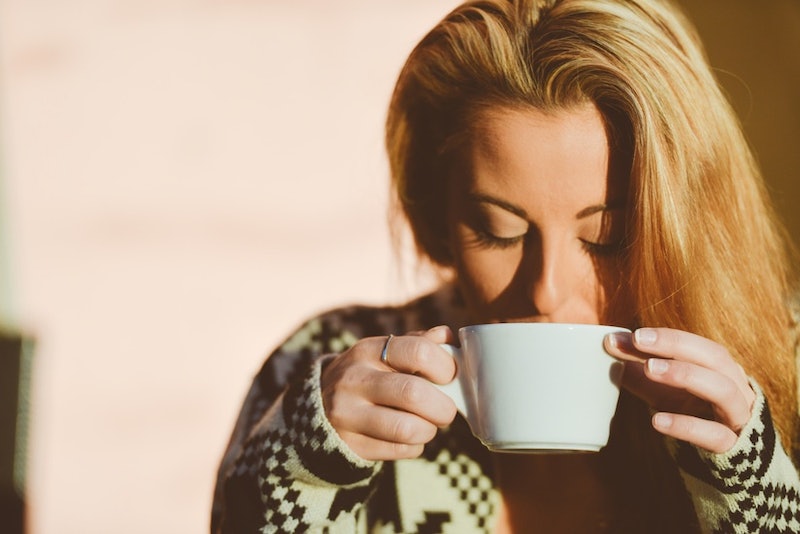 With crazy work schedules, personal lives, and trying to fit in all the other odds and ends of life, it's not all that surprising that many of us are hooked on coffee. Figuring out how to for cut back on caffeine is one thing, but following those tips is another entirely. And with Johns Hopkins Medicine reporting an estimated 80 and 90 percent of adults and children in North America who habitually consume caffeine, "the most commonly used mood-altering drug in the world," cutting back may be worth considering. A separate study out of Johns Hopkins even found that caffeine withdrawal can now be classified as a legitimate and diagnosable disorder, if you're still not convinced you may be hooked.

However, addictive properties aside, caffeine is definitely not the worst thing in the world. In fact, according to NPR, research out of the Harvard School Of Public Health has indicated that adults can drink up to six cups of coffee a day with no significant effects on their long-term health and mortality. However, if you consume a lot of caffeine or you're particularly sensitive to it, side effects like nervousness, upset stomach, and muscle palpitations are common, according to the Mayo Clinic.

When it comes to normal coffee consumption in particular, according to Dr. Daniel Hensrud of the Mayo Clinic in an article for CNN, "For most people who don't experience the side effects, the benefits far outweigh the risks." Hensrud said. "If you consume coffee, enjoy it but I wouldn't necessarily recommend taking it up if you don't like it."

Like most foods, caffeine affects everybody differently. For some it may be the highlight of your day and come with zero side effects, while for other people it may be unsettling to be so dependent on something. Either way, if cutting back is your goal, there are ways to get their, despite caffeine's habit-forming qualities. Here are five easy tips for cutting back on caffeine.

As stated in that Johns Hopkins study, caffeine withdrawal can seriously mess you up, so don't feel pressure to quit all at once. In an interview with Health, registered dietician and author of The Small Change Diet Keri Gans, recommends alternating your regular cups of coffee with decaf. Then, once you've totally transitioned to decaf (which also contains some caffeine), Gans says to alternate the decaf with a caffeine-free herbal tea until you're off caffeine completely.

2. Replace Coffee With Other (Non-Caffeinated) Beverages

Personal development writer Steve Aitchison used to drink "12 to 15 cups of coffee a day" until he learned to control his caffeine intake with a few tips. "Most coffee addicts have a routine," Aitchison said. "For example, the first thing they do is have a cup of coffee when they get up in the morning, then again after they have had a shower and put their clothes on and then again before they leave for work. " By replacing coffee with another hot, non-caffeinated beverage, you maintain the routine while eliminating the caffeine itself.

As you begin the caffeine detox process, nutrition expert Chris Daniels recommends setting up a time of day when you will absolutely stop drinking coffee, and setting that time back an hour week by week. He also suggests keeping a water bottle by you at all times so you are less tempted to drink coffee just for the sake of drinking something.

I know, I know — this one doesn't necessarily sound fun. But according to Gans, exercise is a natural and effective way to boost your energy in the short-term. And as an added bonus the exercise will up your endorphins, making you feel better overall, Gans noted.

According to U.S. News and World Report, there is hidden caffeine in a ton of foods, such as chocolate, gum, and certain over-the-counter medications, especially those aimed at easing the effects of migraines. Make sure you're reading labels to know exactly where your caffeine is coming from!