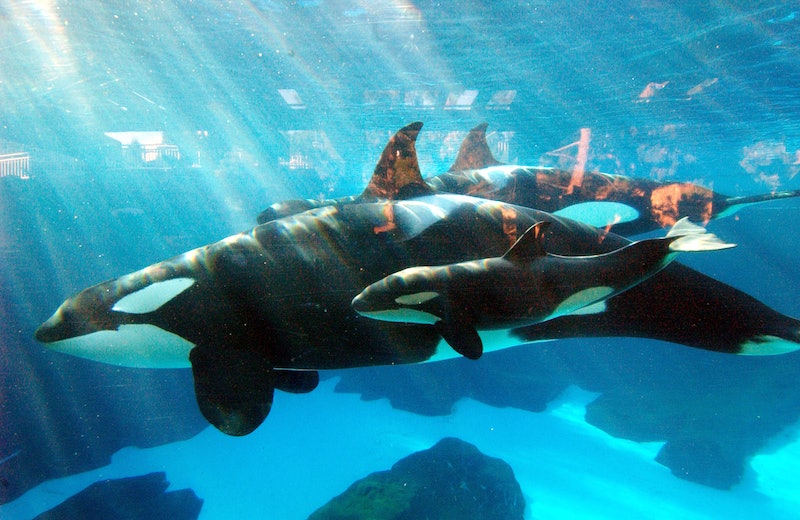 As of Thursday, at least six artists have cancelled their appearances at SeaWorld's February concert series: Trisha Yearwood, Martina McBride, Barenaked Ladies, Willie Nelson, Heart, and 38 Special, to name a few. The performers cancelled in protest following the Netflix-distributed, very-anti-SeaWorld documentary Blackfish. Since the documentary first aired in January, it's been picking up steam — even leading to a furious protest over SeaWorld's "A Sea Of Surprises" float at the Macy's Thanksgiving Day parade.

In case you've missed the SeaWorld saga of 2013, here are the SparkNotes: SeaWorld keeps killer whales (a.k.a. orcas) in small cages, makes them perform for food, separates them from their families. Animal-rights activists rage for years over the brutal captivity courtesy of SeaWorld, including violently capturing marine life and making orcas sleep in small, dark pools.

Along came the acclaimed documentary Blackfish , which uses trainer testimony to argue that the 2010 killing of trainer Dawn Brancheau by SeaWorld orca Tilikum was due to pent-up aggression from orcas.

For those who don't remember: after a routine show with Brancheau and Tilikum, in which the timing was slightly off when it came to the feeding of Tilikum, Brancheau was pulled back into the water by Tilikum and held there for more than half an hour. Brancheau was scalped, and her body torn apart by the orca. Prior to her death, Tilikum had been implicated in the deaths of two other people, one of whom was a trainee.

Blackfish does not suggest that orcas are violent animals — in fact, it claims that there's never been a single recorded orca attack on a human in the wild. "If you were in a bathtub for 25 years, don't you think you'd get a little psychotic?" asks one expert in Blackfish's trailer.

Along with 2009 documentary The Cove , which shed light on the barbaric dolphin-capturing techniques SeaWorld used decades before, Blackfish sparked a huge backlash against SeaWorld. Yes, said the chain's opponents, it's been decades since SeaWorld has captured marine life using violent means— but orcas are still mistreated there on a daily basis.

Most of the world's captured orcas live in SeaWorld facilities, where they've been bred with one another since their ancestors' capture. There, they perform for food, and are kept in marine pools the size of a swimming pool – a tiny, tiny fraction of the amount of space your average wild orca swims through every day. At night, they're kept in dark isolation.

Meanwhile, orcas have caused the deaths of a handful of SeaWorld and SeaWorld-affiliated trainers. Animal rights organizations like PETA claim that the long-term captivity and poor living conditions lead to the orcas becoming highly aggressive and even psychotic.

SeaWorld's side of the story is that the orcas are happy, friendly animals who love their trainers, the rush of performing, and are given enough space to roam. In Blackfish, several trainers attest that they believed that while working there.

In the first half of 2013 alone since Blackfish came out, SeaWorld's visitor numbers dropped by close to 10 percent — net losses of $15.9 million compared to the year before. A Macy's Thanksgiving Day parade float that featured killer whales frolicking, "A Sea Of Surprises," prompted a furious response. PETA, activist groups and, um, Alec Baldwin all wrote furious letters and threatened to stage protests. Macy's insisted that no activism was allowed during the parade (a.k.a.: guys, we're staying right out of this one.)

Now, with SeaWorld's series of February concerts coming up, performers are beginning to pull out in protest. It's not clear in all cases that they're calling for a change in marine-park policy, as PETA (and Joan Jett) has, but one thing is clear: their PR teams know it isn't good news for them to be at SeaWorld. Which means that the bad press for SeaWorld has gone from minimal, to very, very bad. Let's see what happens next...

More like this
The 10 Best Cat Puzzle Feeders
By Lauren Moison
My Picky Eater Dog Absolutely Devours This All-Natural Food
By Allison Berry
Laura Dern Said “Cultural Awareness” Made Her Rethink This 'Jurassic Park' Fact
By Grace Wehniainen
Colin Firth Revealed His Favourite Mr. Darcy (& No, It's Not Himself)
By Sophie McEvoy
Get Even More From Bustle — Sign Up For The Newsletter