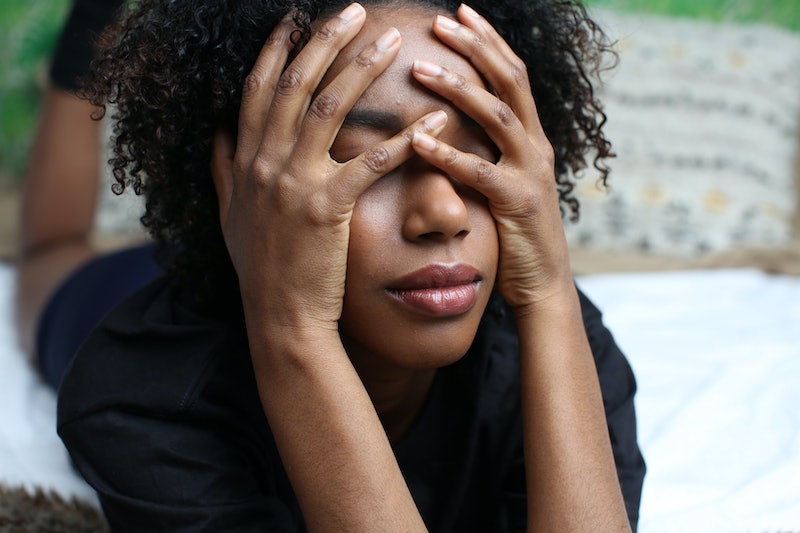 You seem to be doing everything right. From getting enough sleep to avoiding the fried donuts at your nephew's birthday party, you're taking every recommended step out there to feel healthy and happy. And yet you still feel cranky more often than not. And worst of all, you can't figure out why. As much as overarching lifestyle choices are important to keep in mind, we forget that seemingly minute, everyday comings and goings make a huge difference in our happiness. If we do happen to be in a bad mood, it changes the way we see the whole world, according to a 2009 study published in the Journal of Neuroscience. Researchers say that when you're grumpy, you can only see in tunnel vision — and suddenly, you can't notice the immense amount of joy that surrounds you.

A bad mood can affect you physically as well; it causes your blood pressure and heart rate to rise, interferes with healthy digestion, and increases the production of a stress hormone called cortisol. You get so consumed by stress that you can't sleep properly at night. I think that's enough to convince you that we should try our best to avoid moodiness — if not for ourselves, then for the people around us. After you've made an effort to eat well and regularly engage in physical activity, take a look at the little things, because they could be the main culprit behind your constant irritable feeling.

Here are eight small things that could be putting you in a bad mood.

1. Too Much Social Media

The more time you spend browsing your news feed and scoffing at your friend's black-and-white baby pictures and beach pics from their latest vacation, the more likely you'll feel crummy about yourself in general. A psychotherapist from Boulder, Colorado named Ashley Eder tells Psych Central that spending too much time on social media sites, especially Facebook, generates envy-stoking behavior. You stare at everyone's best versions of their lives, but you don't get the whole picture, so you end with "a comparison hangover."

A survey of 425 undergraduate students showed that those who consistently looked at their friends having fun on Facebook had lower self-esteem than their peers. Self-worth was even lower when the subjects spent time on the profiles of people who were not their acquaintances in real life; they reported that other people's lives were more exciting.

Be very careful about your time on social media, as it can turn you into a hermit. Instead, go out and interact with others in a real way, and make your own fun memories.

I used to be the kind of gal who did squats while I brushed my teeth and singlehandedly replied to emails as I vacuumed my living room. I thought I was being as efficient as humanly possible, but it turns out that we are just cluttering our own minds and preventing ourselves from functioning normally when we multitask. The most renowned Buddhist teachers, like the Dalai Lama and Thich Nhat Hanh, urge people everywhere (Buddhist or not) to do one thing at a time, and to do it deliberately and slowly.

Modern science backs them up. Studies show that doing two or more things at once reduces efficiency and performance; it even lowers your IQ to that of an eight-year-old. I doubt your co-workers and boss would be thrilled if you suddenly reverted back to childhood, so avoid multitasking when you can.

Apparently, it's not only important that we get enough sleep; it's also about when we hit the sack. According to the medical journal Psychiatry and Clinical Neurosciences, a study was conducted on two groups of people who slept the same amount, but went to bed at different times. The night owls — I imagine they're the ones who stay up late to browse through Facebook — were three times more likely to experience depressive symptoms compared to the ones who hopped into bed earlier.

Experts suggest that you gradually start changing your bedtime; start by going to bed 15 minutes earlier than usual, and slowly build up to going to sleep at a more reasonable hour. The sleep you will get will be more restful, and you'll likely wake up in a better mood, which will last throughout the day.

If you're like any other normal human being, you probably don't put much thought into how much magnesium you're getting on the daily. But science is pushing you to pay attention — magnesium deficiency causes damage to neurons, which results in depression-like feelings. Some case studies have shown that individuals suffering with clinical depression recovered in fewer than seven days when they regularly took magnesium supplements.

Most of the drinking water available to us is void of magnesium, and only 16 percent of the natural magnesium in whole wheat remains in the refined flour that seems to land on our plate more often than not. It's time to find other ways replenish ourselves. Your best quick fix? Dark chocolate.

The fake light that comes from your phone, TV, and yes, even your Kindle, could be disrupting your circadian rhythms and decreasing your levels of melatonin — a natural hormone that eases you into your beauty sleep. Not having enough melatonin in your system is linked to moodiness during the day. In fact, a study conducted on 516 people who were exposed to artificial blue and white light before bed each night were more likely to score higher on depression tests.

Try to read at night before you drift off into sleep. Or better yet, just climb into bed and go straight to sleep. I know that it sounds boring, but it's worth a shot. Also, invest in some dark curtains that block out all the city lights that may be pouring in through your window. You're more likely to get to bed earlier if you play your cards right, and you can kill two birds with one stone.

If you must use a computer, consider downloading f.lux, which takes out the melatonin-disrupting blue light on the screen.

Ever heard of tryptophan? It's an essential amino acid found in dairy, meat, and eggs, and when it joins forces with vitamin B, it creates the neurotransmitter serotonin, which is one of our trusted happy chemicals. Eating your Wheaties in the morning is the easiest way to get your fair share of tryptophan. When you don't, you could be facing an imbalance in serotonin, leading to nasty feelings. A University of Cambridge experiment gave some subjects a well-rounded breakfast, while the others got no tryptophan whatsoever. The latter group displayed signs of aggression that weren't seen at all in the former.

Be smart about what you eat in the morning, and don't settle for any packaged, processed foods. If you cover all your bases — protein, whole grains, and fresh produce — you'll avoid the grumpiness that those poor individuals experienced during the tryptophan study.

7. Being Around People Who Complain A Lot

Everyone has their whiny moments, and there's nothing wrong with letting off a little steam around friends. But there are some individuals in your life who are constantly feeding you negativity, leaving you emotionally drained and ill-prepared to go on with your busy day. Chronic complainers are totally contagious, and can suck the happiness right out of you — even if you don't realize it.

What's worse is that listening to whining makes you stupid. No, seriously: Research shows that being exposed to complaining for just 30 minutes eliminates neurons in your brain's hippocampus. It's only a matter of time before you start whining more, thus dumbing down everyone around you. Separate yourself!

Colors make a big difference in how we feel — especially the ones that surround us in our permanent dwelling. Red evokes irritability and anger, while yellow emits happiness, and blue communicates relaxation. Take a look around your bedroom, for example. What hues are you trapped in after a full day at the office? Everything matters, from the paint on the wall to the comforter on your bed. Try to surround yourself with shades that help you ward off crankiness.

Research suggests that the kind of paintings you have on the walls also affect stress and anxiety. It might be time to go from bare walls to a few pieces of art that have beautiful, peaceful landscapes or that capture a happy moment with the most important people in your life. These minor touches can be huge game changers.

More like this
This Psychological Effect Might Be Keeping You From Hitting Your Goals
By Lexi Inks
The Spiritual Meaning Of Angel Number 000, Explained
By Kristine Fellizar
Isa Guha Is Taking The Lead
By Charlie Mock
10 Stranger Things-Inspired Halloween Costumes For True Fans
By Emma Carey
Get Even More From Bustle — Sign Up For The Newsletter