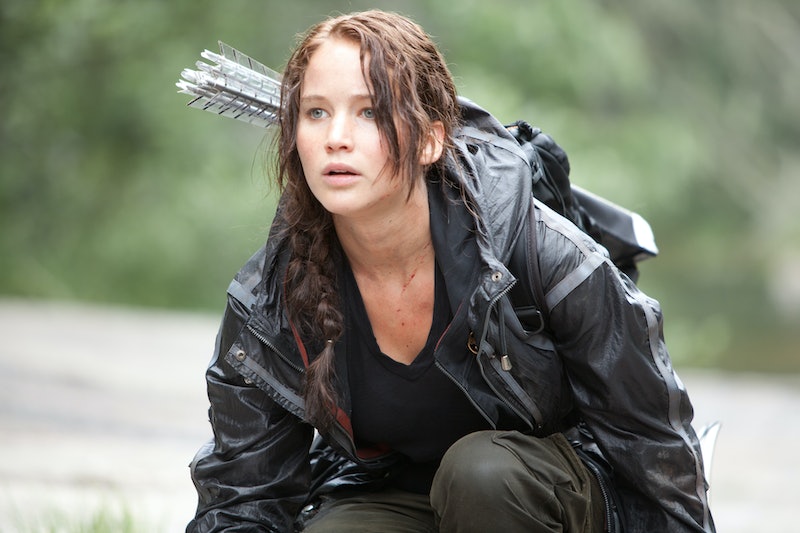 The YA genre loves its dystopias, and so do I. There's just something about a terrible world and the love that can spring in spite of it that draws readers in and refuses to let them go. Of course, they're not exactly the places one fantasizes about living in like they do with the wizarding world of Harry Potter or something — they're dystopias after all — but the question I always ask myself is this: What if I had to pack my bags and move into one? If I could choose any YA dystopia to live in, which one would I choose?

It's not an easy question to answer, given the fact that dystopias by definition aren't particularly pleasant places to reside, but I truly believe that I could earn the happy ending that all of our beloved female protagonists do: find love in the face of adversity; topple a terrible regime; find abilities that I didn't even know I had... but I'd also like to hedge my bets a little bit.

I've ranked the top 12 YA dystopias from the worst places to live in to the best. Do you think you'd be able to survive and triumph in these worlds? Even if the books may not be the best places to live in, they will at least be a terrific read. Take a look!

In spite of how pretty the dresses are on the covers of this trilogy, this is not a world that you would want to live in. Earth has been stricken by a plague after a botched effort to genetically perfect that human race, and now men only live until the age of 25, with women only living until the age of 20. That alone would be terrible, but when you add in the fact that women are often kidnapped and sold as wives in unwilling polygamist marriages for the sole purpose of making babies. Even with all of the components taken separately, it's not a great place to be, but taking it all together just makes things look completely bleak.

11. The Forest of Hands and Teeth Trilogy by Carrie Ryan

First of all, could a forest be called something creepier? It's unlikely. In The Forest of Hands and Teeth trilogy, the world has been overrun by zombies, confining most of the survivors inside of a small fenced in village in the middle of the woods. The biggest problem, of course, is the fact that most of your life will take place in a small village, but think of it this way: How many of you have a zombie survival plan? Well, that will absolutely come in handy here. Not to mention that the governing body is a group called The Sisterhood. Shady organization or not, it's nice to see a matriarchy in place for once.

10. The Unwind Series by Neal Shusterman

The only reason this isn't ranked lower is because it doesn't sell women into slavery, nor are there zombies. However, the world of the Unwind series is absolutely no picnic. After a second Civil War (this time over reproductive rights) tears the nation apartment, a new law is passed that says that children between the ages of 13 to 18 can be handed into facilities to be "unwound," meaning that they are taken apart and their organs get redistributed. Imagine your teenage years, would you come through all of that intact?

9. The Delirium Trilogy by Lauren Oliver

In a world where love is a disease and people get procedures done at a certain age to vaccinate themselves against it, this was a tough choice for me, as it sounds completely innocuous at first. No one is getting torn apart by zombies, or torn apart by the government. Unfortunately at this point one realizes that to remove love from most things is to remove the joy in most things. Think about family, friendship, or even the joy you take in what you do every day, and remove all the love from it. Not very utopian, right?

At first blush you may be wondering how the bleak futuristic landscape of Shade's Children, where children are held in facilities until their fourteenth birthday and then are taken apart and re-purposed into terrifying creatures could possibly be a better world to live in than the world of Delirium. The answer, of course, is that in the world of Shade's Children, you get to have cool magical powers, and in Delirium, you don't. It's the little details in these dystopias that really make them worth looking into.

Yes, the ranking is a little high for a world that pits kids between the ages of 12 and 18 in highly publicized and televised death matches... but think about it. Sure, in all likelihood I won't be born in the Capitol, where weird and awesome fashion reigns supreme, but I might be. Not to be a Capitol apologist, but although we know that the lives of those in District 11 and 12 are incredibly bleak, and people can become mute slaves for a whole number of infractions. Then again, if a 16-year-old girl can topple the regime, how bad could it be? In the grand scheme of things, the world of Panem isn't the best, but it also isn't the worst either.

6. The Giver Series by Lois Lowry

For those who raised an eyebrow, yes, The Giver is part of a series. This world is to dystopias what the character of Mario is to Super Smash Bros., completely average. Everything is black and white, everyone is completely content, and babies who weigh an ounce lighter than their identical twin sibling are immediately killed. OK, so that part isn't great, but in these uncertain times I can't help but wish for a world where I already know my career trajectory by the time I turn 12.

5. The Divergent Trilogy by Veronica Roth

Unpopular opinion time: I love me a good personality test. The Divergent trilogy makes Myers-Briggs look like a kindergarten level standardized test, and I am absolutely okay with that. Sure, the initiations to get into a different faction from the one you are born into are a little harrowing. Sure, if you fail you become Factionless and essentially homeless. Sure, there's a secret plot for one faction to another faction to attack a third faction, but it wouldn't be a dystopia without a little intrigue, right?

4. The Jewel by Amy Ewing

The Jewel is part of a trilogy called The Lone City trilogy, but since only the first book is out, I will have to judge the world on the merits of this one. The placement of The Jewel is a controversial one given the fact that the general idea is a strange mixture of The Hunger Games (different districts surround opulent capitol city, this time called The Jewel) and Wither (women are sold off as unwilling baby machines). For some reason, it turns out to not be half bad. Even the District 12 of The Jewel, a outer ring called The Marsh, doesn't seem like the most terrible of places to live. OK, so you lose your entire identity and dwell in the palace of royalty where you may or may not be assassinated by the enemies of your new boss until you are able to successfully pop out a kid, but you also get magic powers. Once again, magic powers are a big deal.

3. The Matched Trilogy by Ally Condie

In the Matched trilogy, a totalitarian regime that goes by the name of The Society has a hand in everything you do, from what books you read, what music you listen to, and especially whom you love. While this isn't fully ideal, there is a certain kind of allure to the idea that you could get matched to your ideal mate so early in life. What's so wrong about not having to worry about your future? Oh, yeah, that's right, the complete lack of autonomy that comes with that. Well, what's the point of living in a dystopia if you aren't going to fight to overthrow it, right?

2. The Selection Series by Kiera Cass

Illéa isn't the worst. Originally called the United States of America way back before a rather nasty war with China, one of the worst things that this country has to contend with are attacks from rebels to the north of the south. Even the caste system, numbered One through Eight (one being the King, Eights being homeless) isn't as terrible as it could be. Admittedly, prejudices run rampant throughout the castes, and yes, it's a bit of a nightmare if you are selected to become part of a reality show where at the end you might end up being queen, but imagine how awesome it would be to follow that competition? It's like The Bachelor turned up to 11.

1. The Uglies Trilogy by Scott Westerfeld

If someone were to tell me that they could take away all of my real (and imagined) physical imperfects at the age of sixteen and then put me in a beautiful high tech paradise where I would want for nothing, you bet your life I'd say yes. Of course there are drawbacks: you become vapid and shallow, there's a distinct doubt as to whether or not you are even you anymore, you're kept in hedonistic paradise very much like Brave New World, too busy with distractions to realize what the government is doing. If you dislike it, of course, there's a rebel outpost hidden from the regime (don't worry, there will always be a rebel outpost) where you can live out the rest of your life being yourself while also hiding, but that seems to be a lot of work.

All in all, there is no utopia in these dystopias, but at least they are terrific reads!