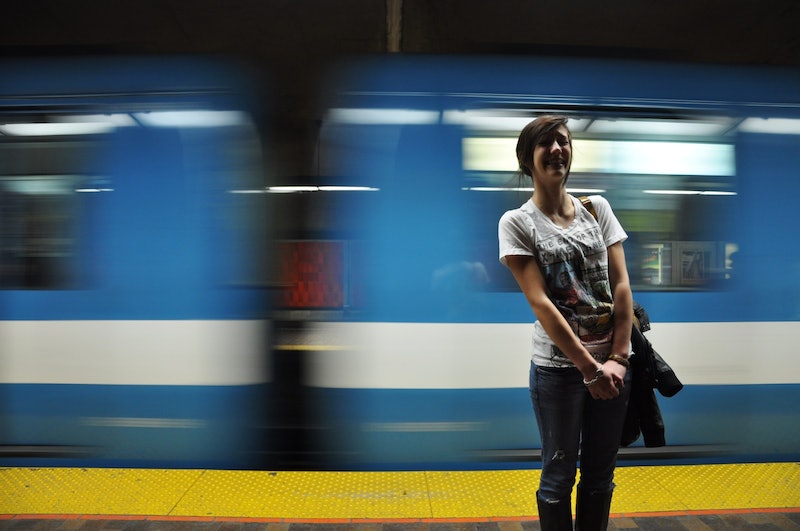 I've felt like an adult from the moment I've moved out of my parents' house at the age of 18, but apparently, I'm not typical in that fact. According to a new survey, most millennials in Britain don't feel like adults until they're 29! Now, obviously this may not hold true in America or other countries — though in my anecdotal, un-scientific, your-stat-teacher-would-not-approve-of-this opinion, it totally does. People who have their shit together way more than me say that they still feel like kids, I guess because they don't own a house, or a car, or they haven't paid off their student loans, or they're not married — whatever you're "supposed" to do as a grownup.

But look: I know 40-year-olds who haven't done any of those things. They're still adults! And so are you, most likely, if you're reading this! I know it's kind of sad, and you may not call yourself an adult in part because being a kid sounds more fun. But I say that extending your childhood an extra ten years, with the idea that someday all your fun is going to end and you're going to be responsible and lean in and own a house and have a perfect curly-haired baby and a doctor spouse and a purebred dog is some harmful, reductive BS that turns your life into a formula. Dividing your time into the fun years and the serious years is a recipe for a miserable, conventional, conformist adulthood.

On the Internet, this capitalist propaganda (yup, I said it) often takes the form of lists with headlines like the one on this very article. "16 Signs You're Finally, Actually A Grown-Up," one post says, a list that includes appreciating wine and having expensive kitchen appliances. That stuff doesn't make you an adult. Another list includes things like having a gym membership and having separate work clothes. These things don't make you an adult. Oh, and of course, according to all these lists, being an adult means wanting to stay inside instead of going out, because being an adult apparently means having a job that drains you so much that all you want to do is mindlessly stream Netflix and then go to bed.

OK, though — I might be confusing the point, right? Like these lists aren't about the legal age you're an adult — they're a reflection of people recognizing their own maturity and ability to take care of themselves. I get that. That's definitely something to celebrate. So as an unconventional adult who hates wine, hardly ever watches Netflix, and exercises at a public pool, I think I have an idea about what really makes you feel that way — no kitchen appliances involved. Here I present some signs not that you're an adult, but that you're a mature adult.

Not a requirement for growing up, but definitely a requirement for maturity. There's so much talk these days about the importance of loving yourself that I think it's easy to forget that listening and being compassionate and letting yourself be wrong and apologize are important. It's the difference between living a compassionate life and a selfish one. It's easier to let yourself become selfish when you're older, and lots of adults are among the worst, most selfish people in the world. Swallow that impulse and instead let yourself be open to the world around you. Respond to it thoughtfully.

2. You care about people and animals less powerful than you.

You tip waiters at least 20 percent — even when they're having a bad day or the kitchen messes up. (If that makes you defensive, really think about that. You don't know who messed up your order, but only the waiter gets punished for it). You brake for animals and try to buy humane meat, if you can afford it. You don't yell at the poor guy answering your customer service request.

3. You're nice to children.

On that note, you don't want to have children? That's fine! Me too! You should still be compassionate to other people's children, even if they're annoying, because children get messed up so easily. Don't go lecturing other people's kids, but try to set an example about right and wrong by the way you act.

You don't try to get back together with people who break up with you. You don't force situations that make you unhappy. But you also try to forgive people who wrong you.

5. You try to do something with your time on the planet.

Being mature means recognizing you're going to die. I don't believe in the idea of a divine purpose. Maybe you do. But we can both recognize that you have only chance to do something. Whatever that means to you, do it. I think about this poem "When Death Comes," by Mary Oliver. At the end of the poem, she writes:

Don't let yourself be simply a visitor to this world.

6. You let yourself be grateful.

I don't know if you need to be happy — definitely not all the time. But you should always try to be thankful for whatever good you've noticed around you.

The thing with all this advice is, that you could just read them and put, like, "be grateful" on a refrigerator magnet and still be an awful person in the same way that most people who go to yoga and read self-help books are awful, self-absorbed people. (nothing against yoga or self-help books — most people are awful and self-absorbed, period). It's easy to be cynical about this stuff and I often am. But when I think about maturity, I think about morality. And iI think if you're going to be an adult, you should be better than most adults. You should be an adult who's kind.