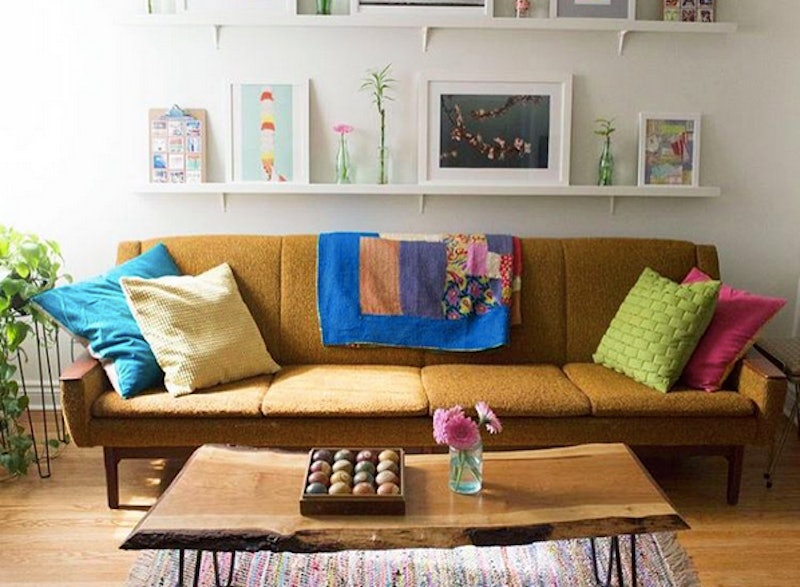 When you’re naturally messy, finding ways to stay organized can seem like pulling teeth. Why would you hang up your coat when you can just leave it on the floor and pick it up when you need it next? Isn’t it more convenient if you have all your papers strewn across the desk where you can easily see them? And how can you know what’s in your closet if it’s stacked on shelves rather than laid out on the floor? Being messy is a hard habit to break, but more often than not, it can lead to some maddening situations. It’s hard to feel productive when everything is a disorderly hodge podge, and it’s hard to feel light and at ease when you have clutter up to your eyeballs. So how can you break this messy streak?

If you decide on an intense life change, chances are your tidy habits won’t last long. The trick is to ease yourself into an organized life and turn it into a routine you can easily stick to — and that’s actually not as hard as it sounds! Below are five easy tips for a more organized life that will take minimal effort on your part to turn into habit. Try them out and see if your life becomes easier.

Being tidy takes practice, and the more you flex those muscles the tidier you'll become. To make organization into a habit, constantly keep an eye on those mess-prone areas and make it a point to keep them clean. According to self-help writer Charley Mendoza, "Every house and office has a hotspot for clutter. Usual suspects are the sink, dining table, cubicle, night stand, and bedroom drawers. Take note of these places and tidy them up daily."

Eliminate unnecessary stress in your life and automate everything that's able to be automated. That means bill payments, recurring task reminders, alarms, or office tasks. Not having to worry about missing bill payments or having to retype the same lists over and over can eliminate stress that you don't need. Automate everything you can and focus your energy on things that actually need your attention.

For example, I have certain tasks I need to do for work every day or every week, and instead of writing them down day after day I have recurring reminders that pop up throughout the whole year, seven days a week. This let's me forget about keeping them up in the air, since I'm not the one that has to remember to do them — they remind me themselves. It eliminates so much stress because I know I'll never forget to do anything.

3. Throw Out One Thing Before You Buy One Thing

Clutter is the fastest way to throw your organizational game into a tailspin, and the more stuff you own the easier it is for it to pile up on you. To cut back on the potential for clutter, try to live by this simple trick: Before you buy one new thing, make sure you get rid of one old one. For example, if I want to buy a new rug, then I have to get rid of an old one, or if I want a new pair of shoes, another pair have to go. This really makes you stop and think because what if you don't have anything you want to toss out? That signals you already have plenty and probably don't need to add more things into your living space.

4. Make Sure Everything You Own Has A Place

This seems obvious, but it was a total game changer for me when I actually took the time to do it. Everything you own should have its own home, whether it be lipstick tubes, "to do" scraps of paper, or the receipts in your purse. The reason why it's so easy to get your space cluttered is because the said clutter doesn't have a proper home: You toss your keys on your kitchen table, you take off your shoes by the door, or you leave the magazine underneath the coffee table. If you had designated drawers, bins, or cubbies for all these things, you'd automatically go and put the item away in it's designated area.

Take an afternoon and go to IKEA or The Container Store and stock up on boxes and trays that will help you assign every item in your apartment or room to its own personal space. If that feels like too much of a project, just zero in on your problem areas and organize those instead. For example, my sweaters are always a jumble on my shelves because I dig through them like a whirlwind when I need to find a specific one before I run out the door. It's the messiest part of my room and it gives me anxiety every time I open my closet. But once I got a stackable cubbie for them and separated them by color and thickness, the mess disappeared. Each one of them had their own category and home so it was much easier to keep it neat.

If you're naturally messy, getting organized can be a complete lifestyle change which sounds intimidating. Instead of expecting a complete 180 from yourself, start small by getting into the groove with a couple of tidy habits. For example, I'm as messy as they come. My apartment looks destroyed six days out of the seven, so becoming organized was something I had to constantly work on and be conscious of, which was exhausting. When I decided to start with baby steps and only expect myself to do just a few tidy tasks per day, it was a game changer.

Making the bed right after I woke up, wiping down the sink after my morning and evening routines, and washing a dish right after I used it was so much more doable than turning into a Type A clean freak over night. And after a while, those tidy tasks became second nature to me and slowly started expanding to other organized habits, like hanging up clothes right after I used them or straightening up my desk after each shift. Start small and create three habits that you can easily fall in step with. The rest will follow.

Like any habit, getting organized takes getting used to. You have to force yourself to go out of your comfort zone once or twice, and eventually you'll notice that things seem to look a little tidier. It might not be fun all the time, but it's definitely worth it.