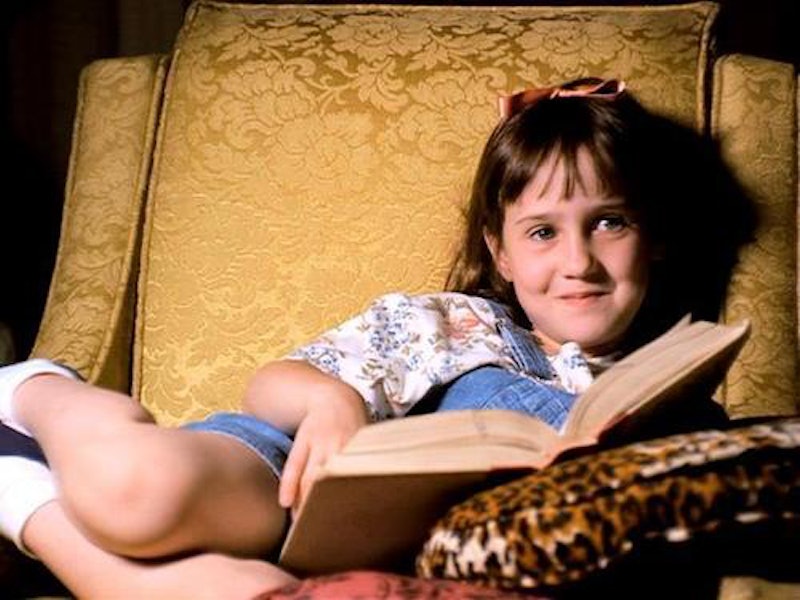 I did not come from a bad family, nor was I gifted with top notch telekinetic powers, but, as a badass kid with a bow in her hair, I adored Matilda. My YiaYia first took me to the film when I was a 5-year-old youth in revolt, and I still get wrapped up in that magic nearly 20 years later. But why? Well, aside from Matilda being a uniquely feminist film, there's a lot of real talk, creepy aesthetics, and adorable kid rebellion in this childhood classic.

Let's break it down. Matilda is a film that permeates our childhood, but it exists as an unconventional piece of work because of two things. First of all, it is certainly not a Disney film, and, although happily ever afters are possible, your parents can totally be awful without being steps. That's daunting in itself. And, secondly, it has a fair dash of creepiness, but it's also not a Tim Burton film, which would commit to full-throttle spookiness. Therefore, tonally, Matilda is something entirely new and refreshing compared to your other favorite kids films from the '90s.

"OK, but like, why is it so great?" Still not getting it? Let me outline all the reasons.

All of Dahl's books (which include Charlie and the Chocolates Factory and Witches), and their subsequent movie adaptations, are dark, dark, dark. Matilda is no exception, but, like all Dahl stories, we have the comfort that she'll get a happily ever after.

2. It Features A Strong Female Character

She's bright, she's unapologetic, and she is able to handle the burden of being in a crass, unloving family for the first six and a half years of her life.

Like, whatever, I was off eating glue when I was that age.

4. That Strong Female Character Is Also A Fashion Icon

She just makes that hair ribbon look so fly.

5. Her Passionate Love Of Reading Is Inspiring

I, too, preferred books to people as a child.

6. It Adequately Nails The Bittersweet Feels That Come With Using Books As A Form Of Escapism

I still get worked up when I think about how I'll never go to Hogwarts.

7. Also, This Movie Taught Me That Nearly Anyone Could Own A Library Card

This fact has helped me out during many great social lulls in my life.

8. She Exerts Her Rebellious Streak Long Before She Gets Her Powers

There is some powerful follicle sabotage in this movie, trust me.

So scummy, but, what can I say, I love his work.

10. The Ethereal Sweetness Of Miss Honey

Not to mention EVIL with a capital E.

12. Murder Is Addressed In A Children's Film

Like, isn't it strongly implied that Trunchbull killed Miss Honey's father to inherit the house?

13. This Exercise In Hair Brutality

Like, she goes full Mario on that small child.

So grotesque, I can't watch it without needing a glass of milk.

15. It Properly Nails The Feeling Of Victory You Get When You Eat A Whole Chocolate Cake By Yourself

Though not the regret, nor the vomiting.

16. It Focuses On Female Friendships

17. And It Passes The Bechdel Test Several Times Over

Oh yeah, the psychic powers are pretty cool, too.

19. The Fake Haunting Is A Stroke Of Brillance

And it was almost successful, if it wasn't for that ever-so-fashionable hair ribbon.

20. Matilda Accomplishes What Every Child Wants To Do: Take Over The School

When was the last time you led a mutiny against an unjust dictator?

22. Most Importantly, Matilda Teaches You That Blood Is Not Thicker Than Water

Sometimes people just come from bad family situations. And you shouldn't take abuse from anyone, even if they're biologically your kin. You make your own family.

23. And At The End Of The Day, You Have The Power To Make A Change In Your Life And Get Your Happily Ever After

It may not be straight-up mind control powers, but still. Matilda is a beacon of hope that proves we can take charge of our destiny, fight injustices, and find the people who will love us. And you know what? That's a great message to impart on little girls.