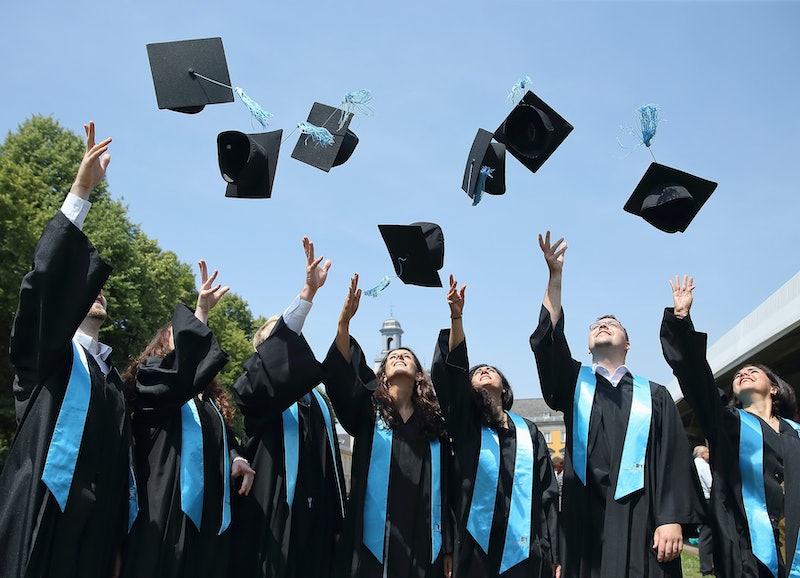 People like to call Millennials all kinds of names — lazy, entitled, self-absorbed — but there's one surprising name that our generation apparently doesn't like either. According to a Pew Research poll Millennials don't like to be called Millennials. Well, given the fact that every time we hear the term it's probably because adults are insulting us and telling us how horrid our generation is, I can't imagine why that is. Still, I guess this puts me in the minority, because I actually love my generation and I'm super proud to call myself a Millennial.

According to Pew, only about 40 percent of people age 18 to 34 describe themselves as "Millennials," even though that's technically what they are. Fully a third of people in that demographic actually identify themselves with Generation X, which consists of people who today are 35 to 50. For contrast, more than half of Baby Boomers and people from Generation X are fine with referring to themselves as such. And this isn't the first survey to find that Millennials want to distance themselves from the label.

So what gives? Well, my guess would be that young people, being the tech-savvy and aware people that we are, have picked up on the fact that most adults don't think much of Millennials. It's hard to hear negative things about your generation constantly, consistently, and from numerous respected sources, and not want to distance yourself from the label. Still, I personally think that the pundits and thinkpiece authors are wrong, and that in fact the people that make up my generation are amazing. So allow me to take this opportunity to clear up a few of the myths and misconcetions about my generation and explain why I am proud to be a Millennial.

There are no shortage of people who seem to think Millennials are lazy. The idea seems to be that we don't want to work and expect everything to be handed to us because we are lazy and entitled and awful.

Not only are Millennials the largest generation in the U.S. workforce right now, but we also work crazy hours. Graduates in 2012 asked how many hours they expected to work a week said, on average, 72. We're expected to always be available to our bosses by phone or email. We're also expected to spend a lot of time working for free before anyone will give us a real job. Until you have logged full time hours for no pay, you don't get to call my generation lazy.

People love to call Millennials self-absorbed. I guess it's not enough to say that we're selfish; it's also important to stress that we don't even notice things other than ourselves. Many Millennials also describe themselves this way, probably because the myth is that widespread.

Reality: Millennials Are Incredibly Involved In The World Around Us

Though it might seem like we're oblivious while tapping away on our smartphones, what you have to recognize is that we're using those phones to read news articles from around the world, look up a wealth of information, and connect with people across the globe. Millennials are, in fact, incredibly involved.

Everyone wants to know why Millennials aren't more grateful. Why don't we respect our elders? Why are we so spoiled? What gives?

Millennials earn less at this stage in our lives than our parents' generation did. Wages aren't going up, either. So it's kind of hard to be grateful for all the opportunities the former generations gave us when really what those opportunities seem to amount to is a chance to be overeducated and underpaid.

Our generation has taken on a huge burden that we never asked for — and yet we're managing to make the most of it. That's why I'm proud to be a Millenial. Actually? We're pretty awesome.