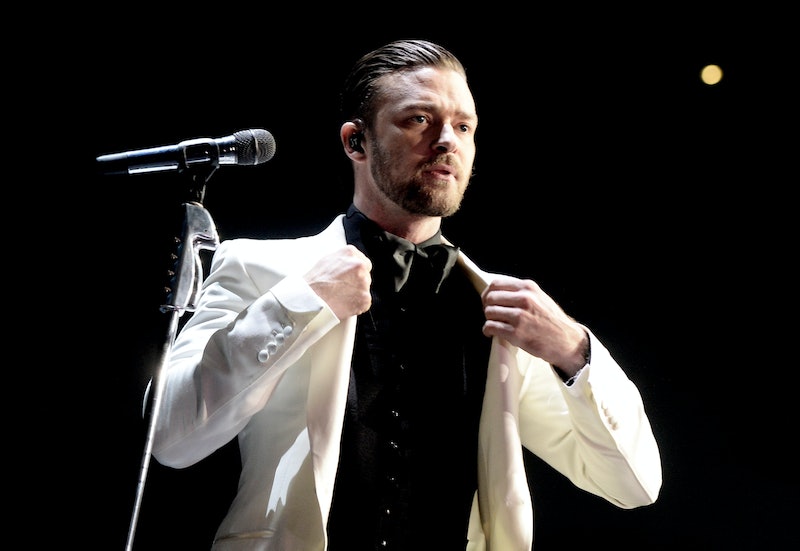 Just when I think I'm sick of public proposal videos, Justin Timberlake changes my crummy attitude. During a concert Sunday night, Justin Timberlake brought fans Josh and Kim onstage and said into the mic, "Josh called me earlier. He's got something he wants to tell you." The crowd went nuts because DUH. What could Josh possibly want to tell Kim? That he lost their ticket for the concert venue parking garage? That he forgot to pick up laundry detergent? Nah, man. Proposal time! He got down on one knee, the crowd went ballistic, Timberlake ran out of the way, and Kim was beside herself.

I've got to admit, it was pretty cute. I know, I know. I'm not made out of ice after all. There is one thing that's a little unclear: How did Josh get ahold of Timberlake to plan this? Is that a thing? Is there a "Justin Timberlake Proposals Hotline?" And while I'm peppering the universe with questions, is there a "Celebrity Proposals Hotline?" Because yes, while this was certainly adorable and memorable, Timberlake wasn't the first celeb to orchestrate a proposal. Which other famous folk have been a part of fans' journey to matrimony? Here are just a few:

Inspired by "Single Ladies (Put a Ring On It), a man got down on one knee in front of everyone at a Beyoncé concert and proposed to his girlfriend. Bey was all about it. I was all about it. And then "Halo" happened afterward! AUGH! What a dream.

Boyz II Men and Kia took part in a surprise proposal. Lovebirds Nikki and Stephen went on a road trip (in a Kia), and while they were at dinner one night, BOYZ II MEN SHOWED UP AND SERENADED THEM. And then Stephen proposed. Amazing? Amazing.

The actor helped out with a very sweet, heartfelt proposal video. What's happening? Am I feeling all of the feelings at once? Yep. Yep I am.

You caught me. I guess I don't hate proposal videos at all.