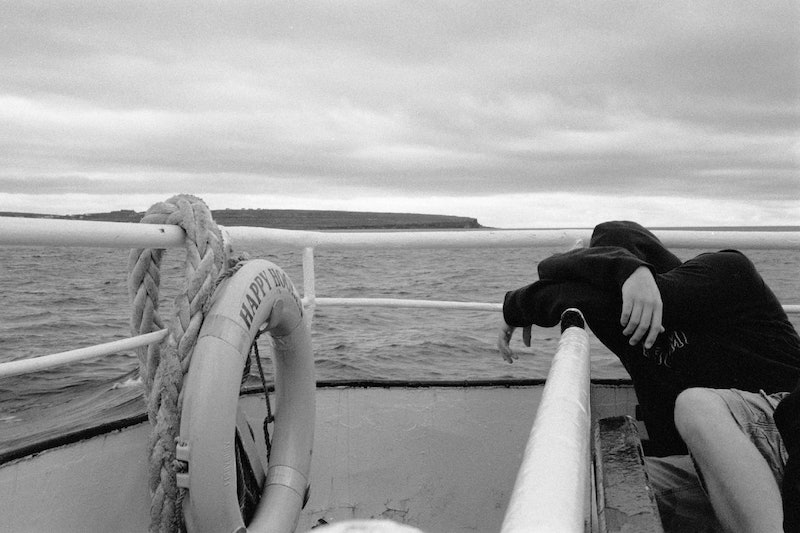 Humanity has found cures for tetanus, smallpox, and polio over the centuries, but when are we going to come up with a cure for seasickness? Anyone prone to motion sickness has found themselves wondering this at some point or another, usually while clutching a ship's railing and struggling not to hurl everything you've eaten in the past week over the side. (If you think that sounds gross, try living through it.) Tragically, there's still no real cure as of yet, but thanks to the miracles of modern science, researchers believe they're on the track to developing one within... 10 years.

OK, it's not exactly ideal. Considering what scientists are up against, though, it's pretty freakin' awesome news. Motion sickness has baffled researchers for centuries; the ancient Greek physician Hippocrates made mention of "motion disorders" in his writings, and ginger has been touted as a remedy for thousands of years. Poor Charles Darwin was so plagued by seasickness that he was incapacitated for days at a time. "I can scarcely conceive any more miserable state," he wrote in his diary during a sea voyage in 1831.

According to new research, however, the days of dizziness, nausea, and that icky layer of sweat that comes from seasickness could be drawing to an end. Rejoice, my people!

A study from the Imperial College of London found that a mild electrical current, when applied to certain parts of the brain, prevents motion sickness altogether. The electricity serves to reduce the confusing signals reaching the part of the brain responsible for processing sensory information, which effectively prevents motion sickness from ever setting in. Participants who wore electrodes on their heads for 10 minutes before sitting in a chair that simulates motion sickness were less likely to feel sick, and they recovered faster than those who received no electrical currents.

Electrical signals are all well and good, but how is that going to lead to an everyday cure? That's where the 10-year wait comes in — according to lead researcher Dr. Qadeer Arshad, the cure may end up being something like a TENS machine, which uses electrodes to provide nerve stimulation that reduces lower back pain. In fact, Dr. Arshad hopes that they will be able to develop a cure using cell phones, which you could plug in to the headphone jack. "In either case, you would temporarily attach small electrodes to your scalp before travelling," he explained in Science Daily.

It sounds pretty nerdy-looking, but as Professor Michael Gresty points out, most of the current cures are in tablet form and make users incredibly drowsy. "That's all very well if you are on a short journey or a passenger, but what about if you work on a cruise ship and need to deal with motion sickness whilst continuing to work?" he asked.

If your motion sickness has been holding you back from your dream of reenacting the Lonely Island's "I'm on a Boat," worry not! Your salvation is at hand — just give it another few years.