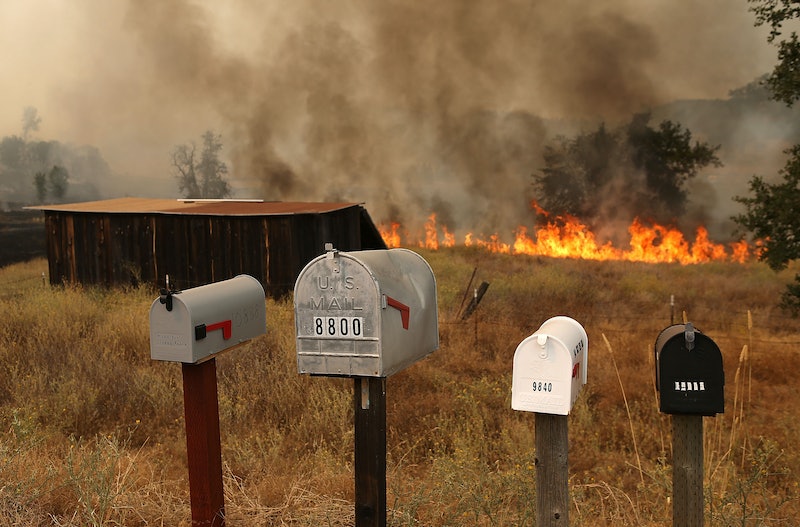 An immense and still growing wildfire has been ravaging California's Sierra Nevada forests for more than a month, shutting down campgrounds and closing roads. Because of a prolonged period of drought, this summer has been particularly bad for wildfires. This latest fire, named the Rough Fire and burning east of Fresco in central California, the fire grew 85,894 acres Saturday morning — that's nearly 135 square miles. It's officially the biggest active wildfire in California, though there are other destructive fires burning across the West Coast in seven other states. But this isn't out of the norm this year. By August 2015, there had already been 4,382 wildfires throughout the country, particularly in the Golden State, and the photos of the California wildfires are devastating.

Officials say that the Rough Fire is currently only about 25 percent contained and that the humid weather is conducive to slowing its spread. "Humidity is high and light winds are pushing the fire back onto itself," U.S. Forest Service spokeswoman Lyn Sieliet told the Los Angeles Times. More than 2,000 firefighters are working to stop the fire that began July 31, sparked by lightning strikes. Since then, the fire has spread to the Sierra National Forest, Sequoia National Forest, and Sequoia and Kings Canyon National Park.

In California alone, there are half a dozen fires burning, but Daniel Berlant, a spokesman for the California Department of Forestry and Fire Protection, told the Associated Press that the past two months were worse. And indeed they were.

The ravaging fires this summer has destroyed hundreds of homes and burned more than 8 million acres in Oregon, Washington, Idaho, Montana, California, Nevada, and Colorado.

The Rocky Fire, the biggest this year, burned for two weeks and destroyed 43 homes and charred 70,000 acres of land.

Within two weeks, another fire tore through Lake County. The Jerusalem Fire chewed up 25,000 acres of land and destroyed one home.

In mid-August, it got so bad that the National Interagency Fire Center recruited 200 active duty soldiers to battle the West Coast wildfires alongside 25,000 firefighters.

It was the first time nine years that soldiers had been called to fight fire. The NIFC also mobilized fighters from Australia and New Zealand, and Florida's Forest Service has sent more than 500 firefighters to help.

Unfortunately, right now is the peak of wildfire season, experts say. As the temperature cools, vegetation remains dry from the summer. In the autumn, winds pick up speed and therefore becomes more likely to fan a spark.

In California's Lake County Thursday, another wildfire spread to 450 acres and caused evacuations for residents who live in the area. The so-called Elk Fire was at 20 percent contained, but officials said people should be prepared to leave their homes at a moment's notice.

Currently, the Joaquin Valley Air Pollution Control District has issued health warnings regarding air quality because of heavy smoke, prompting many campers to reconsider Labor Day Weekend plans. The U.S. Forest Service recommends traveling to the mountains south of the fire and warns that children and the elderly are especially vulnerable.

The worst news is that wildfires will remain in the foreseeable future for California if the state's record-breaking drought stretches into its fifth or sixth year. This is likely because of climate change. A study published a study published by the American Geophysical Union warns that perpetual higher temperatures will make drought even more routine.