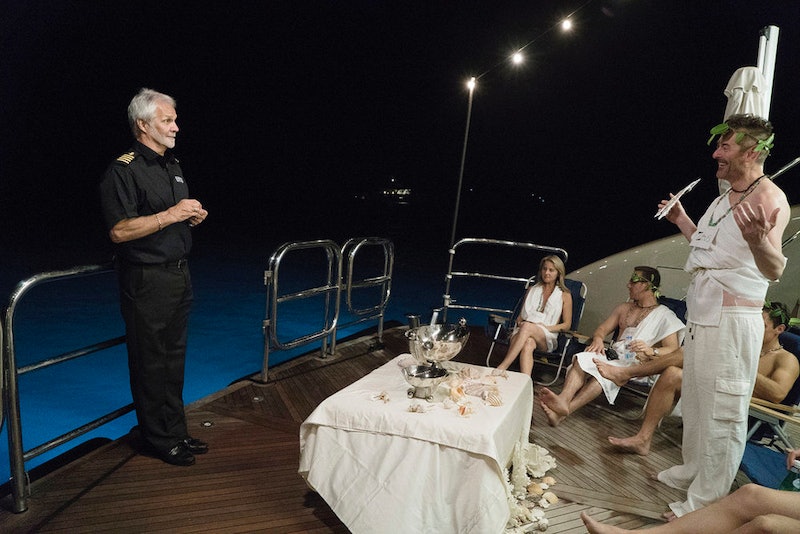 It's lucky to find a well-paying career that doubles as a passion, and many people have to settle for one or the other, even reality stars. So how much does the crew of Below Deck make? They all seem to love the sea, though their salaries don't compare to those of the rich and famous people who charter their services. But being a steward or a deckhand seems like a great job. Flexible schedules, plenty of time outside, and the shot at some major tips all combine to make this a perfect career path for anyone who loves boats and can manage service with a smile.

The crew that's actually featured on Below Deck succeeds and fails to various degrees, but their profession is one that takes a certain combination of skills and makes Captain Lee's plane ticket policy totally necessary. Once you hire someone for a charter, you're stuck with them until it ends. If you've ever been worried about your performance review at work, at least be thankful that you're not marooned at sea with an angry boss. Anyway, the actual salaries vary depending on the different jobs available to the crew. But the best way to ensure that you get paid well is to provide amazing service, because that $1,000 bonus at the end of each charter is what everyone is working towards.

According to a reference guide by Luxury Yacht Group, which provides salary ranges for all yachting roles quoted here, a captain can make from $7,000 to $20,000 a month, depending on experience and the size of their yacht. The Eros is 160 feet (on the large side), while Captain Lee's Bravo bio says he has 20 years of experience, and has had his captain's license since he was 35. So he probably makes closer to that $20,000 figure.

Kate, as the chief stew, takes on a significant amount of work above and beyond the normal duties of a steward. And she's had years of experience, so I'm willing to bet she maxes out LCG's estimate of $9,000 a month.

Back on the deck crew, a bosun will take home somewhere in the range of $3,000-$6,000 a month, which seems low compared to the amount of responsibility Eddie's taken on managing the deck crew, though he could have a unique rate due to that.

Don seems pretty insistent on the difference between an engineer and a deckhand, especially because he feels that an engineer usually doesn't have to listen to the bosun. Luxury Charter Group has an estimate for exactly that role, proving it must be somewhat common in the yachting community. Turns out Don is probably making between $3,000-5,000 a month.

As Kate's second in command, Amy, qualifies for somewhere between $2,500 and $5,000 per month, depending on her experience and what she was able to negotiate, because Amy's ability to sweet talk must make it easy for her to coax even the toughest yacht hiring service into a few dollars more.

She probably makes about $2,500 per month, which could be equal to other crew members depending on where they fall in their various salary ranges.

Connie might be the hardest working person on the ship, and yet her estimate is $4,000 a month, based on LCG's cross section of yacht size and experience. Emile has less experience than Connie, so he's probably making closer to $2,500 per month.

Leon is an incredibly experienced chef, but he hasn't been getting along with the rest of the crew because he doesn't have the same yachting experience as many of the others. But that doesn't stop him from earning up to $12,000 a month, which may explain his "F the haters" mentality so far. Let's hope that figure is enough to bring Ben back.

Basically, when a yachtie is working, for the most part they are making a good a salary. But as Below Deck has demonstrated, the hours can be very long, charters can be scarce at certain parts of the year, and getting fired can happen at any time. Build experience and work on a large boat of a challenging size, however, and you will find that the life of a charter yacht crew member can be a great way to make a living.

More like this
Here’s How Much It Costs To Rent The St. David Yacht On 'Below Deck' Season 10
By Gretchen Smail
Mike Tindall’s High Earnings Amount To A Royal Flush
By Darshita Goyal
Chris Moyles Is One Of The Richest 'I'm A Celeb' Campmates
By Sam Ramsden
Matt Hancock’s Net Worth Is A Political Minefield
By Maxine Harrison
Get Even More From Bustle — Sign Up For The Newsletter