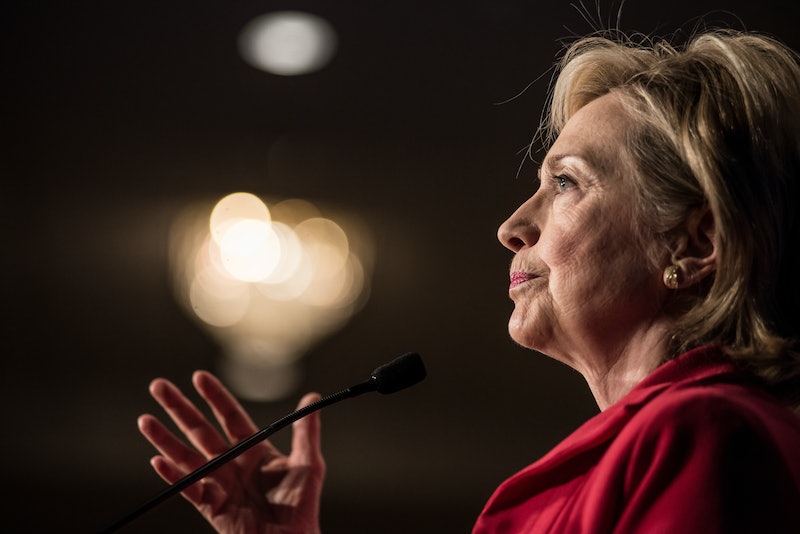 Saturday marked the 20th anniversary of Hillary Clinton's speech at the U.N.'s Fourth World Conference on Women, which occurred on September 5, 1995. The lengthy, powerful remarks that Clinton delivered almost didn't come about due to political unrest in China. An ultimatum was made following the arrest of prominent activist Harry Wu in which Clinton would not deliver her speech if the Chinese government didn't release Wu prior to the event. All worked out and Wu's initial 15-year sentence was effectively dissolved. Clinton's subsequent appearance marked an important moment in international women's rights advocacy. Innumerable quotes from Hillary's 1995 women's rights speech still ring true today.

The speech was delivered just outside Beijing while Clinton was still First Lady and had yet to formally enter politics. Her remarks highlight a consistent commitment to women's rights, which she'd addressed that same year by helping to establish the Department of Justice's Violence Against Women office long with Attorney General Janet Reno in addition to working extensively with Madeleine Albright on similar issues. Clinton has consistently worked hard to address a wide variety of women's rights issues via both the Clinton Foundation and as an elected official. During her two terms as a New York senator, Clinton further broadened her focus to include children and family rights, all of which are touched upon in her 1995 women's rights speech.

Clinton began the speech first by highlighting an important oration that preceded her own in Nairobi during the U.N.'s Third World Conference on Women. The 1985 conference marked one of the first times that the issue of domestic violence was highlighted on an international level:

It is conferences like this that compel governments and peoples everywhere to listen, look, and face the world's most pressing problems. Wasn't it after all — after the women's conference in Nairobi 10 years ago that the world focused for the first time on the crisis of domestic violence?

Clinton's earnest plea for those advocating for women's rights advocates to strive for religious understanding is especially important given the many issues still faced by those in more orthodox faiths. Even in appearance, it can be difficult to determine whether a woman is comfortable and respected, as with the prevalence of burqa bans in Europe. Clinton had this to say about respecting women's rights and their faiths:

We need to understand there is no one formula for how women should lead our lives. That is why we must respect the choices that each woman makes for herself and her family. Every woman deserves the chance to realize her own God-given potential. But we must recognize that women will never gain full dignity until their human rights are respected and protected.

Clinton further reaffirmed that point and highlighted the ways in which human rights documents like the U.N.'s Vienna Declaration and Programme of Action, which was adopted in 1993, are pivotal to absolute equality:

The international community has long acknowledged and recently reaffirmed at Vienna that both women and men are entitled to a range of protections and personal freedoms, from the right of personal security to the right to determine freely the number and spacing of the children they bear. No one — no one — should be forced to remain silent for fear of religious or political persecution, arrest, abuse, or torture.

Clinton's somber list of the many human rights violations that women and children face on a day-to-day basis is perhaps the most evocative section of her speech, including societies in which girls are valued less than boys at birth. Gender discrimination is still a common issue in countries like India and has yet to be completely addressed:

Clinton's list of women's human rights violations continues on with cases of egregious violence especially in the face of war. Currently, ISIS has committed some of the grossest offenses, abusing thousands of Yazidi women. Clinton strongly condemned such abuses:

Clinton continued her evocative list of human rights violations that women still face today, including the brutal practice of genital mutilation. According to the World Health Organization, over 125 million women have been affected in 29 countries. Clinton said:

One of the most powerful quotes in Clinton's speech comes toward the end of her speech. Although seemingly obvious, the whole world needs to hear the fact that women's rights are human rights and thus just as important:

An official annotation from Clinton herself about the speech shows just how important those remarks are. The Democratic presidential hopeful has had people the world over repeat her iconic phrase, showing its impact and importance. "It's always gratifying for me," Clinton says. Likewise, her 1995 women's rights speech has truly been something we can all be thankful for.