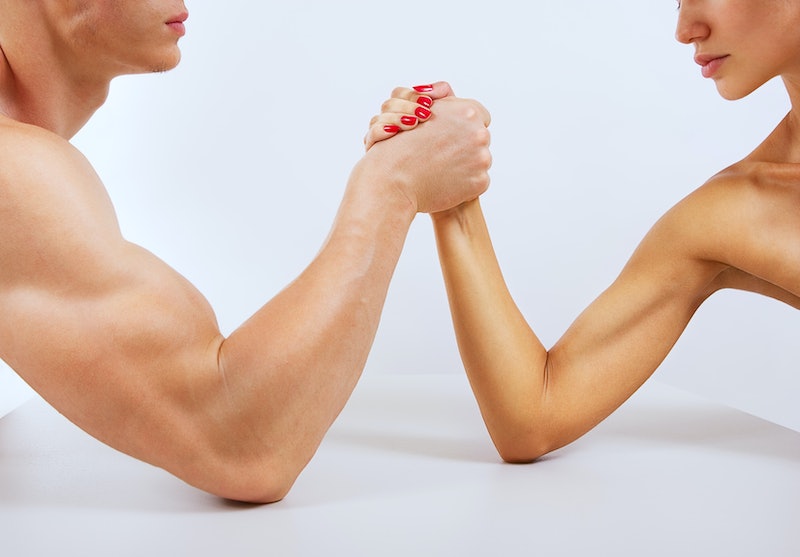 Not quite sure how to respond to the #meninist and #meninisttwitter hashtags that have been trending on Twitter since yesterday. The idea behind "meninism" is that poor, oppressed men need their own movement to combat feminism and take back their rightful, superior place in society. Bleh. Search for #meninisttwitter and you'll see the same ideas that motivate a lot of men's rights activists, dressed up in a new name that positions it as a direct counterpart (or antidote) to feminism. And how silly. Because as many on Twitter have pointed out, we have a pro-male movement already: It's called by various names, such as "society" or "the world at large."

A quick Google search for "meninist" reveals that the word was once proposed for use by male allies of the feminist movement. There's a meninist organization (based in Woodstock, NY) dedicated to equal rights and opposing "all forms of misogynist behavior and sexist attitudes." But today's #meninist disciples (launched by Meminista Jones) are more into opposing things like...

Some are meant to be benignly funny (and I've seen a few that even succeed), but the majority wind up bitter and misogynist even when attempting humor, in addition to the unabashed rants and hatefulness. Of course, there's been some funny/smart backlash from female and male feminists.

That one is getting retweeted by a lot of guys seriously, but I think it was meant in jest.

It is a known fact that members of the "manosphere" love fedoras, with the likelihood of fedora-wearing rising in proportion to how much they also believe in "Game."

And some just want to quibble about linguistics. But right?