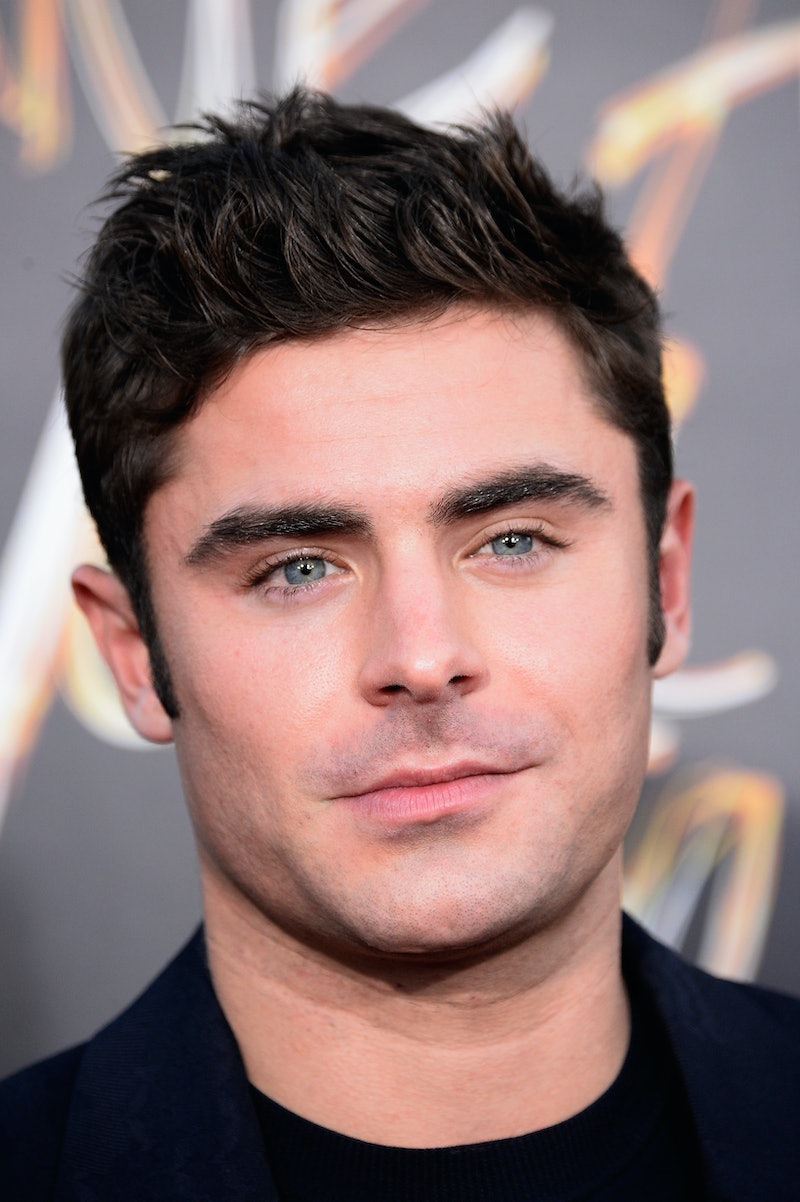 It's strange to think that once upon a time the Disney Channel TV movie High School Musical was all the rage. In 2006, I remember the songs being inescapable and stars Zac Efron and Vanessa Hudgens becoming instant household names at the time. In a fit of nostalgia, I decided to rewatch High School Musical as an adult and record my findings, because a lot has changed about Efron, Hudgens, and, well, me in the years since its premiere. Efron has become a movie star, fronting movies that have done awesome (Neighbors) and not-so-great (We Are Your Friends). Hudgens starred in Gigi on Broadway and performed at the Tony Awards. And I crossed into my 30s, that decade of life when you're supposed to be a real and legit adult.

High School Musical follows the romance of Troy (Efron), a basketball player, and Gabriella (Hudgens), an academic, who both happen to be totally talented singers. It was the Disney Channel's most-watched TV movie of 2006, totaling 7.7 million viewers. It spawned two sequels: High School Musical 2, which would air on Disney Channel in 2007, and High School Musical 3: Senior Year, which would be released theatrically in 2008. Then there was the ubiquitous soundtrack, which has sold more copies than any other TV soundtrack, according to Neilsen SoundScan.

Here's what was going through my mind as I watched High School Musical as a 30something-year old adult.

Allow me this one moment to say: OMG. That hair cut.

2. How Lucky Troy & Gabriella Are To Instantly Be Good At Karaoke

I'm not a very good singer. In fact, my stage anxiety often leads me to believe I'm the worst singer in the history of singers. But how lucky are Troy and Gabi to be pulled on stage and not make fools of themselves on stage? In fact, they rock the New Year's Eve teen party at the ski resort with their respective families. If only we could all be so lucky.

3. How Lucky Is It That Gabriella Goes To East High, Too!

Right after Troy and Gabi's awesome duet on vacation, somehow Gabi ends up at East High as well. What a coincidence! It's just like what happened with Sandy in Grease. If this weren't a high school musical, I'd say Troy should make sure Gabi isn't some kind of stalker.

4. Sharpay Is An Epic Mean Girl

In addition to having a killer name, Sharpay Evans (played by Ashley Tisdale) was so cunning and evil (in a Disney Channel kind of way). She's so fun to watch in her fabulous mean-girl bitchiness.

One thing that always annoyed me about this movie: Troy's basketball teammate Chad (played by Corbin Bleu) and the team was so against Troy expressing any interest in the school music. "Do you think Shaquille O'Neal or LeBron James ever auditioned for their high school musical?" he tells Troy. Really? Perhaps Chad is still traumatized from a viewing of Shaq's movie K azaam , but he'll need to see Trainwreck right away — LeBron James proves that you can equally adept at stealing baskets and movie scenes.

Also, Troy is very concerned about what colleges think of him. University admissions folk would probably love to see a musical and a sport on his activities list. Whether or not he has the time to do both is a whole other story, but it's TV, so I'm sure he can make the time.

6. Keeping Your Love Of Musicals A Secret Is Bizarre (& Sad)

There's an entire sequence in which Troy has to evade his basketball coach father in order to go attend the musical's audition. It's a funny, but odd sequence. I mean, I get it — Troy's dad wants him to concentrate on basketball, but Troy wants to explore his other talents (and his affections for Gabriella). Sure, it's not the most macho of things to like, but considering that this is the movie that made musicals cool for a whole new generation, it's kind of hilarious — and pretty sad.

7. "Stick To The Status Quo" Is A Song With A Terrible Message

I have always hated this song. It's a tune in which students express their dreams and yet the chorus shouts out them, "No, no, stick to the stuff you know" and to "stick to the status quo" to be cool. Really. It's such a discouraging song and, now as an adult, I hate the thought of some kids singing along to this and discouraging being and doing different things and escaping their comfort zone. Perhaps it's meant to be satire or sarcasm, since the end of this movie totally negates this song, but there is no hint of that in their happy voices.

8. The Only Basketball Advice Ever Given Is, "Get Your Head In The Game"

Who knew basketball was such a simple sport?

Is this supposed to be funny? It seems like a joke that never seems to pay off.

10. An Hour Into The Movie & I Still Have No Idea What The School's Musical Is About

They haven't even done callbacks yet! All the kids are constantly trying to convince Troy and Gabriella not to be together because they're too different. But what about the musical? What is it about? Is it about? Is it an original one or is it one from Broadway? Or is it the very one I'm watching right now?

11. Suddenly, Everyone Is Sorry

All of a sudden, Gabriella and Troy's friends come out of the woodwork to say they're sorry for sabotaging their relationship and maybe a relationship based on musicals between a basketball player and a nerd can work out. I have no idea what spurred these apologies, other than guilt and maybe realizing "Stick To The Status Quo" is a terrible song and belief.

12. The Movie Is 90 Percent Over And Callbacks Finally Started

I'm starting to suspect that there is no musical at East high school. It was just a mirage invented to bring Troy and Gabriella together. Oh, and callbacks conflict with both Gabriella and Troy's schedules for sitcom-ish dilemma.

13. We Never Get To See The Musical

Instead, a giant musical number erupts at the basketball game which totally shatters the "status quo."

I'm a little disappointed that I'll never get to see this mythical musical, but on the other hand, I just spent the last hour and a half watching this one, so I'm spent.