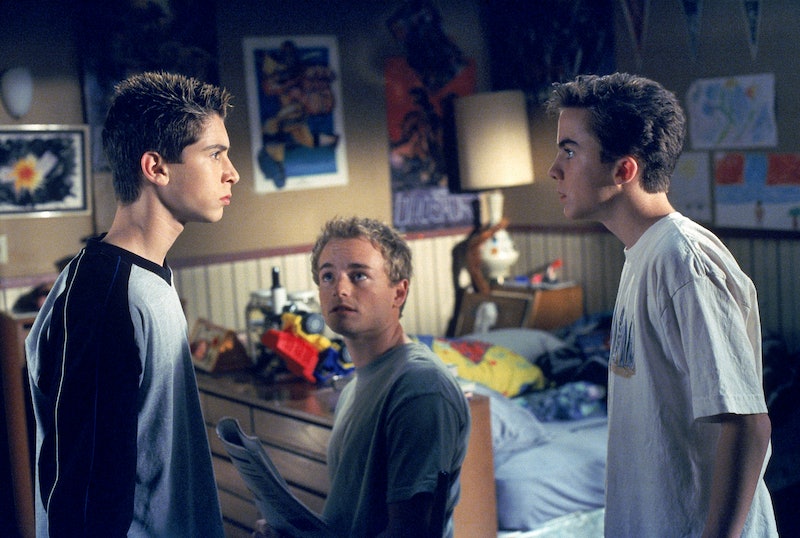 I want you to be sitting down when I deliver this news to you. Malcolm in the Middle premiered over 15 years ago. (I'm sorry, but someone had to tell you). It's okay, though, because the show's lead, and, if you've suffered from amnesia and forgotten, that's Frankie Muniz, has a Malcolm in the Middle reboot in mind. And by that I mean the actor tweeted out a kind of "what if?" teaser about where the characters from the show would be now. Don't play with our hearts, Muniz! In an era where all reboots are now not only possible, but, dare I say, on trend, this one doesn't seem too unfeasible.

I believe I speak for the masses when I say that this atypical family sitcom, featuring a doe-eyed young Muniz, definite spiky hair on at least one if not all four of the young actors, and a pre-meth drug lord Bryan Cranston, was my jaaaam after school. If you didn't come home and turn on the TV to sing along with the "You're Not the Boss of Me Now" theme song, and then have it suck in your head for the rest of the evening, then I don't know who are (nor can you be trusted).

After the world collectively joined forces to cross their fingers all together and at once — in hopes that such an effort would cause the TV Gods to stop what they are doing to make this dream a reality — Muniz confirmed that his tweet was only meant to "gage interest." Fine, Muniz, that's fair. (Cruel, but fair.)

But, really, what could we expect if by some miracle, a reboot would happen? Where would the show's most beloved characters be...15 years down the road? Let's speculate, shall we?

The mother and son feud lives on, and Francis will maintain his "I'm a FREE SPIRIT!" cover until the day he retires from that cubicle. Also, Francis is a legend, and that is all.

He's giving back, you know?

Because what else would a young genius, ivy-league grad have done in this day and age?

4. Dewey Becomes A Composer, Moves To L.A., And Marries A Real Housewife

She's a little old for him, but they make it work.

Or no grandchildren. Either way, G'bless.

6. Hal Is Nowhere to Be Found

Guys, seriously, have you seen Hal anywhere? He went missing a few years ago, and the family hasn't been able to locate him.

Whatever this family's been up to, I just hope they end up back on my TV screen.