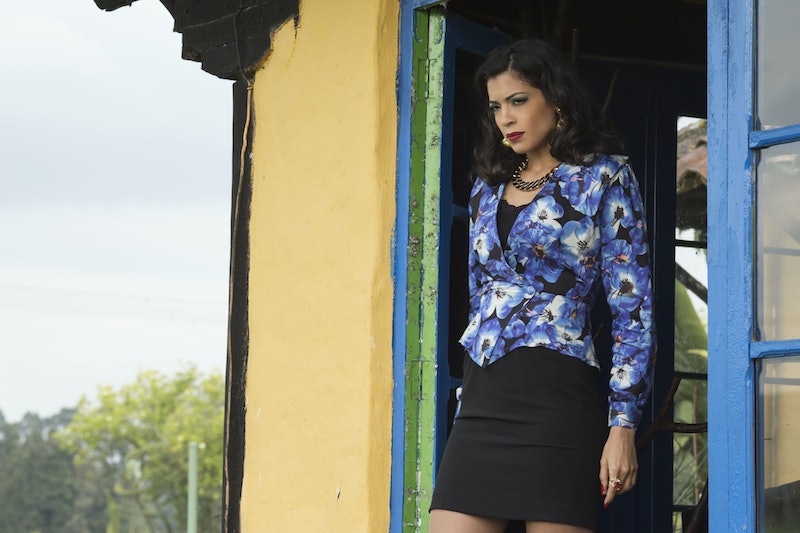 Narcos on Netflix is giving us a fictionalized look at the Medellín drug cartel in Colombia, but I'm just as fascinated by the real life individuals who inspired these characters. One, whose name has been changed, is Narcos' Valeria Velez — inspired by Virginia Vallejo. She is mostly based on a real person, with plenty of creative liberties taken for a personal touch. The journalist, who is played by Spectre star Stephanie Sigman on the Netflix series, has struck up a romance with Pablo Escobar, but how much of that is real? Who is Virginia Vallejo?

One cool lady, that's who. According to her official website, Vallejo is a Colombian writer and media personality with several accolades who currently resides in the United States after seeking political asylum in 2006. She has spoken out against several Colombian politicians and accused them of affiliating with the cartel, as well as generally assisting the criminal justice system with information. She came from a privileged background and was in fact in a relationship with Escobar for five years. She has testified against many drug trials and escaped attacks on her own life. She later wrote a memoir about her infamous love affair and became a best-selling Spanish author in the United States. Here's an interview she did for Canal, to give you a taste of what the real Vallejo is like:

In fact, you should be hearing more from "the real Valeria Velez" in the next few months or year. Virginia Vallejo's novel, Loving Pablo; Hating Escobar will be released in English in 2016. Her writing has also been adapted into a movie called Escobar starring Javier Bardem as Pablo and Penelope Cruz as Virginia. These other projects, in my opinion, may be why Narcos changed her name. She's also still in danger, while relatively safe and openly expressing her opinion in this country, from threats and attacks on her person and character in Colombia. That, or the producers of Narcos wanted the liberty to invent additional details or motivations for her character.

Knowing this, I think it would be interesting to watch how much Velez observes from the inside on Narcos. She's definitely more than a love interest, which is super cool! It's cool to think of a character who represents the softer side of a show's "villan" being one of the most dangerous characters to everyone involved.