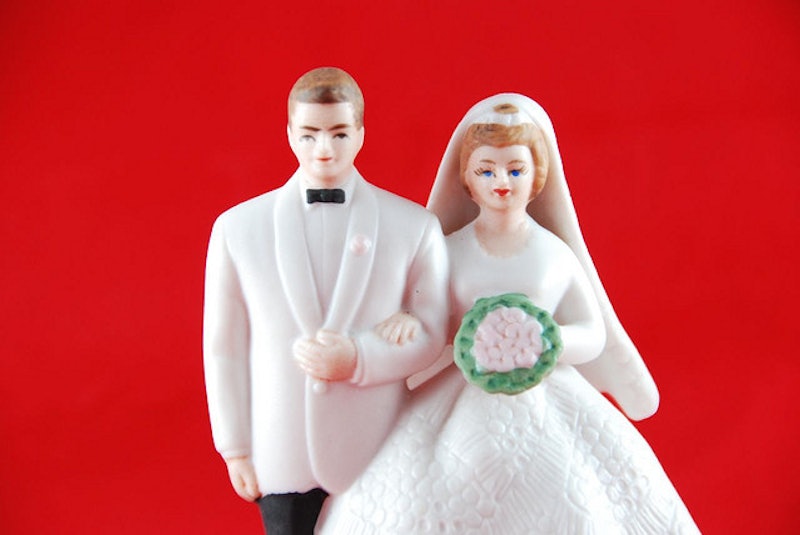 Growing up, a favorite Sunday pastime with my mom was scouring the New York Times' Wedding section for the couple who most closely resembled one another. It was usually a close race. Thus, when I heard about the wedding parody Twitter account @NYTVows courtesy of The Frisky, I was an immediate fan.

The brainchild of writer and comedian Selena Coppock, @NYTVows pokes fun at the delightfully snobby verbiage of the New York Times' Vows section. For those of you unfamiliar with this column, it's a lot of archaic Ive League degrees, a lot of WASP-y nicknames that in no way relate to a person's actual name, and a lot of posturing about historically important lineage. Bonus points for arriving on the Mayflower.

As part of the Wedding section, the Times covers one wedding every Sunday, providing all the gory details for who the bride and groom are, who their parents are, who their grandparents are, how they met, how many degrees they have, and the overall "feel" of the wedding itself. It's a weekly treat and everyone should read them. I mean, congratulations to the happy couples and all — obviously the union of two people who love each other a whole bunch is a good thing, and I'm definitely not knocking that — but to be honest, most of us can't relate to the couples detailed in Vows. Like, at all. It's sort of a "how the other half live" kind of situation, you know?

So we're going to play a little game: Who said it, Vows, or @NYTVows? Are you up for the challenge? Do you know your parody wedding announcements from your actual ones? Let's find out!

1. "[They] go by Topper and Gigi and own a Greenwich tchotchke store of the same name."

Who said it: Vows or @NYTVows?

2. [He] cooked his family foods that were exotic at the time like Mandarin chicken (always accompanied with wine — and never television) and hosted wine and cheese tastings.

Who said it: Vows or @NYTVows?

Answer: Vows! Brought Together By A Love of Shared Wine. Delightful.

3. “I don’t balk at any kind of work,” said [she], who looks like Kate Hudson and speaks in succinct, grammatically correct sentences.

Answer: Vows! Embracing An Adventure of a Lifetime. Spoiler: The "adventure" is fixing up the bride's family mansion in upstate New York.

4. The bride and groom met on the Hampton Jitney, the only form of public transportation that either has ever ridden.

5. [She] may not have known what sort of man she would eventually fall for, but she knew precisely what sort of engagement ring she wanted, and no other ring would do.

Answer: Vows! He Can Stand the Heat in the Kitchen. True love.

Check out more comedy at @NYTVows, and check out the actual New York Times Vows archives here. You know you want to.