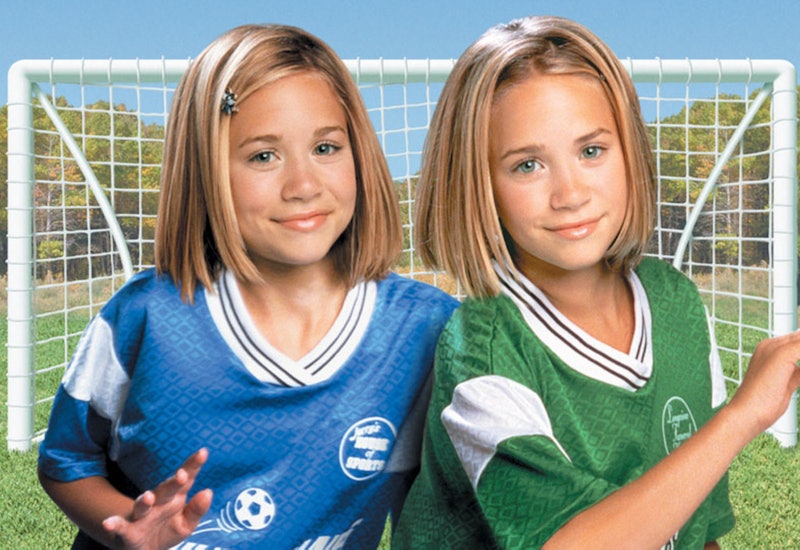 In 1999 Mary-Kate and Ashley Olsen attempted to pull off the old trading places routine so they can play on soccer teams more suited for themselves. Of course, plans like that never actually work out. Sorry, did I just spoil the movie? It’s been 16 years since Switching Goals came out, and while it wasn’t one of my favorite Mary-Kate and Ashley movies, I pretty much love any movie with the two of them. I decided it had been probably about 15 years since I last watched the film, and it was time to re-visit Sam and Emma Stanton to see all those random things I never noticed when I was younger.

The plot of this movie is super simple. Sam Stanton is a tomboy who is great at sports (I’ll give you one guess which twin this is) and Emma is a girly-girl who is great at talking to boys. In an attempt to bond with his girly daughter, their father, a local soccer coach, picks Emma in the first round of the draft and Sam gets stuck with the less-than-motivated team. Realizing they would be happier on the opposite teams, the twins switch places. I bet you can guess the rest.

Here are some things I never noticed about the film until I sat down to re-watch it.

You definitely won’t recognize his name, but Eric Lutes came back in the early 2000s to play the twins’ dad on TV in their short-lived show So Little Time. He’s also famous for playing Del Cassidy on Caroline in The City, a famous '90s show.

2. There Was A Super Anti-Feminist Moment

When the male soccer coaches found out that the league was going co-ed, all of them were super pissed they had to draft girls onto the team because obviously girls aren’t as good as boys. Get with the times, men.

3. The Dad Is Kind Of Awful To Emma

The mom practically has to force him to talk to his daughter and forces him to pick her first in the draft. He pretty much doesn't even want to talk to her. It’s really weird.

5. Willard, The Other Soccer Coach

No offense, but he's kind of off his rocker and maybe shouldn't be around kids.

We almost forgot they were a thing, but Switching Goals will be a reminder forever.