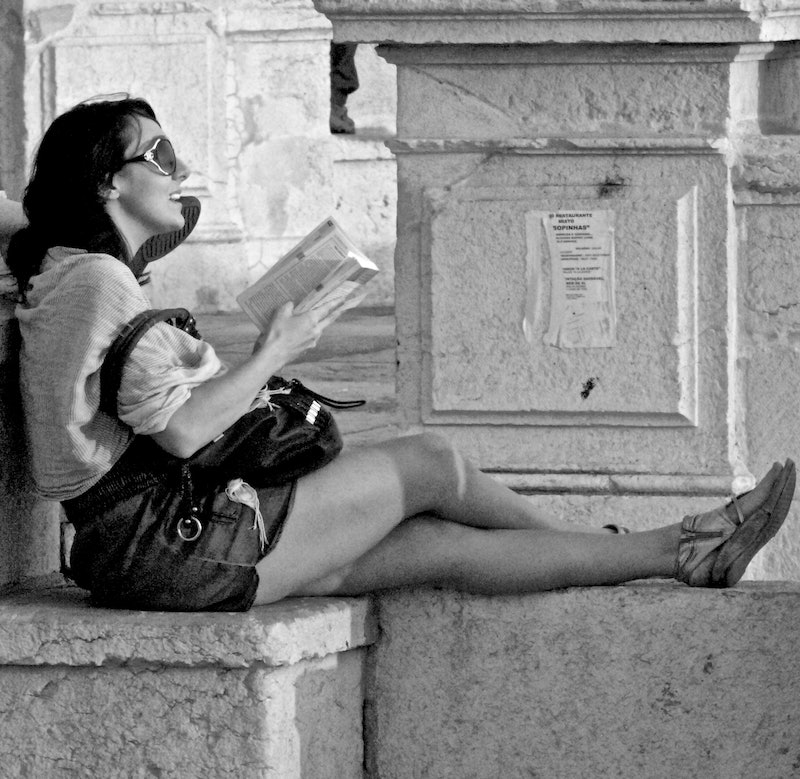 OK, so, first: What exactly is a casual reader? Lots of people think that being a casual reader just means you don’t read that much. But lots of people don’t have time to read hundreds of books a year. That doesn’t make them all casual readers, however. You can be a very serious reader who only manages to squeeze in reading time on the weekends. What makes a reader casual is more about how you read and why you read than about how much you read.

Is Everyone Hanging Out Without Me? by Mindy Kaling

Maybe the reason you’re looking for a good book to read is because you were really hoping to hang out this weekend, but all your friends are unexpectedly busy. Then this is the book for you. It’s a fun, funny read that’ll make you feel like you’re hanging out with your best friend… you know, the quirky one who’s wonderfully flawed but still always gives you the best advice about everything.

It is insane what our brains can do, and it’s even stranger what happens when things go wrong. This is one of the late great Oliver Sacks’ most popular books. A top neurologist, he writes offers up the case histories of people who suffer from neurological disorders that make them behave in strange ways, like the man who woke up one day and was absolutely certain the leg lying in his bed wasn’t his…

This one is for if you’ve always wanted to read Jane Austen, but don’t think you have it in you to slog through all the social propriety and quiet romance stuff. Northanger Abbey is Austen’s most adventurous novel, complete with gothic castles, dark family secrets, and everything else a young girl’s wild imagination could dream up.

The Other Boleyn Girl by Philippa Gregory

What could be more exciting than being smack dab in the middle of court intrigue? It’s not exactly historically accurate (like at all, really), but that’s half the fun. Wouldn’t you rather read about a dangerous game of secrets and manipulation as two rival aristocratic sisters face-off against each other, the king, and the court to secure a position as queen… or at least just keep themselves off the guillotine. It’s sort of like the (very slightly more) real Game of Thrones… there aren’t any dragons though.

The Black Count by Tom Reiss

Now, if you want some actual history, you can’t go wrong with The Black Count. Have you heard of Alex Dumas? No? Well, you know the stories of The Three Musketeers? The Count of Montecristo? Yeah, well, those stories are based off of the real-life stories of this guy. From Haiti to France, Alex Dumas Sr. had some seriously crazy adventures, and his son used papa Dumas’ insane life as inspiration for his own adventure stories. The Black Count tells that the real life story, and it’s no less amazing than the stories it inspired. Trust me, you’ll be hooked.

If gunslinging and crime rings are more your style, Elmore Leonard is your man. Thanks to the popular show Justified, Raylan Givens is one of Leonard’s most popular characters — a witty, short-tempered, quick-drawing law man from Kentucky. It’s a lot like a modern western mixed with a bit of noir. You’ll love it even without Timothy Olyphant’s dreamy eyes to gaze into (though you can totally just picture Timothy Olyphant while you read it, too).

If Mary Roach isn’t already one of your favorite science writers, she’s about to be. Gulp will teach you everything you never knew you wanted to know (and some stuff you really wish you didn’t know) about the eating process — from your taste buds all the way down to our (frankly impressive)... -er… evacuation systems. Roach is also hilarious and uses super-straight-forward language, so don’t worry, reading this book will be nothing like office hours with your Biology professor who’s always crossing the TMI line.

A Discovery of Witches by Deborah Harkness

You know those times you were sitting in the library poring over some boring textbook or other, and you imagined for a second that you were actually a witch or princess or some other magical (and, of course, wildly important) creature, so you could pack up your studies and go save the world or something? Well this is that story. Harkness gives you all the goods — life or death adventure, time-travel, magic, romance, and, of course, a sexy vampire, too.

Soon I Will Be Invincible by Austin Grossman

Obsessed with Arrow or the Spider-man movies, but really wish you could see a fresh take on the whole superhero always beats the bad guy thing? This is where Soon I Will Be Invincible comes in. It takes all the tropes and archetypes of comic books and superhero fiction and toys with them, flipping them on their heads, poking fun, and paying homage to them. It’s sort of like The Watchmen in a way, but instead of being kind of depressing, it’s hilarious and fun. It’s sort of like seeing the real* Superman after the credits roll and he wakes up with bad breath and his hair a mess.

The Warmth of Other Suns by Isabel Wilkerson

To look at it, you wouldn’t think this would be a book for a casual reader, but holy crap is the writing beautiful! It’s so fluid that you’ll find yourself breezing right through it and having a hard time putting it down. Plus, if you’re a history buff, you’ll be taken with the stories of the people living through one of the biggest migrations in American history.

The Shadow of the Wind by Carlos Ruiz Zafón

It’s got mystery, murder, dark secrets, epic-level romance, a Cemetery of Forgotten Books and maybe, possibly, even the Devil himself. It’s not so breezy a novel as you might expect to be on a list of books for casual readers. The plot gets pretty complex actually, but it is insanely absorbing and magical and mysterious. You seriously won’t be able to put it down after page one. Besides, who says casual readers can’t read complex books, anyway?

If you’re looking for a really well written, super-detailed, epic adventure story, then lucky you that Lone Wolf and Cub exists. It follows the adventures of a warrior turned assassin and his son as they travel through Tokugawa era Japan, working as assassins for hire and seeking revenge on the clan that forced them into exile. On top of the seriously epic storyline, Koike did his homework and offers up lots of interesting details on historical Japanese traditions. It’s also got super pretty art. Oh, and the young Daigorō is just *too* adorable for words (even when he’s helping dad out with an assassination or two).

It might be some 600 pages, but trust me, you’ll blaze through this one and then suffer withdrawals from last page syndrome. An epic adventure complete with war, passion, tragedy, adventure, and a little time travel for good measure, Outlander has a heroine torn not just between two men but two totally different lives… in two totally different time periods. Yeah, good luck putting this one down, casual reader or no.