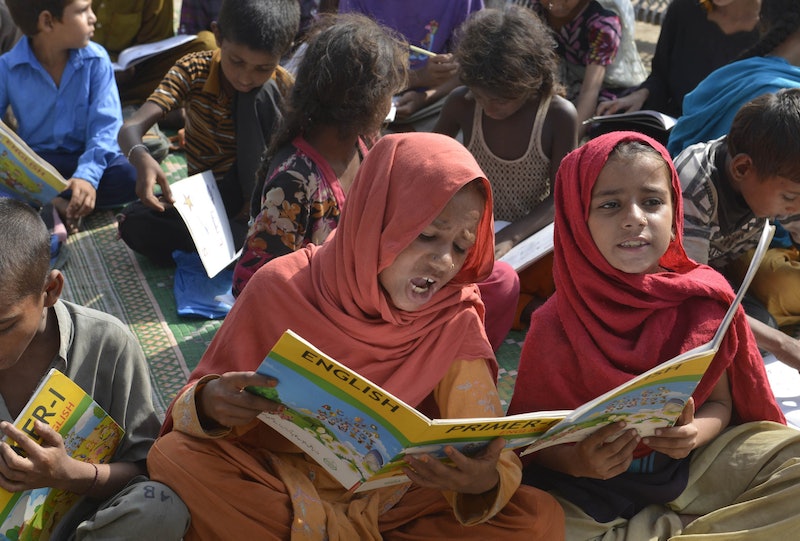 As a person who lives just a few blocks from both a library and a bookstore (not to mention, has high speed Internet in her home), I too often take my access to books and my ability to read for granted. After all, what does one more book mean when you have whole shelves of them? It's easy to forget that much of the rest of the world is not so lucky: globally, an estimated 775 million people are functionally illiterate, meaning that they lack the basic reading and writing skills needed for daily life. In 1965, UNESCO declared September 8 International Literacy Day to raise awareness of this problem, so today there are events at schools and libraries all over the world in support of global literacy.

Universal literacy is a key goal for the international community, but progress has been slow. I’ve gathered six of the most important facts about global illiteracy — especially how it affects women — that show how far we still have to go. Nonetheless, the overall decrease in illiteracy and the general trend toward gender parity are encouraging reminders that challenging isn’t the same as impossible. Maybe you’ll even be inspired to support the efforts of the many organizations fighting for universal access to education all over the world.

Declaring literacy a human rights issue may seem extreme, but stop and think about all the ways you use written language: not only to read lists on the Internet, but also to study every subject in school (even math), to text your friends, to make sense of employment agreements and rental leases, to email your mom, and to decipher the nutritional values of your food. Reading is so fundamental to our day to day lives that it's almost impossible to imagine not being able to do it. If that's not a fundamental human right, I'm not sure what is.

Literacy Is Especially Important For Women

The more years girls spend in school, the older they'll be when they get married, the fewer children they'll have, the more money they'll make, and the less likely they are to die in childbirth. The statistics are seemingly endless, but what it comes down to is that women who can read have measurably better lives than those who can't. Just as importantly, this benefit extends to their children: a baby born to a literate mother is 50% more likely to survive past the age of five than one born to an illiterate mother.

Unfortunately, literacy rates among women still lag behind those for men. According to UNESCO, 63% of all illiterates are female, and the global literacy rate for women is 81%, compared to 89% for men. That gap grows in areas with lower overall literacy rates: in Sub-Saharan Africa, 68% of men are literate versus 52% of women, and in South and West Asia the difference is even greater, with a literacy rate of 77% for men and 58% for women.

Probably the most depressing literacy statistic is that the percent of children enrolled in primary school in Sub-Saharan Africa has dropped from 58% to 50% since 1980. Not only has the situation not gotten better, it's actually gotten worse.

Adult Literacy Remains A Serious Concern In The United States

It would be easy to write off illiteracy as problem that only developing countries face, but the truth is that even in the US illiteracy is a major issue: a 2013 study by the Department of Education found that 14% of American adults couldn't read. Those 32 million individuals are far more likely to be poor, to go to prison, and even to face major health crises.

More like this
Romance Authors Are Mobilizing For Reproductive Rights
By Natalia Perez-Gonzalez
Women Around The World Are Cutting Their Hair In Solidarity With Mahsa Amini
By Darshita Goyal
Black Women's Equal Pay Day Highlights An Upsetting Problem
By Brandi Neal
What Is A "Hot Girl Book" & Why Is Everyone Talking About Them?
By Samantha Leach
Get Even More From Bustle — Sign Up For The Newsletter